Lines have been drawn, the symbolic moral high road taken, and the demands for social acceptance...um... demanded in the latest showdown between Christians and homosexuals in the War on Marriage/ Battle for Marriage Equality. (It all depends on which side of the fence you're on. But everyone seems to agree that they are engaged in combat of some sort.) 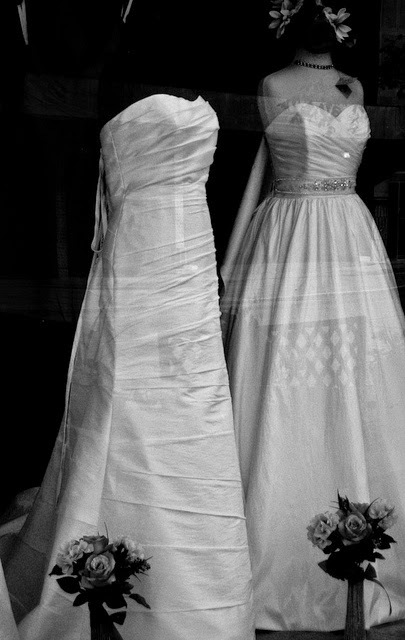 A bridal boutique in central Pennsylvania has allegedly refused service to a lesbian couple citing her religious beliefs as the reason. Owner of W. W. Bridal Boutique, Victoria Miller told newspaper reporters that "providing those girls dresses for a sanctified marriage would break God's law." The spurned couple turned to social media for justice and out of the woodwork swarmed supporters... both for the dressless women and for the boutique owner.

You might remember a similar incident from back in 2012, when a Colorado baker refused to sell a wedding cake for a gay couple's wedding reception. Jack Phillips, owner of Masterpiece Cakeshop, was found guilty of discrimination after a lengthy court battle, was told by the court that he must make wedding cakes for gay couples, and was ordered to take a "diversity course" to help him be more sensitive to the rights and feelings of minority groups (which kind of sounds like an attempt at government thought control, but I may just be paranoid). Since the ruling, Phillips has stopped taking orders for wedding cakes of any kind (Way to stick it to the man, Phillips.)

Like with the Colorado wedding cake controversy, the Pennsylvania wedding dress fiasco has caused both sides of the marriage conflict to come out swinging ("Coming out" pun intended. but only for the marriage equality side of this issue). Proponents for gay marriage are screaming for equal rights and fair treatment and the right to designer wedding gowns and fabulous multi-tiered baked goods. Christians are crying for religious freedom and moral standards and the right to follow their conscience, even when it leaves them seeming closed-minded and more than a little bigoted.

On both sides of this battlefield, the armies of ideology see the issue as completely black and white. And they are convinced that their side is right and the opposing side is wrong.

Both sides are right.

Christians (at least many of them), who see homosexual behavior as a sin, want no part in the wedding services or receptions of same sex couples. To them, marriage is seen as the binding of two individuals both spiritually and physically, and a wedding reception is the celebration of that union.  By providing bridal gowns or a wedding cake or flowers or tiddlywinks for a marriage ceremony or reception, many Christian business owners feel they are supporting or enabling or even celebrating a perversion condemned by their God. These business owners aren't refusing to serve homosexuals just because they are homosexuals (because that would just make them assholes).  They aren't refusing to provide birthday cakes or party dresses.  They just don't want to provide products or services in contribution to celebrations of homosexual marriages.  It's against their religious beliefs. And last time I checked, there was this neat little thing in this country called freedom of religion. It was so important to our country's founding fathers that it was spelled out in the very first amendment to the Constitution: "Congress shall make no law respecting an establishment of religion, or  prohibiting the free exercise thereof..."

Homosexuals (and other proponents of marriage equality) believe all Americans should have the right to marry. Homosexual couples seek the same basic fundamental rights and protections provided heterosexual married couples under the law. And this is a serious issue. If marriage were only a sacrament, if it were only a spiritual or religious union, we might wonder why homosexuals would seek a religious rite from a Church that has largely turned it's back on them. However, there are certain privileges to marriage that surpass religion and hocus pocus spiritual oneness. There are laws (which vary somewhat from state to state) that confer many rights, protections, and benefits to legally married couples (Doesn't it always get overly complicated when the government gets involved?). Here's a short list:

The institution of marriage is far more than a celebration of sexual relations. There are too many legal and social implications of marriage that drive the issue into the realm of civil rights.

If homosexuals don't view their relationships as sin, yet they are denied access to the rights and privileges of marriage based on the religious beliefs of others, that does seem like a civil rights issue. If laws are made that keep certain couples from legal matrimony based on religious definitions of marriage, that seems like a government establishment of religion... which was a huge no-no in the eyes of the founding fathers. It's right there in the very first amendment to the Constitution: "Congress shall make no law respecting an establishment of religion, or  prohibiting the free exercise thereof..."

But do they really need fancy white dresses and wedding cakes?  And do they need to buy them from Christian businesses?  And should those businesses be forced to provide their services?

You see, just as both sides of this battle are right... both sides are just as equally wrong.

I can't seem to see why a homosexual couple would even want to spend their consumer dollars with a business that doesn't support their basic civil rights. So when a Christian business refuses wedding services to a gay couple... they could just head down the street to the next bakery shop or bridal boutique and spend their money at a business that might be more in line with their values and principles. And it is completely possible to do this quietly and without fanfare, no news coverage required. It is a viable option to just walk away and respect the fact that there are people in this world who think differently than you. It's called tolerance, and I find it horribly ironic that a population of people who rally for acceptance, respect, and tolerance for their lifestyle and beliefs are often the most unaccepting, disrespectful, and intolerant of those who view things differently than they do. When a marriage celebration becomes a political statement and a media circus, one must wonder how sincere the wedding vows are.

And for Christian business owners, certainly you realize that you are servicing sinners everyday. If it is true that all sin is equal in the eyes of your God, then selling your wedding trinkets to previously divorced couples, or couples who have had premarital sex, or had multiple sexual partners, or even if the wedding being planned is overly ostentatious (since surely gluttony is just as heinous as any sexual sin) should stir your conscience into quite a tizzy. Why single out the sin of homosexuality?

As business owners in (what is supposed to be) a free country, you certainly have the right to stand on your own principles and decide who your customers will be, but remember that does not free you from the possible consequences of your actions. By denying your services to one customer based on their sexual orientation, there very well may be a tsunami of social backlash that could drive you right out of business. Besides, it baffles me that in this economy any business is turning away customers of any kind.

Also, please remember that when you refuse service to a homosexual couple, you make all Christians look bad, whether you mean to or not. Sometimes standing on your principles just makes you look like a hate-filled, closed-minded bully. You are not going to save people from their sins by alienating them. Perhaps by focusing on the Christian virtues of humility, gentleness, and love you could do more for sinners who saunter into your shops... and do more for the world at large. But it's just a thought.

But those aren't exactly war-like tendencies, are they?

And who doesn't love a good skirmish?