Because I'm feeling nostalgic (and it's been a super-busy week that hasn't afforded me much time to actually sit down and write), I thought I'd share a little blast from the past.  The following article is one that was printed way back in May 2011 in my then monthly newspaper column The Nature of Tarboro.  The local newspaper, The Daily Southerner, crumbled earlier this year after a long rich (although often grammatically incorrect and horribly misspelled) history.  Rest in peace, Southerner.

“Oh!  You live in the house with all the kids!”

I can’t tell you the number of times I have had this response from people when I tell them where I live.  Obviously a yard full of youngsters leaves an impression on an individual.  While my family may be larger than the national average, I’m not certain having four children is enough to be labeled “the house with all the kids”.  But my children do play outside a lot, in all kinds of weather, all year long, and that is an anomaly in our current culture of excessive electronics and over scheduling.  People notice the children playing in my yard because they just don’t see many children playing outside at all.

When I was a child, kids lived outside.  We rode our bicycles until dark, we played in drainage ditches catching crayfish and minnows, we ran barefooted, we threw rocks and ran with sticks…all outside, and all without the constant stifling supervision of adults. 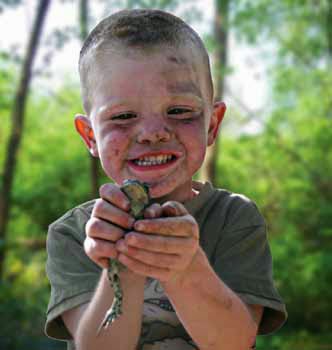 Ask anyone over the age of 35 about their most cherished memories of childhood and few will be indoors.  It is freewheeling play outdoors that we remember, usually away from the eyes of grown-ups.  With recent studies indicating that children in the United States only spend an average of thirty minutes of unstructured playtime outdoors each week, today’s children are highly unlikely to have the same memorable experiences.

Being a kid isn't what it used to be.  In a single generation, the axiomatic character of American childhood has shifted. The unstructured outdoor childhood has all but faded from existence.

Today’s kids grow up indoors isolated from their natural surroundings, exposed to the electronic media of video games, the internet, and  television, or finishing copious amounts of homework due to a cultural push to succeed.  When they do venture outdoors, it is typically for some organized event, baseball camp or soccer leagues, all held under the watchful eye of adults.   There is no creativity or freedom to explore.

Parents are just plain afraid to let their kids play unfettered outside.  A fear of germs, West Nile Virus, Lyme disease, ultra-violet radiation, and “stranger danger” leave parents feeling little Timmy is safer inside in front of the X-box 360 rather than exploring, pretending, and creating outdoors.

But children need to be outside, and a lengthening list of scientific studies is revealing the importance of unstructured outdoor play.

The most visible symptom of society’s decline in outdoor play is the rise in obesity.  The Institute of Medicine reports that over the past 30 years, childhood obesity has more than tripled for children ages 6-11.  It’s not difficult to conclude that the decrease in free outdoor play has contributed to this growing problem.

Unstructured outdoor play improves problem-solving skills and concentration.   Socially, it improves adaptability and cooperation.  Have you ever watched a group of children organize a game of stick ball?  They figure it out all on their own, without adult-imposed rules and supervision.  And they take away from the experience skills of negotiation and compromise that will benefit them as adults.  Children who play outside also benefit from a reduction in aggression and increased feelings of well-being.  "Children will be smarter, better able to get along with others, healthier and happier when they have regular opportunities for free and unstructured play in the out-of-doors," concluded one study published by the American Medical Association in 2005.

The outdoors isn't just a place for children to experience nature; it’s a place for them to experience themselves.  Climbing a tree isn't just about seeing how high little Timmy can climb; it’s also about him learning to take responsibility for himself and learn his own limitations.  And falling out of that tree is a great lesson in weighing risk and reward.

Basically we as parents need to brave the threat of skinned knees, mosquito bites, and sunburn and just allow our kids to be outside.  We need to let them organize neighborhood games of touch football and freeze tag.  Let them build forts and catch bugs.  Let them squish their bare toes in fresh mud, even if they track it in through the kitchen.  Let them set their own challenges, take their own risks, and have their own adventures.  If we want our children to be happy and healthy and socially well-adjusted, we need to get them out from behind those “safe” computer screens and out into the glorious outdoors.  Let them come in smelling like sweat and sunshine.

Take it outside.  The reward is worth the risk.
Posted by Alice Jones Webb at 10:07 AM