Like the majority of moms out there, I love to embrace any and all opportunities to brag about my children. Since I have a blog, I get to brag to a whole heck-of-a-lot more people. (It's really one of the few perks, along with free life advice from nasty internet trolls.) Fortunately for me, my children give me an abundance of opportunities to brag about them. (They are pretty awesome kids even though they routinely forget to take out the garbage.)

Saturday my two middle children tested for their junior black belts in Isshinryu Karate. It was an epic test of endurance and sweat and skill and tears. It was emotional for them and me. And at the end, they received their hard-earned belts and all of the rank and privilege that come with them. I was full of so much pride that it welled to overflowing, causing a bit to leak out of the corners of my eyes. I promise they weren't tears.  That was liquid pride!

While the test largely focused on the rote knowledge of karate history and their physical ability to throw a punch or perform a kata, there are certainly an abundance of other things they've learned along the way. Their scores reflected what their examiners saw with their eyes, at that moment, on that particular day. However, there are real and important things they've learned through martial arts that were not reflected in their test scores. Like Albert Einstein said, "Everything that can be counted does not necessarily count; everything that counts cannot necessarily be counted." 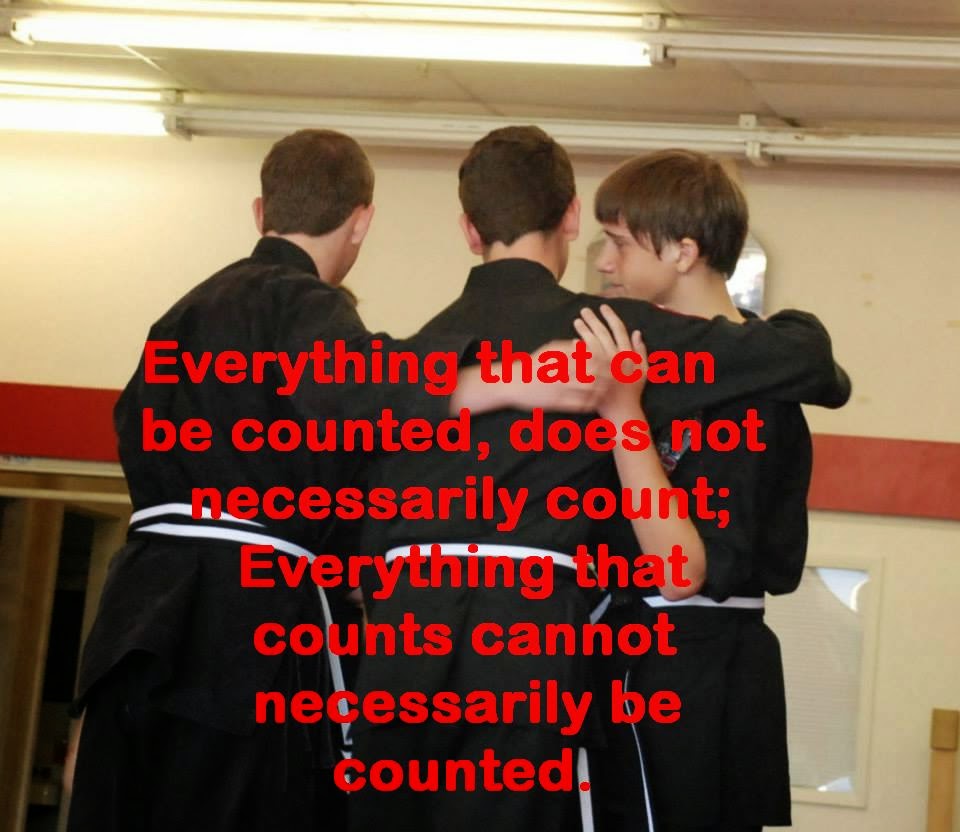 Here are the major life lessons that martial arts has given to my children:

1. Commitment Is Not the Same As Passion. My kids were so excited on their first day of karate class. Probably for the first several months, they looked forward to class like they would an amusement park trip or a birthday party. But as time passed, the newness and excitement started to wear off.  Karate didn't seem so fun anymore, but it wasn't the fun that kept them training in the dojo. It was commitment and dedication.

You might hear motivational speakers preach that if you want to achieve a goal, you must want it with undying passion, that you must desire success as badly as a drowning man desires oxygen. But once you've spent months upon months training with no vacation or off-season, waking up sore and tired, wishing you could just stay home and watch tv, but training anyway, you'll understand that desire isn't what keeps you going.  Many times my children had an incredible desire to just stay home and play video games (an immediate desire which I assure you was often stronger than their immediate desire to reach black belt).

2. Failure Is Not Always Negative.  Through years of martial arts training, my children have failed more times than can be counted. In fact, they fail on a regular basis. They take punches that hurt. They are thrown, kicked, and knocked down. They have been forced to submit by people with far more skill than they possess.  Week after week, month after month, year after year, they have made mistakes and lost matches.

Over time, they began to realize that the major difference between them and the higher ranking black belts had nothing to do with black belt super powers or their own general level of suckage. The major difference between them and the black belt who completely owns them on the mat, is that the black belt has simply failed more times. So every time one of my kids failed to block a punch, or got kicked in the ribs because their guard was down, or got submitted by armbar, they got up off the mat, dusted themselves off, and learned from the experience.

In life, like in karate, one must fail many times before success is reached. Society's most successful people got to where they are by failing many, many times. Nobody gets it right on the first try. The martial artist learns that failure isn't a negative thing.  He learns to see it as a necessary step to success. He learns that failure isn't the end, that he just needs to get back up, learn from the experience, and try again.

3. The Importance of Interdependence. Parents often sign their children up for martial arts classes in the hopes that their little ones will become more independent.  While martial arts can definitely help create independence by developing a sense of individual pride through hard work, achievement and healthy competition, martial arts also has an incredible ability to promote a vital connectivity and sense of belonging. It creates community.  My children often refer to their training partners as their "dojo family".

Somewhere along the way, they realized that every class isn't a competition. That when one student improves, the entire class improves. That their training partners are there to help them improve, not to make them look bad. That without each other, they would get nowhere.

In a society that often glorifies independence and views interdependence as a weakness, my children instead see the value of cooperation and collaboration. I watched them work together with their fellow testing candidates to prepare for their tests.  They coached each other on throws and fighting technique and details of kata.  They quizzed each other on vocabulary and shared history notes.  During the test they offered support and encouragement to one another, even in the midst of grueling sparring matches.  When one of them got knocked down, someone else was there to reach out their hand to lift them back up. And when they finished the test, they celebrated as a community with tears, and hugs, and high fives.

In life, the most successful people are not entirely independent.  They find strength and greatness in interdependence. By combining their strengths and talents with the strengths and talents of others, they reap even better results and create community along the way. For my children, martial arts gave them their first experience with interdependence (at least outside of their biological family).

4. Most Of Our Limits Are Set In Our Own Minds. While it's true that your elbow will only straighten so far before ligaments pop, most of our limits aren't physical. I've watched my children push themselves through one more rep, one more roll, to take just one more punch when they sincerely  thought they couldn't. Most of their limits weren't physical, but mental, and mental limits can be pushed and stretched. Growth happens outside of their comfort zones, and martial arts has a way of constantly pushing past those zones.

I watched my children, at the end of a physically taxing two and a half hour test, sweaty and exhausted, having been beaten and bruised, when everything inside of them screamed to just give up, reach down inside of themselves for a determination and resolve they didn't know they had (And quite frankly, I didn't know they had either). With character and courage, they persevered.

5. Stop And Smell The Flowers on The Side of the Highway.  Martial arts has a way of forcing mindfulness. It's incredibly difficult to think about unfinished homework, or a bad test grade, or this afternoon's nasty argument with a best friend while someone is actively attempting to side kick them in the ribs. In the midst of battle, it is nearly impossible (and incredibly unwise) to think about anything other than what is happening right in front of them. Their minds must be entirely focused on the moment, otherwise they're going to get the breath knocked out of them.

We live in a culture that glorifies achievement and focuses on future rewards. College graduation. The next career advancement or salary increase. The two weeks worth of vacation coming up. Retirement. While peering off into the future, we miss the beauty of our everyday lives.

In martial arts the next new new belt color or shiny tournament trophies seem cool, but the meat of martial arts is to be found in the process of improvement, the discovering of new techniques, the hard lessons learned, the obstacles overcome.

My children have learned through their training to appreciate the process (hopefully) without fixating on any one goal. They are better able to focus on  what's directly in front of them, in the present, instead of constantly wishing their lives away off into a distant future. Like focusing on one incoming punch at a time, they can focus on what they can improve in their martial arts (and in themselves) today, rather than being overwhelmed with what they can't see coming in the future. They are better able to enjoy the journey of life, one step at a time, instead of worrying about their destination.

...But they'll be ready for whatever's coming, too.  That's why they learned to keep their guard up.

And because I haven't finished bragging about my awesome kids, here are some pictures. Because these kids are awesome! 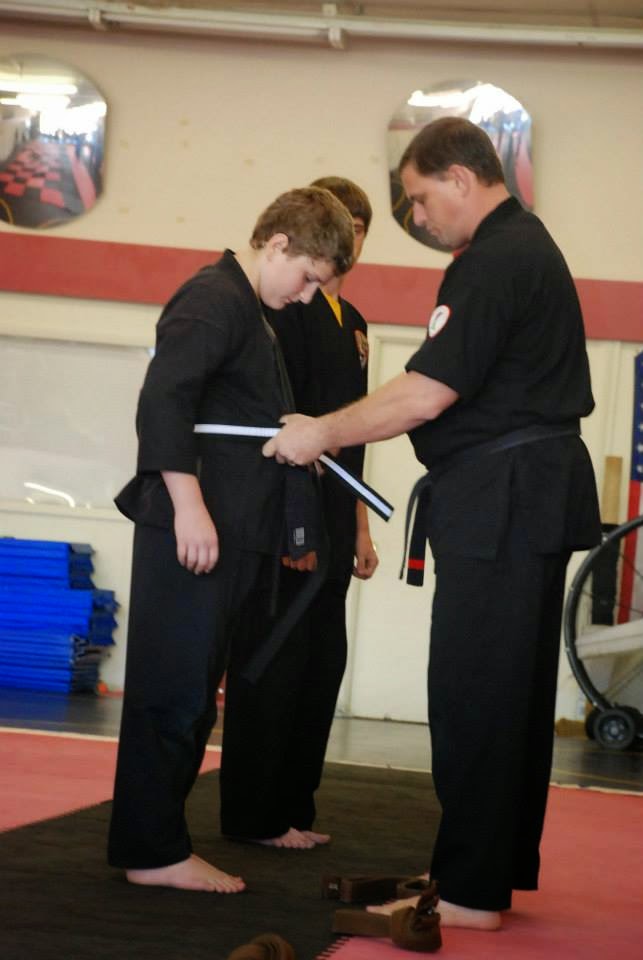 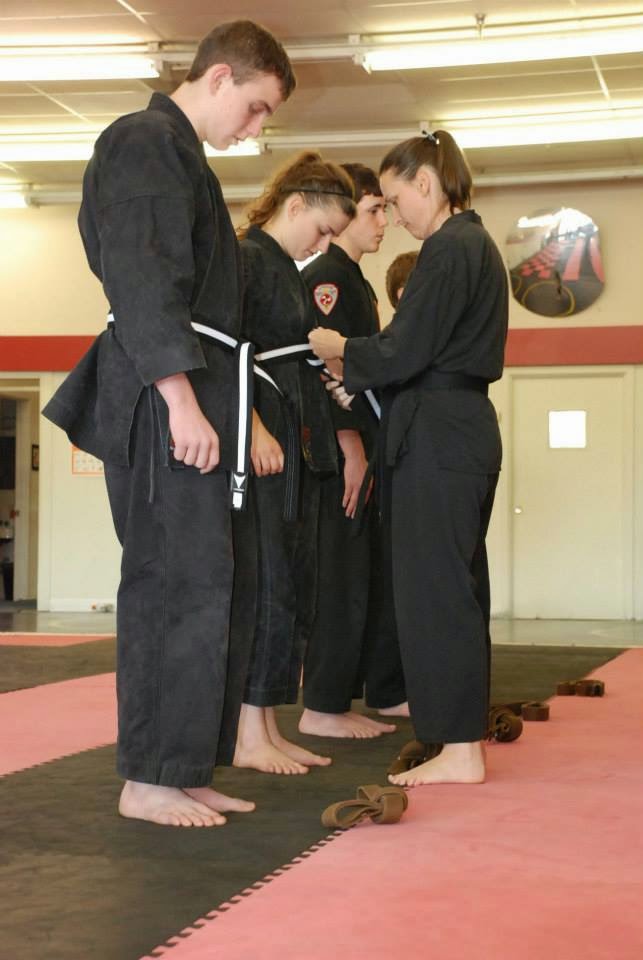 Your kids are awesome, Alice, just like you are. Loved reading about the importance of interdependence as well as taking time to enjoy life. You are an inspiration.

There are many benefits to training, boxing, but everybody must be sure the training center is good or not for boxing. It's main issue to take a boxing training Kids Brazilian Jiu-jitsu in Connecticut.

If you are on the fence about enrolling your child in karate, take advantage of the free initial consultation they offer and get yourself down there today. Your child will learn so much more than simple self defense moves. They learn discipline and respect, two qualities that they will take with them for the rest of their lives.