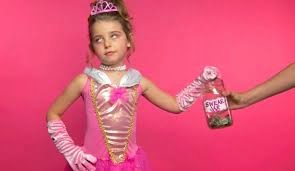 This time it's cute little six year-olds in tiaras and princess dresses dropping F-bombs with apparent glee.  It's all good though. It's for a good cause (or something like that).

The annoying screech of pre-adolescent voices might be enough to make the average person shudder all by itself, but throw in a few helpings of raunchy language, pepper it with some high decibel "facts" about misogyny in America, and you've got a video that is truly cringe-worthy.

I've been known to use some colorful language to get my own point across.  My children aren't saints when it comes to language, either (See Why My Children Sometimes Have Potty Mouths). In fact, I'm all for the use of hard-hitting words when it comes to expressing a passionate opinion. Sometimes strong "sentence intensifiers" are necessary.

It's not the language I find offensive. It's the blatant misinformation used for a specific, and a slightly underhanded purpose.

The 2 minute and 35 second video features all of modern feminism's favorite battle cries: "Pretty" is an insult. Women receive unequal pay. 1 in 5 women will be sexually assaulted. It paints an offensive picture of modern America, and makes it pretty easy for women to get their panties in a wad, be completely angry at oppressive men, and buy really snappy and sarcastic t-shirts.

But the facts aren't on these adorable, yet brash, youngsters' side. The unequal pay myth has been busted. And busted again. And busted again. And so has the 1 in 5 myth (Which in no way trivializes the subject of rape. Just puts a woman's risk of sexual assault in a more realistic perspective). As for being called pretty, I for one, don't mind the compliment.

What I find more offensive is the division videos like this perpetuate. Videos like this one stir up anger and resentment to an ethereal enemy that is impossible to fight. In the process, Feminism becomes an extreme, in-your-face, rebellious ideology, one that is willing to use half-truths and outright lies to perpetuate anger and societal discord. Is it any wonder women are rejecting the feminist label in droves? Most people aren't going to be swayed by children in pigtails cussing like sailors.

This video does nothing to provide real education or raise the level of debate about gender issues. It keeps mainstream thinkers from embracing ideology by keeping Feminism marginalized to the fringes generally occupied by radical nutjobs. It's just a shock video intended to gain publicity and stir emotions in order to sell swag to the masses.

It's okay, you can rock out your "This is What A Feminist Looks Like" t-shirt with self-righteous indignation.  Just please understand, while you may indeed look fabulous, you've done absolutely nothing to further your cause.

Feel free to watch the video below.  Warning: Language may not be appropriate for workplace viewing. And if there are young, impressionable girls present, I promise they will flock to the computer like moths to a flame.  They seem inappropriately drawn to images of girls in frilly dresses and tiaras... Probably due to society's misogynistic programming...