Once upon a time, the official colors of October were the deep russets and pure golds of dying leaves. But not anymore.  The warm and homey earth tones that used to herald the season of cooling weather have been almost completely pink-washed away.

October is Breast Cancer Awareness Month, and the official color of all things breast cancer is pink.

But seriously... if you aren't "aware" of breast cancer, you must be hiding under a pretty darned nice rock. Everything from the National Football League to Ace Hardware to the legendary rock and roll band, Chicago are sporting pink ribbons in support of raising awareness (and raising funds) to fight breast cancer. 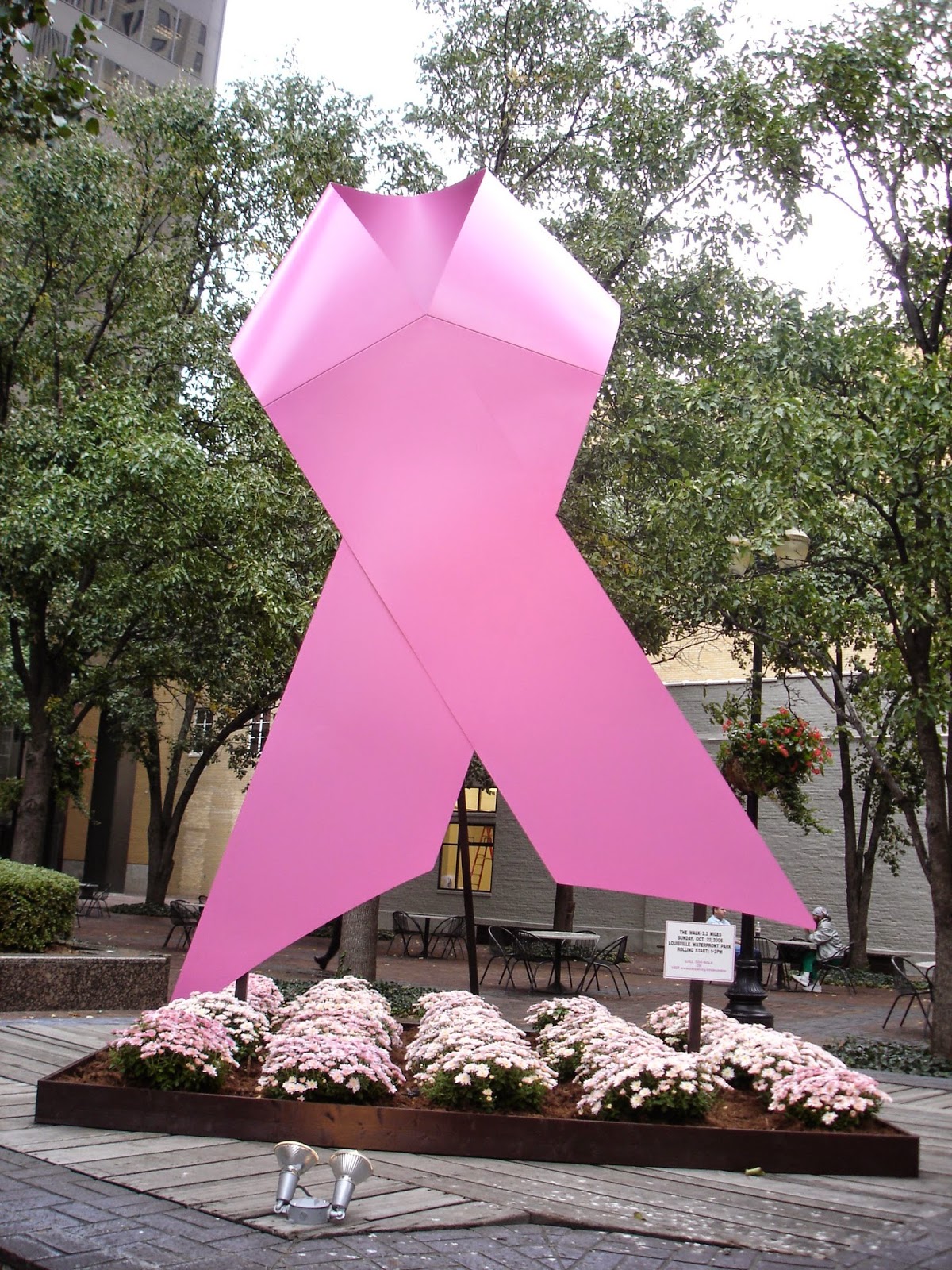 You can't turn around without seeing another pink-ribbon festooned product to buy (proceeds to support breast cancer research) or make it through the check-out line at your local retailer without being asked to donate funds.

But other than pimping pink products for money and pushing for annual mammograms, I'm not hearing an awful lot of useful information.  Sure early detection is important, but I'm more than a bit skeptical about the popular breast cancer mantra, "The Best Protection Is Early Detection".

While this makes a wonderfully catchy cheerleading chant for events like Relay for Life or Race for the Cure, it doesn't make a lot of sense. Detecting cancer in the body, even at the earliest stages of development, means the body's protection systems have somehow failed. Catching cancer early helps the cancer patient's prognosis, but PREVENTION would actually help keep the cancer patient from having her world turned completely upside down in the first place.

Breastfeeding has been shown to lower the risk of developing both estrogen receptor-positive and estrogen receptor-negative breast cancers. And amazingly, the longer a woman breastfeeds her children, the greater her protection. According to the American Academy of Pediatrics:


While I don't particularly like the language the AAP uses in reporting it's findings (Breastfeeding is the norm for our species. Why are they not saying that by choosing NOT to breastfeed the chances of developing breast cancer are greatly INCREASED?), that's an incredibly significant risk reduction.  It's almost like Mother Nature said, "Use 'em or lose 'em, ladies!"

Yet recently I stopped at an American Cancer Society informational booth (all adorned with pink ribbon flamboyance) at a local outdoor festival and flipped through some of their free brochures, full to the brim with information about the importance of early detection plus a stern recommendation to not neglect our yearly boob-squishing mammogram rituals.

Nothing about breastfeeding. Not even one tiny little mention. When I asked one of the young, bright-eyed booth volunteers in her pink couture why there wasn't a single mention of the incredible risk reduction associated with extended breastfeeding, I got a blank stare and crickets chirping. She finally admitted that she had never heard the statistics relating to breastfeeding and breast cancer.  Ever. Yet she was all for peddling mammograms? I suggested she look them up if she really wanted to be helpful to the general public, if she was really dedicated to wiping out the disease.

And that's the real problem I have with the Paint-It-Pink month of October. There is little real, useful information circulating out there about actually preventing the disease.  Instead, the Almighty mammogram is heralded as the greatest tool we have in the war against breast cancer, even though there is an ongoing debate among experts concerning the actual benefits of mammogram screening. If anything breast cancer has become over-diagnosed, needlessly subjecting women to the emotional roller coaster that is the mere mention of a possible cancer diagnosis.

It all comes down to fear.  Fear is a great marketing tool.  The fear of breast cancer may be a legitimate fear (It is estimated that one out of every eight women will develop invasive breast cancer in her lifetime), but fear can be manipulated, marketed, and sold in little pink packages.

Like Todd Tuttle, oncologist and surgeon from the University of Minnesota said:


"There is so much ‘awareness’ about breast cancer in the U.S. I’ve called it breast-cancer overawareness. It’s everywhere. There are pink garbage trucks. Women are petrified."

All that is being accomplished with the overabundance of pink paraphernalia and races for the cure is the spread of fear among women.  We are now hyper aware that some faceless enemy could swoop in at any moment to steal our boobs if we're lucky and our lives if we aren't.  So we buy things that are pink and we hand over our money to what is really consumerism disguised as philanthropy.

But we accomplish very little... unless you count the smug feelings of moral superiority and self-righteousness, because very, very few of those pink-washed dollars go to actual cancer research. Most of the funds go to executive salaries and even more fundraising campaigns.

Needless to say, I won't be flashing any pink ribbon merchandise or donating to any feel-good cancer charities this October. But I do intend to do something to possibly help slow the threat of breast cancer. I'm donating some of my hard-earned cash to La Leche League of North Carolina.  La Leche League is an organization that helps mothers successfully breastfeed their babies through mother-to-mother support, encouragement, information, and education. Breastfeeding may be a natural act, but it doesn't always come naturally to every mother. That's where support is crucial. Every month a mother breastfeeds her baby, she's a little bit safer from breast cancer.

You make some excellent observations and points.

I tried posting earlier but something happened...

I exclusively breastfed my son for 14 months and ended up with ER+ HER2+ DCIS Invasive ductal carcinoma. At the age of 30. And because of all the donations made available to researchers, my type of breast cancer has a 95% curative rate. I had an infusion every three weeks for a year of a drug that was only in clinical trials 20 years ago. It has kept HER2+ breast cancer away for 10+ years. I received an experimental drug created at Harvard. It was flown from the Mayo clinic in the morning on the day of my treatements. Without all the funding put into research, my type of breast cancer wouldn't have such a good prognosis. I hope that you or anyone you love is never affected by breast cancer, but with 1 in 8 women developing it t some point in their lives, chances are you will. And I hope it opens your eyes to where the money goes. Oh also, I felt one lump. By the time I went for my biopsy, they found 4. Without mammograms those other three wouldn't have been found because I couldn't feel them. Breast cancer isn't just going to show up in your breast, it can grow on your chest wall. A fellow breast cancer survivor went for her mammogram, there was a suspicious shadow on the back of the breast. An MRI revealed the mass had started on her chest wall and was growing in toward her breast and invading her chest wall. Mammograms do save lives!! So please stop spreading the notion that mammograms, early detection don't save lives, that the majority of money raised isn't provided to research and that breastfeeding will ultimately prevent you from developing breast cancer.

I'm truly sorry for your struggle and am happy to hear that you are now doing well.

While there is a focus in this essay on breastfeeding as a form of prevention, there are other areas too (exercise, pesticide exposure, hormones in cows' milk) that were mentioned. I never said that breastfeeding gave anyone a freedom from cancer pass. I'm just disturbed that the information about prevention isn't being made available during a cancer awareness month. Please don't confuse early detection with prevention. Those are two very different things. And the information is available as to how many dollars actually make it fund research (it is disgustingly little).

I stand by my assertion that "Breast Cancer Awareness" campaigns are little more than consumerism disguised as philanthropy.