The Raising of Voters and Decent Men

Yesterday, I walked with my 18 year-old son up to our county's Board of Elections office (Yes "walked"... sometimes there are perks to living in a small town aside from the rampant gossip and unsolicited advice about how to raise your children) where he filled out the required paperwork and became an official registered voter.

I'll admit that I'm pretty proud. This is kind of a momentous occasion for me.  It means that I have now successfully reared an adult who does his own laundry, is gainfully employed, and is a registered voter.  He still lives with his parents, but by most standards he would be classified as a responsible adult. I'm feeling like a fairly successful parent.

He noticed I was kind of beaming on the way back home. When I tried to explain how proud I was that he was so socially and politically engaged, so well-informed and culturally awake, he just shrugged insisting it was no big deal. 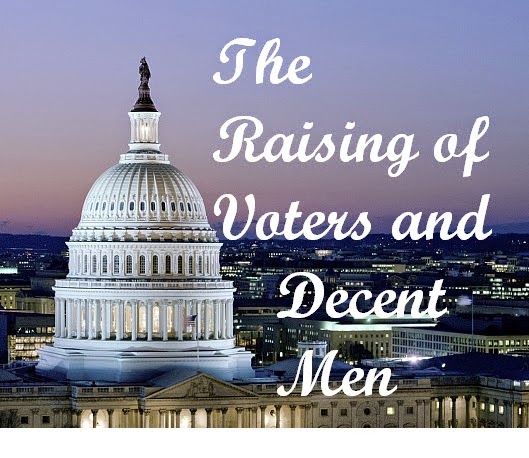 "Mom, if voting made any difference, they wouldn't let us do it."

I'm not sure if I'm more proud that he quoted Mark Twain or that he's so inherently cynical. (But seriously, with me for a mother, could he have turned out any differently?)

It might be true.  It often seems like one small vote doesn't make much difference. Candidates are largely chosen by the media and big contribution dollars from wealthy and politically powerful corporations. We find ourselves choosing constantly the lesser of two evils, which is still a vote for evil.  The system isn't so much broken as it is rigged.

Still, our vote is our only power, however small it might be. The ballot box is the microphone that allows our tiny individual voices to be heard.  It's the only real chance we have to make change.  Climate change marches, Occupy movements,  million man marches, petitions to deport Justin Bieber... they are all just senseless chatter.  The voting booth is where voices are really heard.

Yes, my son is skeptical and cynical.  And he is convinced that our government has already been bought and paid for, that our politicians are just dogs loyal to the corporate hands that feed them, constantly turning deaf ears to the voices of their constituents.

He realizes that trusting politicians is dangerous, that believing the post-election world will magically conform to their campaign promises is naive.

He understands that American foreign policy is based on the meddling and corrupt economic self-interests of a giant bullying war machine and that it has been for more than a hundred years.

He sees that his peers are complacent and easily distracted by shiny fads and flashy electronic toys and the crazy antics of celebrities, and he understands that is just how the government likes things.

He gets how easily manipulated the masses are by government propaganda and promises of safety and security, while completely missing the bigger more important picture of dying liberty and personal rights and the smothering weight of taxes, and taxes, and more taxes.

He loves his country and he hopes for something better.  So he will still vote even though he is embarrassed and disgusted by what his government has become.

H.L. Mencken, early 20th century journalist, once said, "Every decent man is ashamed of the government he lives under."

I can at least rest assured that I've raised a decent man.
Posted by Alice Jones Webb at 2:03 PM