I wrote last week about the super-cool and thoroughly impressive achievement of some European scientists who landed a robotic probe on a mind-blowingly distant comet. I was disgusted with humanity at the time because this incredible accomplishment was taking a major backseat to the mind-numbing non-news story of Kim Kardashian and her shiny naked body in Paper magazine. I was ready to toss in the towel and move off-grid so that I would never have to rub elbows with the sorry excuse for humanity that found more awe and value in a celebrity press stunt than a real and significant scientific achievement that was ten years and three hundred million miles in the making.

The creativity and innovation and utter brilliance of the scientists responsible for this historic feat are definitely not run-of-the-mill. These people aren't typical. They aren't average. Average people do not land robotic space probes on speeding space comets millions of miles from Earth. Not only does the typical person not have the brain power necessary to achieve that sort of space landing, the typical person also couldn't even conceive of the concept. The typical person is too busy conforming to social roles, trudging through traffic, working at boring and unfulfilling jobs in order pay off massive amounts of debt to accomplish the magnificent.

One look at the early pictures of Rosetta Project scientist Dr. Matt Taylor, a brilliant man with full sleeve tattoos and a bizarre sense of fashion is enough to make one realize this is not your everyday garden variety scientist. He's definitely a unique individual. He isn't normal or ordinary. If he were normal, he wouldn't be landing robots on comets... because, you know, people aren't doing that sort of thing everyday.

His unusual appearance is just confirmation of how uncommon he is. It's beautiful really. That media brainwashing and the vacuousness of pop culture hasn't transformed everyone into the mediocre masses of the uninspired is a wonderful thing. Dr. Matt Taylor is a freak who has escaped the box inside of which society seems to do all of its thinking.

Enter the mob army with pitchforks and torches and angry tweets ready to burn freaks at the stake of public opinion. #shirtstorm. A gang of terribly non-brilliant feminists formed out of the farthest reaches of the internet to rant and scream and accuse Dr. Taylor of objectifying women, claiming that his choice of admittedly gaudy attire was blatantly sexist (His shirt featured a colorful array of scantily clad cartoon women), and that his shirt would single handedly intimidate young girls from pursuing careers in science. The angry mob tore down his character and his career and overshadowed the genius of his achievements.

That's what he gets for being different.

I grew up on the Chesapeake Bay. We eat a lot of blue crabs there. They are tasty boogers. But they are stupid. And they are mean. When you stick crabs in a basket, sometimes one will attempt to crawl out and escape to safety, only just as he starts to get somewhere, the others will grab him and drag him back down to their level ensuring their collective demise.  It's like they chant together with their tiny crab voices, "Where do you think you are going? You can't do that? Get back down here with us where you belong!" 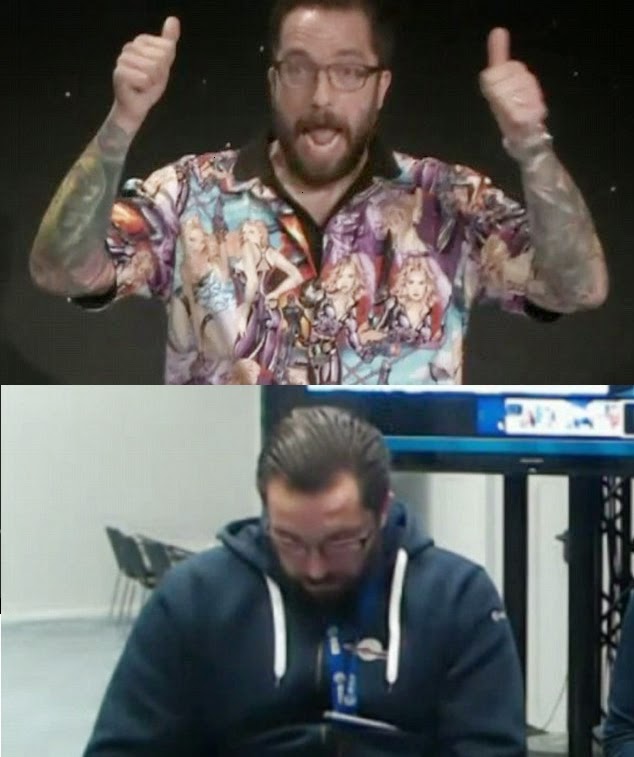 And that's what the feminist #shirtstorm did to Dr. Matt Taylor. With their sharp clawing tweets, they reached up and dragged him back down. "That's not socially acceptable! You get back in this box and do what you're supposed to do!"

The crabs succeeded. Dr. Taylor issued a tearful public apology, looking much more like a normal and respectable human being. His plentiful tattoos were covered. His colorful shirt replaced with a more sensible and neutral and unoffensive one. His exuberant happiness replaced with a more somber plea for forgiveness and acceptance.

Way to go, internet lynch mob! You broke him. You pulled him back down into the box of standard thinking and social convention.

You made him conform.

Still, no one is paying attention to the real wonder here. It isn't naked celebrity butts or inappropriately dressed scientists. The real wonder is that a group of humans maneuvered a tiny robotic vehicle through the vastness of space and landed it on a relatively tiny piece of rock millions of miles away, using only rockets and harpoons and the amazing power of math. Now that probe is transmitting back to our own tiny rock breathtaking images of a heavenly body we will never see with our own eyes. And none of that would have been possible if everyone conformed to socially acceptable patterns of thought and behavior.

But good for you, nasty internet bullies. You've broken another human being... probably ensuring our collective social demise. I don't really think one colorful shirt on one scientist's body would discourage girls everywhere from pursuing careers in the sciences. I do however, think that the savage social reaction to that same shirt might keep others from expressing themselves in non-conventional ways.

And we are all going to suffer for that.
Posted by ajoneswebb at 3:06 PM