We never "did" Santa with our kids. Instead of portraying myth as reality, we instead chose to accept the idea of Santa as an explicit rather than disguised symbol of generosity and compassion. Our children have always known that the presents wrapped in pretty packages and stacked under the tree sometime after they drifted off to sleep came from Mom and Dad and not a magical fat guy in a red suit. Some people have criticized our decision to not "do" Santa, saying that we robbed the children of the "magic of the holiday". Maybe. But my bed full of excited jumping kids plastered all over my Christmas memories tells me otherwise.

It must be tough keeping up the Santa facade. Lying to cover up lies. Concocting elaborate stories to answer honest questions from the inquiring minds of children. There have been other parents who became completely ticked off when my children accidentally tipped theirs off about the non-existence of Santa. Here I will officially apologize that my children exposed them in their lies. #sorrynotsorry.

Now there's this little guy to complicate the lies even further: 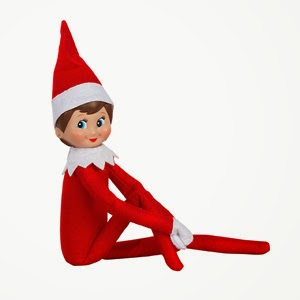 Elf on the Shelf. For the unfamiliar (Seriously, what rock have you been hiding under?), Elf on the Shelf is based on a self-published children's book of the same name. It's been all the rage with parents of small children for several years now. The $30 plush little "scout" elf  pops up after Thanksgiving Day to watch over kids and report back to Santa each night. They are Santa's informers, constantly keeping tabs on behavior. The children can't touch him or he loses his magic. He just sits there watching with his creepy doll's eyes. Parents must move him every night when their children aren't looking to maintain the front that their elf is actually real and visiting The Big Guy every night to discuss naughty/nice status, thus reinforcing the elf's constant vigilance.

The Elf on the Shelf phenomena has certainly added to the entertainment value of the season by filling up my Facebook news feed with pictures of him suggestively posed with Barbie and alcohol and other obvious mischief. (Makes me wonder how qualified the guy is for reporting on acceptable behavior. Elf on the Shelf is apparently quite corrupt and hypocritical... like government politicians). But what else has the cute, yet creepy little guy added to children's holiday memories?

Elf on the Shelf is supposed to add to the magic of the holiday, plus make a handy manipulative tool for managing young children's behavior. It's kind of an extension of the worst part of the Santa Claus myth, that he's always watching. "He sees you when you're sleeping. He knows when you're awake. He knows if you've been bad or good. Blah, blah, blah..." Basically, the Elf is a prop masquerading as a holiday tradition to be used in the psychological bullying parents happily wage on their young children. Which is totally in their best interests, of course.

But the road to surveillance (elf inspired or otherwise) is often paved with the best of intentions, national security being the most glaringly obvious. But I'm coming from a cynical adult place that is filled with Edward Snowden and Wikileaks and Anonymous and the NSA run amok. Although, perhaps it is best to desensitize them when they are young, to get them used to the loss of privacy. Constant supervision and control from the early years will normalize wiretapping and government spying so it will be less traumatic for them as they grow up and lose any sense of privacy.

What better way to prepare our children for life in a full-surveillance totalitarian society? ...In the name of security, of course.

Pay no attention to George Orwell.

Besides, if you aren't doing anything wrong, you shouldn't have anything to hide... From Santa or your neighbors or the government. Privacy is selfish and just a way to protect bad behavior. You can't be trusted to make good choices without the threat of exposure should you make a mistake.

You can't be good for goodness sake. Be good because the elves are watching you. 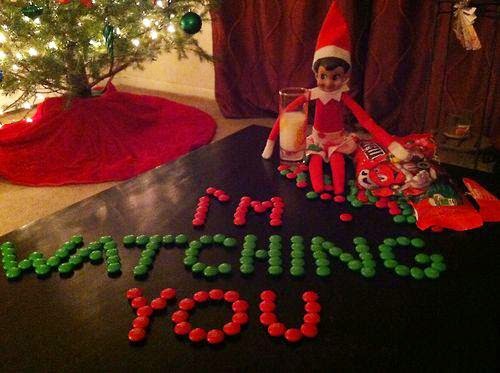 I think you are awesome for not doing "Santa"! We did it and it is way more work than necessary! Finally my older two (12 & 10) figured it out a month ago. I have no idea how I kept it going that long except for the fact we are nomadic and never got to know people well enough to learn there traditions. They found out because my friend's "Tooth Fairy" gives out $5 as opposed to our cheap tooth fairy that gives only $1. I was sad at first because they are growing up but REALLY EXCITED that I don't have to work as hard keeping up this ruse! Great post!! Happy Holidays!

We tried to keep our kids from being tattlers. "Unless someone is hurt, something is broken or there is danger, I don't want to hear it." The idea of putting a creepy little tattletale out to spy on kids is way beyond my comfort zone. And besides, what if he tattles on me? ;)