Not Bad For A Girl

It made me cringe from the top of my head down the tips of my blue-painted toenails. Words spoken by a father to his little girl about her belt promotion in karate. It wasn't meant to be mean. He was just kidding. It was their little inside joke. He couldn't be prouder, actually.

But he still said the words.

And she still heard them.

What kind of message does that send? That her performance would have been better if she were male? That girls don't have to live up to the same standards as their male peers? Maybe that she'll never be as good as the guys, so maybe she shouldn't try? That she is less capable of excellence because she's "just a girl"?

I don't know what that little girl heard in her daddy's words. Maybe it doesn't mean anything at all to her. Maybe it IS just an inside joke, and I'm totally over-reacting.

But maybe I'm not. 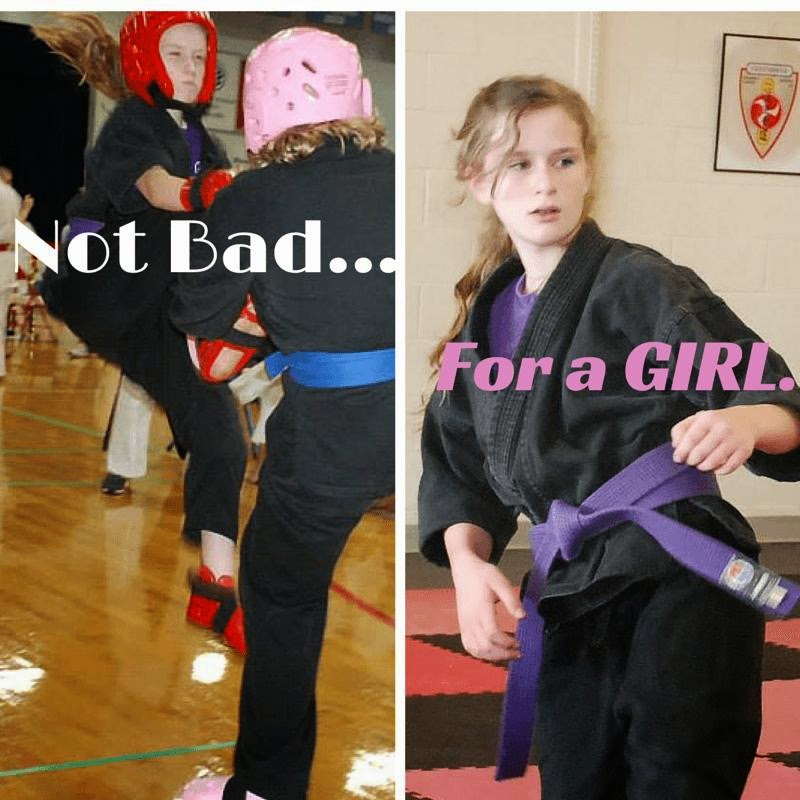 Being a girl in any male-dominated sport isn't easy. It's often incredibly difficult to be taken seriously. The guys tend to look at the girls as weaker, more fragile, and less aggressive, as having less potential just because of their gender. It leaves female participants constantly trying to gain respect, to prove themselves in a field where men hold the gold standard.

I hold a black belt in karate, and I've heard the whispers of doubt from male students about how much easier it was for me, that instructors aren't as rough with "the girls", that maybe I didn't pay the same price for my rank as the guys did. I've heard other students insult each other saying, "Come on! You hit like a GIRL!" As if it were the worst possible insult.  I've heard  bad jokes about "where a woman's place is, and it isn't in the dojo."

I've sparred guys who refused to hit me at all, because of my gender, and I've sparred guys who were insanely rough, who played their hardest in an attempt to win at all cost, or to push me to my limits and make me quit. I realize that the guys kind of have it tough, that they will be shamed for being "beaten by a girl" or shamed for beating one up. It's a lose/lose situation for the male ego and probably explains why many of them would like the ladies to just go away... or at least stick to training with the other girls (Although there aren't usually very many of them around... it is a male-dominated sport, after all).

It's all part of training and competing in those traditionally masculine sports. The girls are going to deal with disrespect and ridicule and rude comments. They are going to be underestimated and not taken seriously (which is often a competitive advantage, but still insulting). They might even have their sexuality questioned. It's all going to come out on the training floor... not every time, but eventually... and it's going to be an ugly emotional mess.

So, don't make it worse, Dad. You're supposed to be a source of encouragement and support, a safe place to land. Let her know that you believe in her, with ALL of your words. Because if she sticks with it, she's going to deal with enough shit out there on the mat. Let her know her efforts and her hard work are enough without the gender-based conditions you place on her ability.

And just for the record, I've seen my daughter completely own boys on the mat, boys much bigger and stronger than she is. She is tough and fast and confident. Maybe because she's never been told she's "just a girl"... at least not by her parents. She can seriously kick butt... which is pretty good by any standard.

Love you post. I just read your post on schools. I am a tutor. I tutor 1st grade in a group. I teach English reading. One day we were reading a book, the first chapter, only 5 pages long. He continued to read, more and more. I said, were not doing that part yet. He looked at me kind of scared. I told him....you're doing so good, please keep reading. He was so happy. No rules or right and wrong when I teach. They need to think and dream and have opinions of there own. Thank you for writing what you did.

I don't have daughters, but I'm sure someone saying that would annoy the H out of me if I did. I found you on Scary Mommy--great post over there, too!