My son was riding shot gun in the minivan. I was having a particularly rough parenting day. I felt annoyed and short-tempered and edgy and I really just wanted him to stop.

"Why?" he asked me mid-crunch.

"Because it's dangerous," I said. "You might pop something important. And it will cause problems later in life." I didn't really want to tell him he was annoying the snot out of me. This sounded better, plus I was pretty sure I was right.

As a kid, my father had been insistent that I shouldn't pop my knuckles. He would show me his swollen and twisted slightly-arthritic hands and swear it was from excessive knuckle-cracking in his youth. I never thought to question him. He was my dad, the ultimate authority figure. He had to know what he was talking about. Besides, crossing my dad was never a particularly good idea.

I looked over at him in stunned disbelief. I had a tense moment of "How dare you question my authority!" probably brought on by my frazzled patience.

"It is," he insisted, talking faster. "Cracking your knuckles is harmless. I read it on WebMD. It doesn't cause arthritis, even though some people think so. There's no evidence."

Just for emphasis, he popped another knuckle.

I was momentarily impressed that my teenage son was spending time on WebMD instead of just playing mind-numbing hours of video games, but the crackling noise was further fraying my already frayed nerves.

"Well please stop because it's annoying the heck out of me."

He popped off one more knuckle crack and then settled his hands into his lap.

When we got home, I looked it up. He was right. I was wrong.

But he had questioned my authority.

The general parenting consensus seems to be that we shouldn't allow children to question their parents' authority. Endless numbers of books, doctors,  and talk shows (as well as teachers, relatives, neighbors, and random strangers in line at the post office) tell us that we must be firm, set strict well-defined boundaries, and never EVER waiver on the rules. They insist that we demand constant respect and deference. The popular "Because I Said So" parenting insists that our parental authority never be questioned, that our demand for respect is the cornerstone to successful parenting.

Because we want to be good parents and because we want to raise good children, we lay down the law, and when the kids don't toe the line, we punish them. No one wants a smart-mouthed kid. We've all seen those in checkout lines and waiting rooms, spouting nastiness at their parents when they don't get their way. They make us cringe while we silently judge their parents. We don't want to be that parent. And we don't want our kid to be that kid. So we put them in time-out (or worse) for talking back. We become enraged when they defy us or argue or offer us anything but calm, compliant obedience.

Parents are hypocrites. We want them to question authority... just not our own. 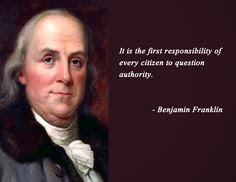 There are too many people blindly bleating along with the masses. The world needs more independent thinkers, more rebels, more skeptics, more people asking questions. Children raised with a fear of questioning those in authority will become adults with the same fear. Personally, I don't want my children to grow up to be easily controlled adults...and there will be lots of people who want to control them - abusive boyfriends, manipulative employers, lying politicians, media propaganda.

With more thinking and questioning members of society, there would be fewer dumb memes on Facebook full of obvious bunk. Wouldn't that be wonderful?

"Questioning authority is all fine and good in theory," parents are probably whispering to themselves rolling their eyes, "But I have to live with these rugrats."

It is a common misconception that unless children are forced to be unquestionably obedient and respectful then they will be rude, reckless brats ready to fly off the handle if they don't get their way.

That doesn't have to be the case. There are ways to foster critical questioning in young people without parents completely losing their sanity.

1. Pick Your Battles. The more rules a household has, the more rules there are for children to break. No one, adult or child, likes to exist under the oppression of endless regulations. Too many restrictions create resentment. Parents need to pick the things they find nonnegotiable and stick to those rules. Not everything has to be a struggle. As parents, sometimes we really do have to just stand our ground, but if the rules are limited to the things that are serious and undeniably important, then we should find that the children have an easier time respecting those rules.

2. Explain Yourself. Nobody likes to be told what to do arbitrarily, and nobody likes rules that just don't seem to make sense. "Because I said so," isn't usually a compelling reason to respect a rule. If the rules make sense, they are easier to follow. Even children have the right to know the reasons behind decisions that affect them.

For example, my son had a difficult time respecting some guidelines we had for washing the "good" dishes. We didn't want food scraped off with silverware. To him it didn't make sense. He figured as along as the food left the plates and ended up in the garbage, it shouldn't matter how it got there. When it was explained that the silverware would scuff the dishes over time and that we wanted the "good" dishes to remain the "good" dishes, he was much more willing to comply. Understanding the reasons for a rule is the first step in obedience.


Instead of demanding obedience, we can seize opportunities to teach. It is wrong to lie or steal or intentionally hurt another person, but we are failing our children if we only demand that they not lie or steal or hurt people.  Requiring such behaviors as a matter of compliance only succeeds in raising a child who is inept in the real world when it comes to making moral choices.

A child should be able to question WHY it is wrong to lie (or steal or otherwise intentionally hurt someone). As a parent, we need to be able to adequately and honestly answer that question. If our only answer is “because I said so” then we are raising morally stunted individuals who will grow up to believe it is okay to lie as long as they aren’t caught by the people in authority.

It’s true that this type of parenting can take a lot of time and energy, but in the end, it’s worth it.

3. Allow Them To Argue. Without tantrums or pouting or shouting, let them argue their point in a civil and acceptable way. If they don't agree with you, let them convince you. Let them argue an opinion. Let them present evidence. Let them offer a calm, fact-based support  of their position. Then listen to them. Like with the knuckle cracking incident, my son was able to argue his position, at least to a point. He presented facts from a (fairly) credible source. (However, he couldn't argue that the noise wasn't annoying. I don't think there's a Wikipedia entry for that, although he might be currently working on one.)

4. Admit When You Are Wrong. This one can be hard, but it's okay to change our minds,out loud, when our children make a good point. We might think that our children won't respect us when we admit that we are wrong, but any kid (at least any kid older than an irrational toddler) will more greatly respect our authority if they understand that it is based on evidence and reason.

5. Compromise When You Can. There doesn't have to be one winner in a disagreement. When there is no way to convince the other side, it's okay to compromise. Encourage your children to help find mutually agreeable solutions. It helps build their confidence and problem solving skills, while still respecting their own feelings and opinions as well as the feelings and opinions of their parents. Seeing each other as human beings who ultimately want the same things (safety, harmony, happiness) goes a long way in strengthening trust and mutual respect.

6. Check The Attitude. We want children who can argue their case rationally. If a child is just being snotty or whiny or verbally abusive, just don't listen to them. It's okay to remind them that communicating in anger, whatever the situation, is most often non-effective. They can learn that civil discourse breeds open minds. As parents, we don't have to take a nasty bratty attitude from our children, so don't reward nasty bratty behavior. Listen to their arguments when they can speak in a calm and levelheaded way. Then give them the same respect when you present your own points.

7. Sometimes They Just Have To Do What They Are Told. It's a fact of life. Sometimes children just aren't mature enough to make their own decisions or maybe there just isn't time to explain parental reasoning. For instance, the child running toward a busy highway has to be stopped. Right now! There isn't time for intellectual debate. Sometimes children can be unwilling passengers on emotional roller coasters (especially the hormone ride that is puberty). Sometimes a child may be too upset or otherwise emotional to listen to reason. So yes, there are times that parental authority trumps all, but it shouldn't be the default setting. "Because I said so" can still be in our parental tool box but should be brought out only for emergencies or extreme cases.

However, approaching parenting with logic and humility, by picking the important battles, and allowing mutually respectful discourse produces trust and respect that will still be there during the moments you must use that parental trump card. If the rules have made sense in the past, it's easier for children to assume that their parents have a good reason even when they might not be willing or able to explain themselves.

This sounds all well and good, but won't parenting be harder?

Yes. Yes, it will. But nobody said parenting was easy in the first place. If we wanted easy, we should have bypassed parenthood and taken up astrophysics or bomb disposal or deciphering hip hop lyrics. Listening to arguments and criticism from a child can be exhausting, but it's important to remember that the easy way isn't always the best way, especially when it comes to raising children.

And in some ways it's easier. With children who are confident and secure free thinkers, we as parents can rest a little easier knowing that they won't be so easily influenced by the whims of their peers or lured into hurtful controlling relationships.

They will be better people for it, too.

"It is the first responsibility of every citizen to question authority." ~Benjamin Franklin
Posted by ajoneswebb at 1:31 PM

Can't stop reading your article again and again! It's not a secret for anyone that answering and asking questions is an important part of learning. Through questions children start figuring out their world, why so many people don't understand this simple thing?! I've read somewhere that curious children ask 73 questions each day - many of which parents can't answer ;) I'd like to advise you reading this article http://www.agsinger.com/7-skills-of-responsible-parents-that-make-a-difference-for-the-child/. It helped me a lot in being a better parent.