Listening To My Mother

This year I have the honor and privilege to be participating in Raleigh-Durham's Listen To Your Mother show. Listen To Your Mother is the brain child of blogger Ann Imig. It started with one performance in Madison, Wisconsin and has grown to include shows in 39 cities across the United States this Mother's Day weekend. The performances feature local writers reading on stage their own stories about the many aching and humorous aspects of motherhood. It's a way of giving motherhood a voice.

So this Thursday and Friday I'll be sharing the stage with twelve other beautiful and talented women (seriously, sometimes I feel like the little country bumpkin who's made it to the big city). If you're in the area and haven't bought tickets yet, you should totally get on that. (Not only will the show move you in unexpected ways, you'll also have the rare opportunity to see me in a dress.)

One of the writers who will be reading at the Raleigh show has a rare small cell, very aggressive form of cancer. She's also the mother of two small children.

I won't tell her story, because it isn't mine to tell (another reason you should come to the show!), but it has made me think a lot about mine... especially as Mother's Day speeds up on us.

My mother is coming to the show. She's driving down from Virginia, meeting us in Tarboro, and then driving out to Raleigh where she will surely sit front and center. She might be my biggest fan. She's always been my biggest fan.

When I was two years-old, my sweet mother was diagnosed with uterine cancer. On my third birthday, my mother underwent surgery to have her "lady parts" removed. (See? The doctors DID break the mold after I was born!)

I don't remember much about my mother's cancer diagnosis or her treatment. When she was undergoing all of the stress and fear and confusion of her bout with cancer, I was still pretty preoccupied with eating dirt and trying not to wet my pants. Plus we haven't talked about it much, perhaps only in quiet whispers because maybe if it hears it's name, Cancer will think it might be welcome for another visit.

I do know that my father mentioned (again in those quiet whispers) that when my mother had her surgery the doctors were surprised at how fast her particular cancer had grown, how much it had eaten away, how it stole my chances of having any siblings. On the rare occasions he has spoken of it, his voice quivers slightly. My father's voice never quivers.

I also know how incredibly lucky I feel that my mother wasn't snatched away from me too soon. I can't imagine who I would be if I had been made to grow up without her. Perhaps I would have been just fine (children are incredibly adaptable)... but I wouldn't have been me. 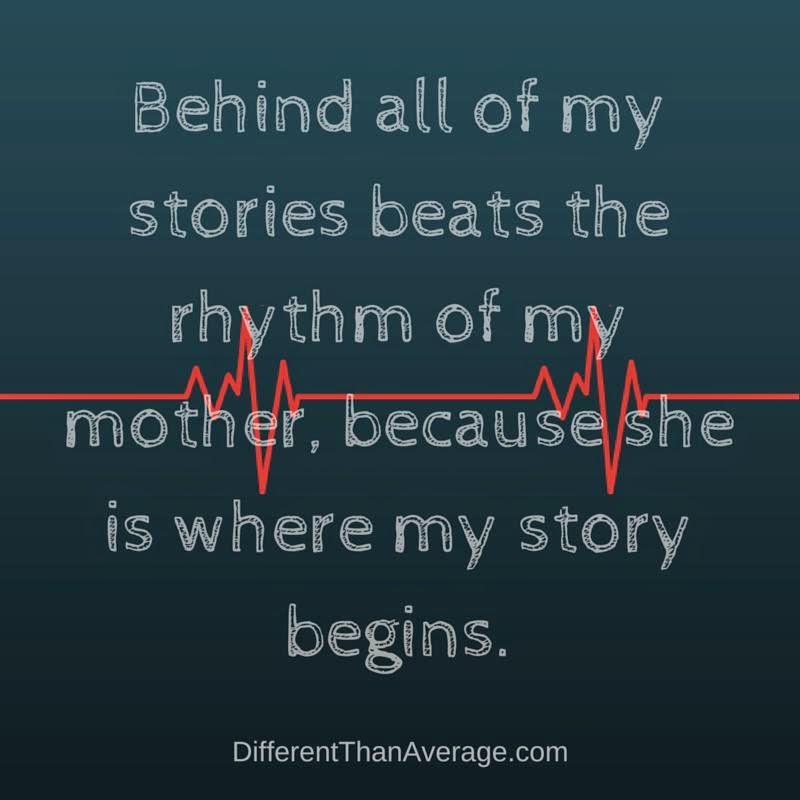 My mother, the person I so easily take for granted, is the person who has been the solid and constant foundation of my life, a quiet sturdy rock. The kind of calm reassurance that you tend to think has always been there and always will be. She's been my friend and my confidant, a source of advice (even when I haven't followed it), a cheerleader and supporter. If it weren't for her, who would have bought me my first bra? Who would have taught me to shave my legs? Who would have straightened my veil on my wedding day? Who would have spoiled my babies? Who would I have called late at night in tears when I thought my marriage was failing? Who would I have called when I made the cast of this year's Listen To Your Mother show?

How would I know how to make gravy or iron pants?

Who would I be?

Behind my story is my mother's story. The two are inextricably wound together. I am the person I am because I came from my mother... not only because she gave me life, but because she molded and shaped me with her words and her actions and her prayers. Behind all of my stories beats the rhythm of my mother, because she is where my story begins.

I know that I'm thankful that my mother will be sitting in that audience on Friday evening, maybe thankful in a way that I hadn't realized before. Sometimes it's hard to realize just how lucky you are until you imagine how life would have been if things had turned out differently.

So I'll look out into that audience, and I will be beam at my mother, even if only half as much as she beams at me. And when it's over, I'll hug her... maybe tighter than I have in a while.

I'm oh-so-very thankful that I have always had the opportunity to "listen to my mother".

My mother lived. For that I know that I am truly, beyond measure blessed. And it's why I pray for my fellow cast member and for her daughter...

But no matter what the outcome, she will always be a part of her daughter's story. Because our mothers are always part of who we are.
Posted by ajoneswebb at 10:59 AM

Sorry! I'm speechless and I can't type for the tears!!! I love you with all my heart, Alice. Through you and your daughter
s I will live forever!

This is perfect and I am sure your mother was honored. It is so hard to put in to words what the mother-daughter relationship means but you have captured it perfectly, so thank you. I was privileged to stand with you on stage.