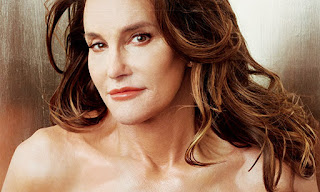 As much as I would like for you to just go away, it's apparent that you won't be fading away from the limelight any time soon. You've got a brand new reality television show that's being actively hyped beyond what it's worth. You keep landing interviews and awards, and you're constantly trending on social media.

In fact, the media in general keeps insisting that you're socially relevant... so it must be true. And since you seem to be here to stay (at least for a little longer than the average sideshow flash-in-the-pan) I guess it's time we have a little heart-to-heart chat.  You know? Woman to "woman".

I know that you're brave. You're courageous. You even have that shiny new ESPY to prove it. Walking across a nationally televised stage in six-inch heels must take an awful lot of courage. I certainly don't have the balls to do it. (That's called sarcastic irony, people. Please hold your scathing emails.) You even admitted in your acceptance speech that you'd never felt more pressured in your life (and you've known the pressure of representing your country in international competition, so that's saying something).

"Picking out this outfit - okay girls, I get it! You got to get the shoes, the hair, the makeup, the whole process."

You're right. It is quite a frightening process. And most of us have to figure it out without famous fashion designers and professional make-up artists at our disposal. Still... most of us fumbled our own way through the process by high school prom. (Although photographic evidence from the eighties suggest some of us never really found success.)

But there's much more to bravery than simply matching your dress to your shoes or finding the right shade of eye shadow.

I don't think you actually "get it" at all. To be fair, it's not entirely your fault. You haven't lived your whole life as a woman. You haven't traveled through the world in fashionable yet uncomfortable women's shoes, and you haven't been shaped by all that entails.

You were never told you throw like a girl and known it was meant to degrade you. Bravery is playing ball anyway.

You've never dealt with the onset of your period in 8th grade gym class, a red stain spreading brightly across your white shorts. You never had to ask to be excused in the middle of class to go to the bathroom and had the male teacher question your motives. You never had to walk out of that class as every classmate watched your retreating form, hearing the snickers of all the boys who saw that red stain on your backside. Bravery is walking back into that class and enduring two years of snide comments and name calling because of that one embarrassing gym incident.

You've never dealt with boys' braggadocious detailing of their sexual encounters which labeled you a slut but gained them high fives and pats on the back. Bravery is opening yourself up to intimacy again anyway.

You've never woken up after a raucous night terrified that you'd forgotten to take your birth control pills. You've never had to wonder how you would cope with a positive result on a pregnancy test. Bravery is facing life for the next few uncertain weeks anyway.

You've never suffered through a business meeting where men talked to your cleavage and didn't take you seriously because you're "just a woman". Bravery is succeeding anyway.

You will never have to fear being too weak to ward off a rapist. Bravery is learning to defend yourself and walking dark streets confidently anyway.

You'll never feel as cherished as a woman feels when a man engulfs her small hands with his larger ones as he gently helps her out of his car.

Remember what you told Diane Sawyer, back when you were still Bruce? You said, "My brain is much more female than it is male."

You don't get to define us, Caitlyn. You're too new to the game. Besides men have been defining us for far too many centuries (and it wasn't all that long ago that you considered yourself one). You don't get the privilege of deciding how a woman's brain thinks and feels... or at least how you think it should.  Because how could you possibly know how a woman's brain thinks and feels without the composite experience of being a woman for your entire life?

How dare you try to wrap what defines a woman into a tidy little pink-hued box? How dare you?

As a woman, I'm more than a little offended at your blatant disregard for the fact that being a woman is more than feeling emotional and wearing heels and dresses and makeup. It's more than being sensitive and nurturing or feeling decidedly feminine. That's not what makes someone a woman any more than being a man is the sum of playing sports, getting dirty, or feeling aggressive (In which case... I'd probably be considered a man. Wonder if I could get an ESPY....).

If gender is nothing more than a social construct (like so many liberal psychologists would have us believe), then gender isn't something we experience separately within ourselves anyway. Instead, it is developed in coordination with our fellow citizens. In basic terms, our gender is largely formed by how we are treated by other people, by our experiences functioning within society. It is the byproduct of countless choices made over time. Being a woman is a collection of certain experiences, of certain indignities endured and courtesies enjoyed. Some are based on our biology and some on how society views us and treats us. What makes a woman is a jigsaw puzzle of varied pieces.

So Caitlyn, since brains are shaped by experiences (just like studies of London cab drivers show) and gender is a construct developed by societal experiences, your brain can't possibly be female, because you've experienced most of your life as a man. You've been largely shaped by a male identity. You've lived male experiences and been shaped by the treatment of a society that has viewed you as a man for most of your life (and still does to a large extent)... for better or for worse. No amount of reconstructive surgery or fancy dresses and high end makeup can change that.

I don't know where you fit into things. It's a pretty crappy spot you seem to be in. But stop pretending you know what it feels like to be a woman. You don't. And while you're at it stop trying to define what it is to be a woman. That's just too freakin' complex to even begin to try and define.

There isn't a box that we can all fit in, so stop trying to stuff me in one. But if we do for some strange reason end up in the same stupid box... just so you know... I'm man enough to hip-toss your girly butt out of it.

Kay? Thanks,
~Alice
Posted by ajoneswebb at 3:02 PM

okay I literally love you. The last paragraph made me laugh way too hard.
xo- MM