Cecil the Lion is a celebrity.

How did an African lion become an American celebrity?

If you aren't familiar with Cecil the Lion, let me give you a little backstory in easy-to-understand bullet points. 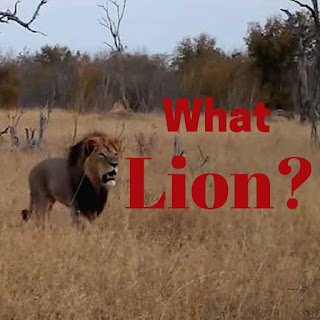 Please don't think I am defending Walter Palmer. Even as a hunter myself, I don't understand what motivates a person to fork up money equal to the annual income of some small American families for the "privilege" to shoot an exotic animal, especially when the animal is contained or lured into close proximity with bait. Not very sporting. Seems a lot more like "killing" than "hunting" (and yes, I think there is a difference). Even if it's legal, I don't think it's ethical. Even if the meat is donated to hungry villagers. Even if the large sums of money are used to boost struggling local economies and conservation efforts. I still don't get it. Can't justify it morally. Cannot wrap my brain around the mindset.

However, I am equally flummoxed at the mindset of people who wish and even graphically threaten death to a person's family for engaging in an (apparently legal) activity just because they don't agree with it. At what point does brutality justify brutality?


Truly. I'd put a cross bow bolt through Walter Palmer then track him from 40 hrs, shoot him, behead him, skin him and sleep peacefully.
— hardeep singh kohli (@misterhsk) July 28, 2015


Celebrities have pulled out their virtual torches and pitchforks and joined forces in mob-like fashion to paint Palmer as a soulless sadist. Piers Morgan said he wanted to "hunt fat, greedy, selfish, murderous businessmen like Dr. Palmer" and then "skin him alive" and "cut his head from his neck". (Interestingly enough, Doctor Palmer is neither fat nor a businessman... but it's all cool when you're trying to stereotype someone as evil). Sharon Osbourne called Palmer 'Satan' (Wait... is Satan a fat businessman?... because maybe this is just a case of mistaken identity). Jimmy Kimmel even teared up for poor Cecil as he pondered Palmer's ability to maintain an erection.

Then there are the plain ol' regular Joes who are calling for the dentist's slow painful death all across every social media platform known to Western civilization. There is a rushing wave of anger and disgust flowing like an out-of-control tsunami all across the internet.

It's like some sort of colossal global witch hunt.

Except it really isn't.

Certainly we would expect all of Zimbabwe to be up in arms, crying big fat tears of despair over the loss of what the media would have us believe is a national symbol. Right?

That was the response of Zimbabwe's acting Information Minister, Prisca Mupfumira when asked about Cecil's death.

"Are you saying that all of this noise is about a dead lion? Lions are killed all the time in this country," commented another Zimbabwean citizen.

"It's so cruel, but I don't understand the whole fuss. There are so many pressing issues in Zimbabwe. We have water shortages, no electricity, no jobs. Yet people are making noise about a lion?" said another Harare resident.

It's arrogance really, that we westerners would be so inflamed by the death of a lion, even a lion whose death was bought for a huge sum of money. It is our own privilege and arrogance that has driven the death of a lion on the other side of the globe to become the epitome of a First World Problem.

We have the luxury of being so self-righteously sickened and offended because we are all well-fed and healthy, because we live in comfortable houses and enjoy clean water. We wear new clothes and drive cars and are gainfully employed. We sit in air-conditioned dwellings and watch celebrities grieve for dead lions on our television shows while we munch on calorie-laden junk food. Cecil's death is an outrage to us because we are comfortable.

Do you know why Zimbabweans sell the deaths of their animals to the highest bidders? Because they have far more pressing concerns. Some sources claim Zimbabwe's unemployment rate could be as high as 80% (Some sources claim it is much lower, however, because Zimbabwe claims that subsistence farming is "employment"). Water, sanitation, and hygiene are major areas of concern, especially in rural areas where open defecation is common practice. Even in urban areas, water services have deteriorated recently causing a major outbreak of cholera. Access to health care is a major concern for Zimbabweans.

Try to imagine the average citizen of Zimbabwe, stricken with cholera and poverty and famine, witnessing us furiously typing away our collective ire over a wealthy dentist forking out money in amounts they can't even imagine for the opportunity to shoot a lion.  Honestly, he'd probably puke on your keyboard in disgust.

When you are concerned for the health of your sick child, and how you are going to provide your family's next meal... a lion's death, even one with a name, must seem like such a silly concern.

At least we care about lions with names killed by rich white dentists.

Just stop it with all of the self-righteous blather. Stop it with the internet outrage and the violent threats made from that safe place behind your keyboard. It's time to move on to the next stupid thing to be upset about while the real problems of the world get swept quietly under the carpet.

Update: Since I started writing this, Zimbabwe has called for Dr. Palmer to be extradited. Probably not because they want to lock him away in a Zimbabwean prison... maybe because they need more trained doctors.
Posted by ajoneswebb at 10:52 AM