Trigger Warnings Are Dumbing Us Down 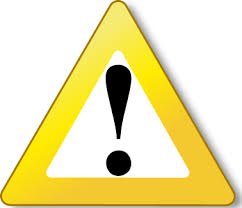 Trigger Warning: This blog post may contain one or more of the following potentially offensive or upsetting subjects, which could in turn cause weak-minded overly-sensitive readers to overreact, send me nasty emails, or otherwise rant about the unfairness of life. While I realize that trigger warnings are unnecessary like 100% of the time, consider this my attempt at being more politically correct. I'm doing this for you, you radical social justice warriors out there roaming the internet looking for random blog posts to be offended by. Thank you for forcing me to cater to people who can't take a joke, don't understand sarcasm, or just generally want to stifle opinions and worldviews that don't perfectly coincide with their own.

Thousands of college students are headed back to campus this week. While college campuses have long been bastions of political correctness, this semester some colleges are bringing their correctness to new levels. Some universities are adding trigger warnings to their course materials.

While college isn't exactly the real world, it also isn't exactly a feminist, social justice blog (the places where trigger warnings are rampant displays of enlightened liberal thinking and social sensitivity, with a dash of holier-than-thou attitude). It isn't meant to be a place that conforms to the student, that conspires to protect their comfort levels and meet them right where they are. That isn't education. It's more akin to babysitting. Colleges aren't meant to be intellectual or emotional "safe zones".

College is supposed to be the place where young adults jump in the deep end of the pool of academics, where they spend four (or more) years immersed in art and literature and philosophy and science. A place where they explore new ideas, have their beliefs challenged, and their knowledge expanded. It is supposed to be a place where students are stretched, sometimes frustrated and possibly even deeply moved, where their worlds are expanded and their boundaries pushed.

I'm not suggesting that individual students not be given easy access to mental health care. I also acknowledge that for some survivors of violence, reading or discussing certain graphic topics could potentially be disturbing. But these generalized trigger warnings aren't really about helping those suffering from PTSD. Even the most basic principles of psychology insist that it is misguided to help those with anxiety disorders avoid the things they fear. In fact exposure therapy is one type of cognitive therapy suggested for soldiers suffering from PTSD by the Department of Veterans Affairs . While the college classroom shouldn't be a therapy session, sanitizing life from anything potentially distressing or controversial isn't exactly reasonable or helpful.

If we insulate young people from discussions of uncomfortable topics, how will they grow? How will we make progress as a civilization? How will we find solutions to the big problems? We can't pretend that these things are so distressing that they can't be discussed. The topics that make us all uncomfortable are the very things that we should be talking about. There are far more important things to discuss than the weather (that one didn't make it onto the rigger warning list. How very insensitive to survivors of natural disaster.)

A campus culture that polices the speech of it's students and faculty, that slaps warning labels on classic works of literature, and treats words as potential forms of violence is not one conducive to learning. One of the basic tenets of education is "Don't teach them what to think. Teach them how to think." But trigger warnings not only censor content, they also place a preconceived level of disgust for the topic at hand. They already place a value judgement without letting the student come to their own conclusions. When students already start out being told what to think, how can they learn how to think for themselves?

While lovers of trigger warnings might simply be attempting to protect young women and other traditionally marginalized groups (LGBT, people of color, the mentally ill, etc.) from the damaging effects of the mind set and the abuse of power the white male heterosexual oligarchy has inflicted on others throughout history, those trigger warnings are actually doing far more harm than good. The warnings tend to be directed at those very same marginalized groups (women, LGBT, people of color, the mentally ill) and contribute to the general perception that those groups are weak, overly sensitive, and worthy of marginalization.

By trying to heal hurts of the past, they are in large ways just making bad situations worse. Women are strong. Minorities of all sorts are strong. Largely because of the injustices they've suffered. For that very reason, the topics of those injustices should not be swept behind insane trigger warnings where nobody can touch them without lacing up their kid gloves.

We shouldn't be avoiding the topics of racism, sexism, rape culture, violence, war, etc... Sure those topics are disturbing. That's all the more reason we should open the floor for discussion.

But here is a trigger warning some of you probably need: Not everyone is going to agree with you.

I know that might be traumatic. But that's life. And sometimes life isn't pretty.