Cheers! Here's to the CDC Stirring Up Your Conscience

Sometimes I am ashamed of my gender.

Not because of cultural stereotypes or men staring at my boobs. No... sometimes women are stupid (at least large portions of them). And sometimes those stupid women are pretty loud when it comes to shouting nonsensical outrage.

This week the Centers for Disease Control and Prevention issued a recommendation concerning alcohol consumption and pregnancy.  The CDC advised women who may plan to get pregnant, or who might accidentally get pregnant, about the dangers of alcohol for unborn babies. The CDC contends that there is no known safe level of alcohol use during pregnancy (safe levels aren't "known" because of ethics surrounding experiments on pregnant women). The CDC also discovered that 1 in 10 pregnant women and 1 in 4 women who would like to get pregnant admit to still consuming alcohol. Alcohol use during pregnancy has been linked to miscarriage, Fetal Alcohol Syndrome (a disturbing and permanently disabling condition), and other developmental delays.

But women seemed to hear something else entirely, and created a shitstorm on Facebook accusing the government of trying to control their bodies.

"You should be ashamed of yourself for publishing this fear-mongering, women-bashing article."

"Yes, let's mandate that women show proof of birth control use with their ID when purchasing alcohol or before being admitted to a bar."

"That is horrifically sexist. Let's not trust women to know whether or not they are having safe sex and whether they plan to carry a pregnancy to term."

"I feel like this is just a move to control women."


Even "news" sources jumped on the CDC-hating bandwagon.  Alexandra Petri headlined her piece for the Washington Post "The CDC's Incredibly Condescending Warning to Young Women". She apparently attempted to match condescension with condescension by asking, "Does the Centers for Disease Control and Prevention know how pregnancy works?" And the Atlantic ran a piece titled, "Protect Your Womb From the Devil Drink". 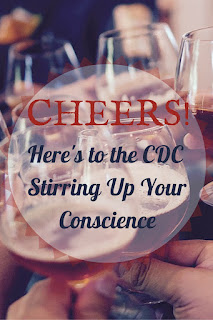 Relax, Ladies (term loosely applied). The CDC is not involved in some government conspiracy to control women's bodies. You still get to make choices (no matter how poor those choices may be). You can still binge-drink to your heart's desire and then sleep with whomever you want. No one is trying to pry martinis out of your cold, childbearing-age hands.

You see, the CDC has no regulatory power. It's not trying to control you. All it can do is issue advice. It can present information and make recommendations. That's it. The CDC is not going to issue any breathalyzer tests on young women exiting bars (That sort of thing is reserved for local police departments attempting to crack down on drunk driving. What an attack on bodily autonomy!).

I don't really think you ladies are upset with the CDC at all. I think you are upset that their recommendations reminded you that your actions have consequences. Sometimes really nasty consequences. A baby born with Fetal Alcohol Spectrum Disorder is more likely to be born small, to develop problems of the heart, kidneys, and brain. Damage to the brain can result in lower IQ and learning disabilities, attention problems, hyperactivity, poor reasoning and judgement, as well as hindered ability to communicate in social situations. And all of these problems can lead to mental illness, substance abuse, and a whole host of other lifelong problems. LIFELONG problems. Those problems don't go away. Quite a price to pay for a raucous night of partying.

The CDC isn't fear-mongering. It isn't woman-bashing. It's giving you facts. If you drink when you are pregnant, your child might suffer irreversible damage, and sometimes women don't realize they are pregnant until weeks into the pregnancy. If you think you might want to carry a child to term (even if you don't choose to raise the child) that kid is going to have to struggle through some really nasty stuff.

But you can still do what you want. That's a pretty healthy dose of freedom there, that even though your actions can be destructive... you can still choose to do them. Unfortunately, with freedom comes responsibility. That nasty hate-filled feeling you want to direct at the cold-hearted woman-hating CDC? That's your conscience bubbling up. Because you don't want information that questions sometimes selfish motives. You would rather the CDC kept quiet (perhaps causing thousands of children to suffer their entire lives) just so you can have freedom without responsibility. You don't want to feel guilty.

You can drink to that if you want to. Bottoms up.