Being a mother is hard. It zaps our energy, our time, and our emotional strength. It's easy to feel uninspired when it comes to taking care of ourselves. Sometimes we need the motivation of other women to hit the gym and eat healthy. So, I appreciate Elle magazine for trying to fill the gaps of motherhood inspiration. The magazine has been "asking influential women in a variety of industries to share a typical day of eats and fitness, to see just how they balance a healthy lifestyle with their jam-packed schedules."

While I would like to give kudos to Elle for trying, they just totally missed the mark with their latest feature, Amanda Chantal Bacon, founder and owner of Moon Juice. At first it seemed promising... because BACON. But I was not only utterly disappointed that not even once does Amanda Chantal Bacon mention eating bacon (What a waste of a super-cool last name. If my last name was Bacon I take that as free license to eat as much as humanly possible. It would be like my civic duty, right?), I was also completely confused and more than a little irritated with her ridiculous and unrealistic lifestyle.

Now I've been known to be a tad on the crunchy hippie granola side (especially during my weird kombucha phase). But Amanda is so out of touch with the reality of what the rest of us face each day, that she comes off as a total loon.

For example, Ms. Bacon claims to wake up at 6:30 every morning (thirty minutes before her 3 year-old son) to start the day with some kundalini meditation and a 23 minute breathing set along with a copper cup of silver needle and calendula.

I think I'm suffering from whiplash I just rolled my eyes so hard. First of all, what normal mother wakes a half hour early to do anything other than change the urine-soaked sheets that arrived courtesy of the toddler that snuck undetected into your bed? Do you know what kind of early-morning meditation mothers enjoy? It's called sleep, something they undoubtedly aren't getting enough of. Do you know what kind of 23 minute breathing exercises they enjoy. Snoring! That's what.

And a copper cup? What's that about? Sipping something exotic from an exotic copper vessel is just too much. I feel like a queen if I get to sip my coffee before it gets cold. It's usually drunk room temperature from a chipped ceramic mug that says "Mommy".

Amanda attempts to bond with moms by referencing drinking warm beverages on the way to school drop-off. I admit that at this point I was almost hopeful that Amanda was a real person and not some weird alien being from Los Angeles... but I was too hopeful too soon. Amanda isn't grabbing something caffeinated from the Dunkin Donuts drive-thru like mere humans do. No, she's drinking a warm chi drink that contains "25 grams of protein thanks to vanilla mushroom protein and stone-ground almond butter." Her morning beverage also contains "Brain dust, cordyceps, reishi, maca, shilajit resin, ho shou wu, and pearl", which pretty much cements my theory that she is, in fact, an alien. 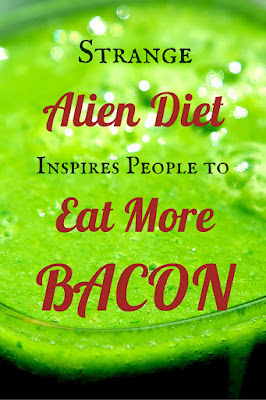 At 9:30 the alien must feed again. This time it's "16 ounces of strong green juice" (More evidence for the alien theory) plus 3 tablespoons of bee pollen which she refers to as a "candy-like treat" (You really aren't helping with this alien thing, Amanda!) and a handful of "activated cashews".and a "shot of pressed turmeric root".

At 9:30 I'm lucky to be polishing off the last of the stale goldfish crackers my kids left on the kitchen table yesterday afternoon. Satisfying, yet it leaves me wondering: ... How exactly do you "activate" a cashew? Is there a switch or something that I've been missing?

For lunch Amanda had "zucchini ribbons with basil, pine nuts, and sun-cured olives with lemon." It's apparently "easy, elegant, and light". I generally shoot for easy, and I assure you, Amanda there is nothing easy about this dish. Then again, I don't have people to prepare lunch for me. But Amanda gives me another alternative, she usually rotates between zucchini and "a nori roll with umeboshi paste, avocado, cultured sea vegetables, and pea sprouts". Oh yeah... that's totally more do-able. I think I might have half an avocado and some leftover sushi somewhere in the back of the fridge. That's basically the same thing, right?

For an afternoon snack, Amanda reaches for coconut yogurt with cardamom, dried figs, walnuts, and apricots from a weekend farm visit - and a hunk of dark chocolate". Amanda makes big batches of coconut yogurt and raw chocolate spiked with maca. She claims it's "easy to do". Honestly, I don't know how she squeezes it in around those weekend farm visits. You know what else makes for easy snack food, Amanda? Boxed brownies! Super easy. And if I'm feeling all kinds of crazy, I'll throw in a handful of walnuts just to stir things up. But the only thing I like spiking my chocolate is vodka (And it rhymes with "maca"... at least it does after a couple of chocolate martinis.)

Amanda then enjoyed an early pre-yoga dinner at Shima in Abbot Kinney, which is her 3 year-old's favorite restaurant. But that's only because he's never had a chicken nugget. Just one bite, and he'll refuse to eat anything else until he turns 15.

From 7-9, Amanda squeezes in two hours of kundalini yoga class with her favorite go-to instructor Harijiwan. Sometimes, on a really good day, I can just manage to run through the doors of the local gym five minutes late for the generic yoga class. I think the teacher's name is Patsy. Sometimes I fall asleep during the final savasana. Once I jolted myself awake because I was snoring. (Don't judge me.) Maybe it's because there is major lack of micro cilantro and daikon in my daily routine. But typically my fitness routine involves folding laundry and cleaning up the trail of shoes my children leave in their wake. I realize that's more cardio than the average alien life-form can actually handle, though.

At bedtime, Amanda and her son make a batch of almond milk and chia pudding for the next morning. Oooo... sounds like loads of fun. Sometimes they drink it before it's totally done, "when it's more like chia milk". Wow, Amanda... Livin' la vida loca. Sometimes at bedtime, I eat Breyers ice cream right out of the carton with the freezer door wide open, but only after the children have gone to bed.

At 11, Amanda has a nightcap of heart tonic and raw chocolate made from heirloom raw cacao, reishi and chaga mushrooms, sprouted brown rice protein, and coconut oil. She claims that she loves chocolate and doesn't want to deny herself the indulgence. I have news for you, Amanda. That's not chocolate, and you aren't indulging. Have you ever scarfed an entire giant size Hershey bar? That's chocolate.

Basically, this article convinced me that Los Angeles might as well be another planet and that the people there are not normal human beings. Unlike humans, they subsist on exotic plant life, weird supplements (Pearl? Seriously?), and over-priced yoga.  Sorry, Amanda Chantal Bacon. You haven't inspired me to eat better or exercise more. Your routine is just too far out there in alien land for me to even comprehend, and your diet sounds weird, unappetizing, and majorly lacking in salt. But one thing you HAVE inspired me to do is eat more bacon. And for that, I am more than thankful.

Posted by ajoneswebb at 1:43 PM