He Can't Fit All That In A Backpack

Currently, my oldest child is tying up loose strings and packing for Basic Training. By "tying up loose strings" I actually mean seeing all of his friends, eating as much fast food as humanly possible, and surfing the internet on his cell phone. I wish it meant cleaning out his room, because God knows the thought of that place in its current state, closed up for 16 weeks, frightens the hell out of me. At the end of this, we could open the door and some new nuclear-resistant biological weapon could walk out on its own accord and shake my hand. I think it's already gaining strength under the bed.

But his sister is big time Jonesing for his room, so if he doesn't get around to it before his ship date, I could just let her deal with the Super bacteria festering in there. 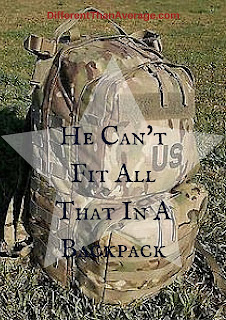 He is however, packing his bag.

In dude-like fashion, he seems to think this is pretty cool.

I'm struggling with this.


Years of mom-like preparedness has conditioned me to over-pack. "Luck favors the prepared" has been my motherhood motto. From the first time I packed a simple diaper bag for an hour at the park, I learned that having too much is better than having too little. Extra diapers, wipes, snacks, at least two changes of clothing, a jacket, definitely a blanket, an extra sippy cup, bottled water, a pack of tissues, clean socks, a hair brush, and a roll of duct tape (just in case) were the standard contents of my everyday travel bag. A trip to Grandma's might require a lot more. I could pack based on a case by case basis, but nothing less than those absolute essentials.

I've passed the prepper gene on to my children, too. My son carries a well-stocked first-aid kit in his truck. (It includes duct tape in case you were wondering). And my daughter has been known to have anything we might need tucked in her purse, whipping whatever it might be out with a flourish, leaving us all surprised and impressed with her thoughtful preparations. She keeps a pair of binoculars in there, for chrissakes. You know, for those random bird-watching emergencies. And I'm assuming the requisite roll of duct tape is in there, too.

And if you're with my family at the park or the grocery store or the public library, should the need arise, any one of us can whip out a pocket knife, a lighter, some loose string... or duct tape if necessary. (You never know what sort of grocery store emergency might require duct tape.)

It's difficult for me to come to grips with sending my firstborn child out into the world without at least a roll of duct tape. How could he possibly have everything he needs?

While actively fighting the urge to shove some extra socks into his pack, I came to a sudden realization. He already has everything he needs.

The meager pile of belongings he's cramming into that backpack doesn't represent everything he's taking with him. Not even close. He's taking far more than physical belongings.

His mind and his character hold more than that relatively light bag he will sling over his shoulder as he walks away.

In addition to that extra pair of underwear and a simple change of clothes, he's also taking a strong sense of family. Even though we aren't going with him, he knows that he has people who love him beyond measure, who are always on his side, and who share an abundance of corny inside jokes. He takes with him a sense of belonging that not everyone has when they first step out into the world. No matter where on the globe he might land, there is a cheering section over here that can get pretty freakin' loud. If he ever doubts that, I hope he can conjure up memories of his little league pitching career. Yeah... this family earned a reputation for being loud and obnoxious that year.

He's also taking his self-confidence. While I know that basic training will do everything it can to wear him down, I take comfort in knowing that he has a strong sense of self. He has a tough inner core and strong emotional fortitude. I am confident that in the middle of physical and mental torture, he will be able to hold onto the knowledge that he is valuable and capable of accomplishing whatever he wants to achieve. I hope that during rough times he will remember pushing through his perceived limits to gain something great, like having that black belt tied around his waist.

His appetite for learning will also come in handy. He can't leave that one at home. That desire to learn was fostered at home and fed through Google searches and trips to the library. It's part of who he is. Exposure to new situations and circumstances will only improve who he is already. I know that he will face challenges head-on with an eagerness to know more and to be better than he was the day before.

He has massive amounts of drive and ambition. That wasn't on the packing list the recruiter handed him, but there's no way he's leaving that behind. He has a can-do attitude and a natural determination that will push him through difficult times, that will constantly compel him to exceed yesterday's results. For him, failure is not an option.

And most importantly, he takes with him a sense of a higher purpose. That's the whole reason he joined the Army in the first place. He wants to make an impact, to inspire and help others. He wants to matter. I hope he understands that he already matters a great deal, but what more could a mother ask for from a son, that he want to make a difference?

Plus honesty, integrity, work ethic, hope, courage, and a corny sense of humor. Those are going, too.

As you can tell, he's pretty prepared even with such a light bag. He's taking an awful lot with him, things that can't be neatly folded and stacked in an orderly fashion, things that won't fit in that Army-issued duffel, because they aren't "things". But isn't that true of life? The "things" that matter most aren't "things" at all.

I know he's ready for whatever the world throws at him. I'm thankful that he has actively cultivated such strong character, that he has put so much value on what really matters, and I take comfort in knowing that he takes with him things that no one can take away.

I still wonder though... do you think he'll notice if I slip a roll of duct tape in his pack? You know... just in case.

Posted by ajoneswebb at 1:46 PM

I definitely laughed out loud at the duct tape.

Some years ago, we were at a wedding, and the soles of my 3-year-old daughters (hand-me-down) shoes started to separate from the tops. My 12-year-old son whipped out a roll of duct tape and made a very effective, if someone odd-looking, repair. I asked him, "Why on earth do you have a roll of duct tape with you at a WEDDING?!" He said, "In case I need it for something." Then, the brilliant logician that I am, I said, "But what would you need duct tape for at a wedding?"

His response: "Mo-om...like, to fix shoes or something?"