The first spring we lived in this house, I was ambushed by a smell. Stepping out onto the back porch, a strong heady fragrance hit me unawares. One second I was a 30-something mother of four, baby balanced precariously on one hip, a bag of garbage clutched in one hand, innocently headed for the backyard dumpster. The next I was five years old, on my cousin’s farm, fishing with my dad.

When we bought the house, I didn’t know what the thick twisting vines climbing the pecan tree on the corner of the property were. I vaguely remember thinking that we should pull them down before they pulled down the tree. But it was summer then, they just looked like a generic green nuisance.  Then our first spring in the new house burst into fullness, and those vines bloomed bright clusters of delicate lavender flowers. 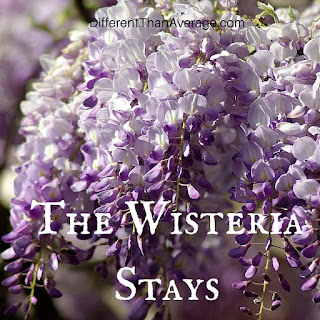 That day on the back porch, the fragrance from the wisteria (once only known as the "generic twisting vines") smacked me right in the face with a memory so clear and so vivid it brought tears to my eyes (although the water that collected there could have just as easily been caused by intense seasonal allergies). For just a brief second I was no longer a mother toting a toddler and a sack full of kitchen garbage. For just a millisecond I was an excited little girl, toting a short little fishing pole, afraid to cross the bridge to my cousin’s pond because of the bees floating in and around delicate purple flowers.

There are so many memories knitted through my brain from that tiny little farm pond. I caught my first largemouth bass there, took my first trip in a rickety little john boat, desperately clutching the sides for fear of it tipping. I remember family picnics eaten on the cool, pounded dirt banks, my mother with the sun on her face. My father happy with fish slime on his hands. It was such a rare thing for them both to be happy at the same time.

And climbing and twisting through those childhood memories is the wisteria. It grew all over the banks of that farm pond, twisting through the trees in a knotted mess. And the smell of those blossoms, it hung so thick and sickly sweet, like a fog. My memories are drunk with the fragrance of it.

When my husband took to the back yard with an inspired motivation to conquer the tangle of vegetation along the back fence, I stopped him short of the gnarled mess that climbs the pecan tree.

“The wisteria stays.” I told him with an authority he didn’t dare question.

Every single time it transports me back to childhood. Every spring, when the wisteria blooms, I am a little girl without a care in the world beyond a vague threat of buzzing bees. But my hand in the big protective hand of my father takes even that fright and soothes it away.

It's been there every spring, with big bursting purple blossoms, as my children have played in around the tangle that still threatens to pull down the pecan tree. They've played hide and seek in the gnarl of vines, using the pecan tree as "home base". They've suffered bruises and scrapes in desperate squealing childhood attempts to just touch it with the tips of their fingers. The base of that tree and the wisteria that winds around it has meant safety. Home base is the only safe place in childhood games.

All of their childhood they've played in the shade of the tree. They've grown up in and around it. The wisteria must be tangled through their memories in much the same way it is in mine. Backyard picnics and Easter egg hunts, watching neighborhood squirrels and jumping from the backyard swings, all of those memories must be laced with the smell of the wisteria. It must smell like Home.

The wisteria bloomed this week, just as Daniel was slinging his backpack over his shoulder and heading away. The first one of my babies has lept from the nest. It's been harder than I expected it would. He was much more ready to go than I was for him to leave.

But I'm glad the wisteria busted forth, its pungence calling in the bees, wafting across the lawn to tell him good-bye, while simultaneously calling him back to "home base". I know he'll be back, if just for a little while, to brush his fingertips against safety. Home base is always always a safe place, even after we've outgrown childhood games.

Yes. The wisteria stays.
Posted by ajoneswebb at 2:07 PM