10 Ways Playing Outside Will Make Your Kid Smarter

When I was a kid, I lived outside. Most warm evenings would have me and most of the neighborhood kids riding bikes, building forts, catching lightning bugs, or just laying in the grass until the streetlights blinked on or our mothers called us for dinner. I grew up in an age when organized athletics for five year olds were rare, when parents didn't orchestrate their children's every waking moment, when mothers and fathers didn't feel so pressured for their kids to perform and succeed. There was an abundance of free time and my mother didn't want me in her hair. I am a much better person for it. 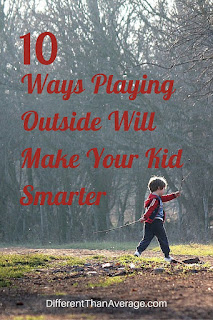 Today, the average American child spends as little as 30 minutes outside in unstructured play each day. Let's be honest, that's not enough time to organize a game of stickball or terrorize the neighborhood in a bicycle gang or even to get lost in thought lying in the warm spring grass. What are our kids doing with their time? Most of it is spent indoors behind a desk or dazed behind an electronic screen. The average American child spends as much as seven hours using electronics every day.

It's a sad fact that our kids would generally rather FaceTime with their friends than actually play with them.

But aside from "free time" spent on computers and tablets and cell phones, parents are overly concerned with artificially enriching their children's lives. Organized sports, and dance classes, and math camps, and scouts are where parents want their kids to spend their "extra" time. By organizing and carefully constructing a childhood, they hope to give their kids a leg up in the human rat race.

It's a common thought that if a child isn't spending time in school achieving academic excellence, then they should be studying and completing worksheets, and if there is still time left over, they should be engaged in carefully coordinated activities designed to make them better, smarter, higher-achieving people. All of this is going to have to go down on college applications one day, so we might as well start now and make it look good.

But there is no "extra" time. Kids are like us, they only have time. There's nothing extra, and too much is sucked up by living a script someone else has created for them. Kids need to write their own scripts, just like adults. They need freedom. And quite often, they need to be outside and engaged in free play to become whole human beings.

Parents, if you're worried about your kid getting into Harvard (and if so, I argue that you might be worried about the wrong things, but that's a subject for another blog post), you still might want them to back away from the worksheets and violin practice and just go outside. There are a number of ways that playing outside makes kids smarter.

1. Playing outside improves focus. A 2008 study from the University of Michigan explored the cognitive benefits of interacting with nature. The study found that just walking outside, no matter the weather, and no matter whether the experience was actually enjoyable, helped improve memory and attention by 20 percent. So even when they don't want to put down the tablet, and they complain about being miserable, just send them outside anyway.

2. Playing outside stimulates creativity. During open-ended play, kids have to make up ways to entertain themselves instead of relying on adults to do it for them. Being outdoors where there are rocks and dirt and sticks presents limitless opportunities for play experiences. No two playtimes will end up looking exactly the same. Being outside presents a plethora of opportunities for imaginative play, creative building, and inventive activities.

3. Playing outside promotes problem solving. During free outdoor play, children make up their own rules. They learn what works and what doesn't. They learn when to keep trying and when to try something else. If playing with other children, they learn what types of interactions promote cooperation and which cause frustration. By solving their own childhood problems, they'll be much more independent problem solvers as adults. Practice makes perfect in this area of life. If never given the chance to practice solving their own problems, how can we expect them to magically do it once they turn eighteen?

5. Playing outside improves language skills. Children are so often told that they must be quiet indoors. "Use your quiet, indoor voice," we often hear teachers tell their young pupils. But outside, children are free to be loud. Instead of others encouraging them to hush, they can experience a freedom to speak that the indoors doesn't always provide. Many children (especially boys) are able to find their voices outdoors. And cooperative play, gives plenty of opportunities to communicate with one another. Children may issue instructions to each other on the building of a fort or the intricate rules of a spontaneous game.

Being outdoors always creates a lush context for vocabulary development, too. From discovering tiny animals, to expressing changing weather and seasons, to describing the texture rich environment of trees and stones, children are encouraged by the outdoors to try out new words and make them their own.

6. Playing outside is multi-sensory. During outdoor play, a child uses all of his senses: touch, sight, hearing, smell, and even taste (If I had a dollar for every time I told a child, "Don't put that in your mouth!"). Not all children learn the same way. By opening up experiences to all of a child's senses, we help each child learn in their own unique way.

7. Playing outside relieves stress. It's no secret that today's kids are stressed out. As many as one in eight children and 20 percent of teens suffer from severe anxiety disorders. Modern children face pressure to perform from their parents, their teachers, and their schools. Children and their parents start thinking about colleges as early as kindergarten, and school systems place a huge emphasis on student test scores. It's no wonder our children feel stressed out. But more than 100 research studies have shown that time spent outdoors reduces stress, anxiety, and depression. The cure for childhood depression and anxiety is literally waiting right outside our door. And a relaxed and unworried person makes a better learner.

8. Playing outside makes children healthier. You might not think that healthier equals smarter, but sick kids miss school and can easily fall behind. Besides, learning is more difficult when you don't feel well. Spending time outdoors strengthens immune systems, making children healthier and less prone to catching common illnesses, and therefore less likely to miss school.

9. Playing outside encourages physical activity. Outside, children are free to run and jump and climb. There are opportunities to be physically active that just aren't available in most indoor environments. There is a growing body of research that shows how physical activity positively affects brain health. Here are just a few:


10. Playing outside is fun. Learning is easier and longer lasting when it is fun. Being outdoors riding bikes with friends, organizing neighborhood "army" battles, and rushing to home base in impromptu games of tag are just plain fun. Those are the experiences that will stick with kids long after they've grown up and moved on to the "real world".

So if you want your kid to get into Harvard, you might just want them to step away from the homework and just go outside and play. They'll be smart for it... and certainly happier, too.
Posted by ajoneswebb at 11:49 AM