Should Patriotic Hypocrites Just Sit Down and Shut Up?

To me, the thought of spending two hours of my life, glued to an electronic screen watching multi-millionaires chasing around an oddly shaped ball is as exciting and intriguing as undergoing eye surgery. My husband and younger son are fans, however, so sometimes the sport weasels its way into my life on Monday nights and Sunday afternoons. They yell at the TV. I roll my eyes and attempt to ignore them by reading a good book.

But even non-football fans have heard of Colin Kaepernick. He's the San Francisco 49ers second string quarterback. He's suddenly famous for refusing to stand during the playing of the National Anthem. He says he's protesting racial oppression and inequality in the United States. (I hope the irony of this isn't lost. 68% of NFL players are black. I love nothing more than irony.) 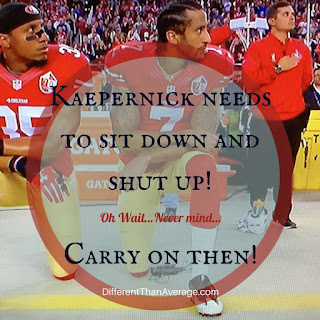 Monday night, while my husband and son were forcing me to acknowledge the existence of football, I became acutely aware of this "movement" that Kaepernick has created. Prior to kickoff for the 49ers/Rams game, I stood in my own living room while the National Anthem played, not just out of a sense of patriotism. I also stood because the dog had stolen my spot on the couch, but mostly because I was transfixed by the spectacle the media was creating right before my very eyes.

While violinist Lindsey Stirling played the notes of our The Star Spangled Banner, the cameras panned back and forth focusing on the controversial displays by the players. Viewers didn't get to see Stirling's face as she poured herself out in her performance, not once beyond the first few notes did the camera focus on her. We didn't even have long enough to mock her questionable fashion decisions (Leggings under ripped jeans shorts? Lindsey Honey, you're playing the National Anthem.) before the camera swung around to focus on Kaepernick and some other football dude (Actually he's 49ers safety, Eric Reid.) taking a knee. The camera focuses in closeup on the two non-standing players and then panned to focus on several more players with fists raised in the air. Then the cameras focused back in on the kneeling players. Repeatedly. From different angles.

Kaepernick and the other demonstrators definitely had the spotlight. Not once did the camera really focus on our servicemen and women on the field holding a stadium-size ginormous American flag. Only briefly during 92 seconds Stirling played The Star Spangled Banner did we even get a glimpse of our nation's flag. The fighter jet flyover and bursts of fireworks were just background noise to Kaepernick's decisive inaction. I only know there were planes because I heard them. They certainly weren't shown on screen.

The cameras chose instead to focus, for almost the entire minute and a half, on the division, the players acting out (or not acting, because not standing is actually inaction). Because they knew that it would rile people up, wad up some panties, stir the pot. Television ratings thrive on that sort of thing.

What by intention is supposed to be maybe the most unifying act in the country, standing together while the National Anthem is played, has suddenly become the most divisive.

Some people are applauding Kaepernick for standing up for what he believes in. (Um... guys? He's not actually "standing".) While others are more than ready to slow roast Kaepernick over an open barbeque pit (Mmmmm... tailgating at it's finest.)

Some people think Colin Kaepernick is brave and bold and want to pin some sort of hero's medal on his football jersey. They think that more light needs to be shone into the dark places of racial tension in this country. (These people apparently don't watch the evening news, because I'm seeing an awful lot of light shining as violent protests and mothers of sons killed by "police brutality" are paraded again and again across the commercial media stage.) But we aren't even talking about the police or racism or inequality.  Instead Kaepernick has ignited a debate about how we should protest, whether we have the right. He has started dialogue about unconditional patriotism and forced conformity, not racism.

Other people are shouting and stomping and throwing generally unattractive temper tantrums about how disrespectful Colin Kaepernick is being toward the men and women who died defending his freedom. They are clamoring on about how he should just get out if he doesn't like this country. "Don't let the door hit you on the way out, Colin!" I hear them ranting. There's likely a long line of people ready to help him pack his bags.

But Kaepernick isn't disrespecting any soldier dead or alive. Those people signed up to protect his freedom to express himself and his discontent with this country. If you believe the patriotic hype, soldier's shed their life's blood to ensure that no government could force Kaepernick or any other overpaid athlete to stand when he doesn't want to. I don't think Kaepernick is disrespecting dead soldiers. If anything, he's honoring their sacrifice by standing up for what he believes is a grave injustice. They died defending that freedom. He's actually exercising that freedom. Whether you agree with his platform or not, Kaepernick sees something he wants to change, and he's making a statement about it, AND he's donating large portions of his multi-million dollar income to help make it happen.

That's pretty f*cking American when you think about it. In his own way, Kaepernick is ensuring that blood wasn't shed in vain. I say let him exercise his rights. (I don't agree with him, so please hold your hate mail. But I stand for his right to sit for whatever he wants to.)

Also, I don't mean to get all political, but remember, I love irony. I find it incredibly ironic that so many of the people who are willing to throw Kaepernick out of this country for expressing his displeasure with it are the same people claiming this is the greatest country in the world while simultaneously chanting "Make America Great Again".

Let that sink in for just a minute. They are shouting at Colin Kaepernick for his ingratitude and disrespect for this country, because it is "the greatest country in the world". Yet their current slogan du jour is "Make America Great Again". I'm getting patriotic whiplash over here.

And in an even greater display of irony, they are shouting about Kaepernick disrespecting veterans while sporting campaign hats and t-shirts promoting a candidate that disrespects POWs, insults gold star families, lies about donating to veteran charities, and insults veterans by claiming to have "more military training" than most of them who have actual military training.

Here's the thing, you can whine and cry and throw things at the television. You can boycott the whole freakin' NFL because Colin Kaepernick is disrespecting our veterans. Heck, the whole organization is obviously anti-American for not forcing him to stand up. But deep down, you're all just hypocrites.

You can wave your flags all you like, you can burn jerseys, you can piss red white and blue (although you might want to get that checked out by a physician) but none of that does anything to support the military. Standing up while some musical notes play does nothing for the 300,000 veterans who've died waiting for health care. Waving flags does nothing to support the 22 veterans who will commit suicide today. It's just a fucking football game. You aren't really doing anything. What have you done today to support our veterans? Wearing red, white, and blue or sporting a yellow ribbon sticker on your minivan doesn't count either.

You don't even understand what's going on.

Meanwhile you want to force him to stand or else leave the country. Could there be a stance any more UN-American?

Sit down and shut up, beer-swilling, flag-waving, overly outspoken patriots. You are full of symbolism over substance. You claim to care about this country. but most of you don't even vote. You kind of disgust me. Can't you see there are bigger fish to fry? And our veterans' issues are just the beginning.

Listen, I don't really understand why we feel a need to flex our military muscle with flyovers and active duty soldiers on sporting fields before football games. But I honestly don't care one tiny iota about whether or not some over-paid athletes sit, stand, or do cartwheels during the National Anthem.

There are more important things to worry about.

While everyone was arguing about Colin Kaepernick, North Korea fired three ballistic missiles toward Japan. As I'm writing this, U.S. nuclear-capable B-1 Bombers are flying over South Korea in a show of force meant to cow North Korean aggression.

While all eyes were on Kaepernick, Native Americans were attacked on American soil by an oil company. While peacefully protesting the construction of the Dakota Access Pipeline, which threatens sacred land and water quality, members of at least 100 Native American nations were assaulted by a private security firm which utilized tear gas and guard dogs. There's been almost no media coverage of the event.

While everyone was raging and distracted by insignificant football players, Global Justice Now released some disturbing figures. Multinational corporate behemoths like Shell, Apple, and Walmart rake in more revenue than a large number of the world's countries. Now corporations have more global power than many sovereign nations. "Everybody wants to rule the world." At least according to Tears for Fears. Hear that, North Korea? You don't need nuclear weapons.

Please, people. Don't you realize this is all just bread and circuses?

Maybe you should all take Kaepernick's lead and just sit down and shut up. At least until you can figure out what's actually worth standing up for.
Posted by ajoneswebb at 2:49 PM

Email ThisBlogThis!Share to TwitterShare to FacebookShare to Pinterest
Labels: freedom, freedom of speech, the status quo