Are You Angry Yet? - How Big Business Bought Science

This week everyone has been pretty preoccupied with angry Colin Kaepernick memes, so I don't doubt you missed it. You know, one of the things we should all actually be angry about? Stuff that affects us more than football players?

I'm pretty sure most of us suspect that we are being lied to, by politicians and big corporations and our teenage children, but it isn't often that we get actual proof. Cold hard evidence that we are being lied to in big nasty ways hit the newsstands this week, and it had absolutely nothing to do with the current presidential race. This time it's our health. The testament of corruption and deceit was published in JAMA Internal Medicine in the form of a historical analysis of thousands of pages of correspondence and documents. 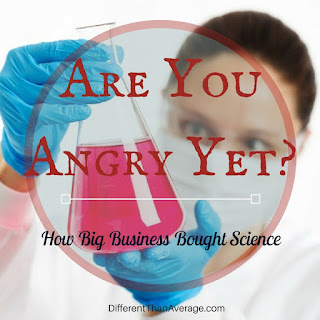 In the late 1960s, huge sugar industry trade group, The Sugar Research Foundation, struck a sweet deal with Harvard scientists to refute existing concerns about the harmful effects of sugar on the human body. What is the going rate to buy a Harvard scientist? It only cost The Sugar Research Foundation the equivalent of $48,000 in today's economy per scientist. What a sweet bargain!

It cost the rest of us a lot more.

The skewed findings of the purchased Harvard researchers was published in The New England Journal of Medicine in 1967.The link between high sugar intake and coronary heart disease was already known, but the Harvard scientists set up a smoke screen, suggesting dietary fat as the big nasty coronary culprit.

It was a diversion that derailed nutrition research for decades and likely profited the sugar industry billions of dollars. As a result of that "research", several generations of consumers have been urged by health officials to reduce fat intake in order to prevent heart disease. For many, this meant an increase in the consumption of low-fat high-sugar foods, contributing to this country's obesity epidemic... and increasing the risk of heart disease.

One of the bought-and-paid-for scientists, D. Mark Hegsted, actually became the head of nutrition for the United States Department of Agriculture where he helped draft the government's dietary guidelines, just in case you were wondering how big or how far this thing goes.

This should make us question everything.

Up until this week, if guidelines or information or recommended health practices had come from Harvard research or if it was published in The New England Journal of Medicine, you would think that information was solid and reliable. That's a peer review journal. That's the serious stuff. Reliable. Trustworthy. Credible. You could take that information to the bank!

Now we have to wonder, "What other lies are we being fed for the sake of corporate profits?" Who else is lying to us? What information are we taking for granted as gospel truth that is just skewed research to push an agenda?

How much of the information that we are being fed has been manufactured by Big Pharma or some other money-hungry organization?

It's a frightening prospect. I don't know who to trust anymore, because the bigger things get, the more corrupt they become. Scientific research isn't about integrity or transparency or honesty or the greater good of Society. It's about profits. How many Americans were sent to early graves because "scientists" were willing to sell their souls and their principles for a few grimy dollars?

But mostly I'm frightened. It's getting harder and harder to discern Truth these days.

It's probably time to dust off my trusty (yet fashionable) tinfoil hat.
Posted by ajoneswebb at 11:09 AM