Why I Won't Raise My Children to be Politically Correct

Words are just words. But what if those words are offensive? Are they still just words? Does the responsibility of the offense fall with the speaker? Or with the listener?

This weekend I had a discussion with one of my children over a word he used to describe someone. He used the word "retarded". Anyone who is paying attention knows that word doesn't make the short list of politically correct adjectives. While the word was fairly acceptable just a few decades ago, its use has become basically intolerable.

I asked my son to use a different word. The logical question followed: "Why?"

Not my best parenting moment. But the truth is, there isn't a good answer. Some words make the socially acceptable list and others don't. I'm not sure when the word my son used jumped from one list to the other. I'm not sure why there is even a list in the first place. Who gets to decide which words belong on which list? 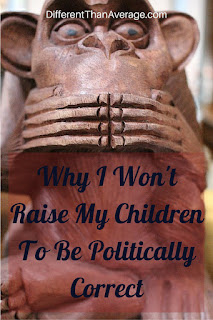 I suppose in the beginning the PC movement had good intentions. Attempting to rid society of derogatory language must have been an attempt to curb racism, homophobia, sexism, ableism, and other forms of discrimination. But in its attempts to create bias-free language, things have gotten a little out of hand. Censorship is a dangerous and slippery slope.

Banning words because someone might feel offended opens a can of worms. How many people must find a word offensive before society determines it unacceptable? 1,000? 100? One? Some people may find a word offensive while others don't. Which group gets to decide the morality of the word? All words are potentially offensive. Every word, no matter how seemingly innocuous could be associated with something negative, so any word could at any time come under scrutiny.

The growing snowball of the politically correct movement is out of control. Consider the "ban bossy" campaign. Relatively successful and influential individuals like Condoleeza Rice and Jane Lynch committed to a movement to ban the word "bossy" because it could be potentially harmful to little girls. Whether or not they are right about the negative effects of a simple two-syllable word, the concept of banning a word, any word, is the stuff of which apocalyptic dystopian novels are made.

And its not just youtube videos and pithy hashtags the PC movement is using. The snowball is crashing through our institutions of higher learning, obliterating words and entire ways of thinking as it goes. Universities used to be places where paradigms were shifted and ways of thinking expanded, but rapidly they are becoming indoctrination centers with strict rules of censorship. It is impossible to openly and freely express opinions and concepts when entire ways of thinking are outlawed just because someone's delicate constitution may be offended?

Don't believe me? Here are just a few examples of ridiculous campus censorship:

Feeling offended is subjective. In the same way that beauty lies in the eye of the beholder, perhaps feeling offended lies in the ear of the listener. To each his own. In that case, can a speaker really be held accountable for the emotional reactions of those who hear his words?

Most of us are adults, and we should take responsibility for our own reactions. When we blame someone else for our feelings of anger or embarrassment it shows a severe lack of maturity. We can choose to ignore or respond to words, but we should not be blaming others for our reaction. That is abandoning our own responsibility, our own personal power.

But the real danger of the PC movement is in the suppression of free speech. That suppression is far more dangerous than the feelings of unease that certain words seem to incite. Banning words that are often used to express homophobic or racist ideologies does not destroy the ideologies, but it does create a false sense of peace and security. We cannot challenge the bigotry we don't know exists.

Defending personal beliefs in the face of criticism used to be part of the college experience. To never have beliefs challenged or scrutinized stunts intellectual growth. It is a major disservice to our young people to allow them to walk through life wrongly believing that everyone thinks exactly like them, or even to think that everyone should.

By limiting free speech, the PC crowd is also limiting free thought. Thankfully, we don't yet live in a society with a hive mind. But as our vocabularies are rapidly constricted, as we descend into our own version of 1984 Newspeak, variations of thought become more and more difficult. And without freedom of thought there will be no one to challenge corruption and injustice and oppression.

Isn't that what we're fighting anyway?

A useful technique in this situation may be to go to the Dictionary! Does this word actually mean what you are trying to say?or is it just a slur?
Ask,What are you actually trying to say? Maybe "retarded" IS actually the correct word;outside of concerns about PC.That others don't know the definition of a word is a problem of their ignorance.

These days, yes, it is considered more kind or empathetic to use a term like intellectually or mentally "impaired" but as any parent or grandparent knows, that will not be the typically common (for shock value) word that is so easily picked up by younger children who usually hear the more p.c. offensive choices from their own taunting peers who, in turn, have first heard them from parents or otherwise influential adults in their limited sphere of reference.

Therefore, what I found to work best...which was long before there was such societal conditioning or 'p.c. patrol' was akin to 1.) showing as little shock as was possible, 2.) asking my child what they thought the word meant, and 3.) then helping them investigate what might be a more fair-minded and/or empathetic (stand in others shoes) word...which, instead of more negatively disparaging, was akin to choosing the higher road for one's own increased quality of understanding.

I mean, those were some of our greatest moments of interaction between engaged parent and receptive child that had everything to do with subtle yet proactive nurturing to build upon their strength of character (do/say right action even when no-one is watching) instead of so opportunistically using a more crass (low value) word that was primarily about frivolous assumption and/or judgement while tearing the 'other' down. All in all, we used the terrain of words and their intent like a mindfully thoughtful game that, with exciting exploration and attention, needed to be solved; and what kid amongst us wouldn't be duly enticed. ;-)

Dear Alice Jones Webb, after meeting you just today (Activist Post) do trust I am not only a kindred parent/grandparent but so am I already a devoted fan. In other words, feisty is as feisty does...and I, for one, am surely hooked. Thank you!