I Have Something To Say To Parenting Critics

Today, I am feeling vindicated. It's been a long time coming and a tough road to get here.

This is a post for the parenting critics, the family and friends, neighbors and acquaintances, who judged and disapproved, either publicly or silently. It's for everyone who looked at me and my children when we were in the trenches of raising and growing, and scowled or gossiped or criticized. It's for people who made snide comments or called my children names. For everyone who thought I was ruining my children. 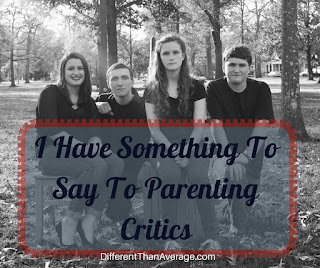 Raising kids is hard. It is inherently difficult to just get through the long days, keeping everyone alive and fed and the house standing. It wears on the body through exhaustion and the mind through constant stress. There is already a high level of self-doubt that goes hand-in-hand with being a mother. No one wants to raise a serial killer or a lazy freeloader or someone who orders a well-done filet mignon at a nice restaurant. Because the stakes are so high and we love our children so much, it's easy to freak out and overstress. It's a miracle if we get to the end of this parenting gig without an ulcer. I'm losing my hair.

There are already enough "parenting experts" out there to offer advice and judgement for everything a parent does in raising their children, but when I chose the road less traveled, to veer from the mass-American parenting herd, to do my own research and think for myself, the critics came out of the woodwork like swarms of bugs.

So this post is for whoever called the Department of Social Services after my son's home birth with accusations of neglect and endangerment.

It is for the family members who openly criticized my nursing toddlers and my decision to let my young children take the lead in the weaning process. For everyone who thought I was making my children too dependant, who believed they would never be able to function without Mama.

It is for the people who questioned our decision to homeschool, thinking we couldn't challenge them intellectually and that they wouldn't gain the social skills they would need to function in the real world. It is for my children's "friends" who told them repeatedly that homeschool kids weren't as smart as kids who went to "real" school.

It is for the neighborhood ladies who fussed about my barefooted children running up and down the street, waving sticks and being loud. For the ones who thought it better if children were kept indoors and made to walk in orderly lines, rather than allowed to roam free and play outside.

It's for the family friend at Thanksgiving dinner who suggested I beat my child because he was "being mean" to hers.

This is for everyone who viewed us in the midst of the process and jumped to conclusions about how my children would turn out.

I know that you saw a  whining toddler, tired and frustrated, who was comforted only by nursing. It was easy for you to think he should be less dependant. It was easy to blame the unusual practice of child-led weaning on his apparent over-attachment to his mother.

I know that you saw an eight year-old child who couldn't fall asleep without his mother's presence and you thought I was babying him, stunting his emotional development. It was unusual to see young children, at least in our country, who aren't forced to bed in dark rooms by themselves each night, forbidden to enter the comforting presence of their parents after 9 PM.

I know that you saw my children struggling with reading and multiplication tables. You saw me slowly move at their pace and you wondered why I didn't push them more, wondered how they would ever keep up with their peers.

I know that you saw my children running free and making noise and being wild and you wondered why I didn't tame them. You wondered how they would ever learn manners or civility.

But you see, I wasn't looking at my children as they were in the moment. Because I wasn't raising children. I was raising people. I was raising adults. How they needed to be in the moment at age two or eight or eleven didn't matter all that much to me. I was making decisions in my parenting approach that I believed with deep conviction would help produce mature, emotionally healthy, well-rounded, intelligent men and women.

And here we are. Just look at them.

My oldest just turned twenty. He's a well-informed freethinker and a registered voter. He's a second degree blackbelt in karate. He's held down a steady job since he turned seventeen. He pays his own bills, owns his own vehicle, and has a generous chunk of money saved. He has joined the US Army (which has been a goal of his forever) and leaves for basic training in under three weeks. He is thoughtful, confident, independent, intelligent, and polite. He isn't who you thought he would be at all.

His sister is 17. While she isn't quite considered an adult by Society's standards, she is definitely not awkward or stunted. After being homeschooled until 9th grade, she is now top of her class at an alternative early college program where she completely and independently keeps up with her own schedule. She has an active social life and a large group of friends. She has a job and pays her own bills. And she recently participated in a scholarship competition which included an individual interview by a panel of judges, speaking on stage to a crowded auditorium, a talent performance, and a scholastic overview. She won! Not bad for an awkward sissy homeschooler, huh?

And I have two more fabulous children coming behind them. Just wait to see what they accomplish. Just wait to see the people they are becoming. I assure you it isn't awkward, or unmotivated, or shy, or dependent.

So listen up, anyone who ever thought I was ruining my children. Listen up, everyone who said mean things or thought mean thoughts about the way I was raising them. I have something very important to tell you.

These folks should be groveling on their knees, asking forgiveness from you and your kids, and taking a close look at whatever it is that makes them so self-serving. What kind of person says these things about adults let alone kids? Their thoughts are a demonstration of who they are and really have no reflection of your family. Good for you for speaking up.