The weather has been beautiful this week. Warm temperatures and sunny skies have driven us outdoors in efforts to melt off the lingering winter doldrums. What better place to enjoy early Spring than the park?

Heading to the park with four teenagers (well . . . really only two. The oldest just turned twenty, but I'm still in denial. And the youngest is an incredibly angsty twelve.) is different than I remember. No diaper bags had to be packed or snacks prepared. There was no strapping into car seats or remembering favorite toys. We just decided on a whim and left.

But, to be honest, once we got there, I didn't know what to do. I no longer, have to keep a watchful eye on the kiddos to make sure they don't kill themselves, or each other, or perfect strangers. My attention isn't pulled in four different directions at once. I didn't have to help anyone up the slide or push anyone on the swings.

Basically, I spent an hour sitting on a park bench looking lost.

When my children were much younger, park trips were harder. I always planned for them to be a retreat from the house, a chance to unwind and relax, to have fun and decompress. But they rarely were any of those things. A trip to the park usually meant an hour of being hyper-aware of everything the children did or said, coupled with nasty feelings of guilt and embarrassment as the kids said things in the presence of perfect strangers that were just a bit too intimate or socially awkward. 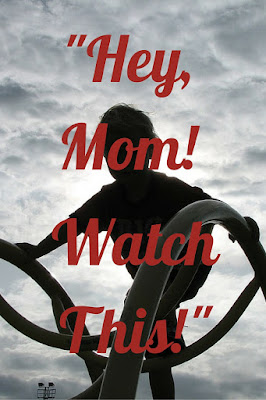 But the thing that always wore on my nerves were the cries of "Hey, Mom! Watch this!"

No less than 47 times per park visit my darling oldest child would shout these words. From the top of the slide. The edge of the monkey bars. The corner of the sand box. From two feet in front of my face. I realize that being the oldest of four, he craved attention that I wasn't always able to give him. Too many times he wanted me and I was tending to messy diapers and hungry babies.

But the cries at the park for my undivided attention often irritated me in ways that mothers should probably not be irritated, because when a small child begs you to "watch this" there is a 95% probability that the thing he does is not going to be particularly impressive.

His "watch this" was most likely to be followed by a failed attempt to hop on one foot, or a display of his questionable running skills, or a really goofy face. Sometimes it was just him smiling at me, just an attempt to pull me out of my own world and into his. A plea to connect, to see him, really see him, not just with the glazed-over look that exhausted mothers view the world.

"Are you watching, Mom?" he would stop to make sure he had my full attention before plunging through with the typically unimpressive feat he had planned.

So I would watch him each time, rarely impressed with his bunny hops and hole-digging and log rolls that coated his thin curls in playground sand. But I watched anyway, because that's what we mothers do. We watch from park benches, even when we can barely stand to watch.

At the park this week, not once did my oldest beg me to "watch this". Perhaps that is why I felt so lost, like I didn't know my place.

He's leaving home for the Army in13 short days.

At the park, he sat next to me on the bench not saying a word.  I think I could still hear him whispering though, as he teeters on the edge of the nest. He whispers, "Hey, Mom... Watch this!" just as he spreads his wings and soars away. Beautiful and capable and strong. This time, what he's about to do is so very impressive that I can barely stand to watch, but this time it is totally worth watching.

Posted by ajoneswebb at 9:55 AM