What One North Carolinian Thinks of the HB2 Boycotts

Just the other day, my oldest daughter and I were zipping up a two-lane backroad toward the North Carolina/Virginia state line, windows down, music up, hair whipping in the wind, when out of nowhere a little red sports car with Florida plates passed us at dangerous break-neck speed.

"Wow" was all I could verbally manage without inserting a few choice curse words.

"Yeah Mom, he's probably just in a hurry to get out of here. He doesn't want to catch the transphobia."

My daughter sometimes has a dark sarcastic sense of humor, but she has a way of making me think. 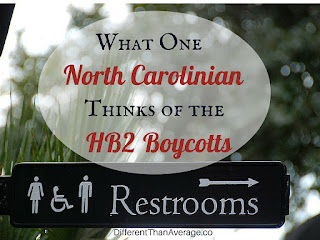 HB2 or "The Bathroom Law" has been all the talk in recent weeks. House Bill 2 passed last month prohibiting North Carolina cities from setting gender neutral policies. If you believe the media (and cruel internet memes) HB2 is about backward bigotry toward LGBT persons (although really, the law only affects the "T" in LGBT). It apparently requires people use the public bathrooms and changing rooms that correspond to the gender cited on their birth certificates. If you believe the hype, because of HB2 North Carolinians are deathly afraid of transgender people raping their wives and daughters in Target restrooms.

I assure you, as a North Carolinian, the issue is a tad more complicated than that, but this isn't really about HB2, or rights versus perceived rights, or gender versus gender identity. It's about people's reactions to a bill most of them haven't even read. Craziness has ensued because flames of misunderstanding have been fanned by just about everyone. Clear battle lines have been drawn in an "if you ain't with us, you must be agin us" fashion the state hasn't seen since the War of Northern Aggression (We still call it that here. If there is one thing Southerners know, it's how to hold a grudge. Especially a well-earned one.)

But it isn't just North Carolinians picking sides. There has been a popular boycott of NC by musicians and corporations and entire US cities. The mayors of Seattle, New York City, Portland, and San Francisco have placed bans on travel to the Tarheel state. Meanwhile, television and movie production companies are fleeing the state. Paypal cancelled a North Carolina expansion citing HB2 and its hatred and bigotry (while maintaining operations in Malaysia, Saudi Arabia, and Singapore where anti-LGBT policies don't stop at public restrooms). And influential artists like Ringo Starr, Bruce Springsteen, Pearl Jam, Demi Lovato, and Nick Jonas (Okay. The term "influential" may be loosely applied) have cancelled their North Carolina shows. It's like they are afraid to step one toe inside of North Carolina, afraid to be tainted with our transphobia, which is apparently more contagious than Ebola or Zika Virus by the looks of it.

This leaves me livid. Not because I was really looking forward to seeing Demi Lovato rock it out live, either. No, I'm upset because these entities would leave North Carolina a moral wasteland. Not that I necessarily agree with their morals or their politics, but abandoning an entire state to wallow in what they consider out-dated bigotry is inexcusable. If they really cared about LGBT North Carolinians, they wouldn't leave them alone with what they consider wolves.

That isn't how you change hearts and minds. You can't do that from the outside, standing across the border, shouting at North Carolinians about how hateful we are. That's poor form. Instead, you cross the lines, you get down in the muck, you get your hands dirty. That's how you change people's minds. It doesn't happen by shouting your moral superiority at them.

Do you know how you enact change? From the inside. You can't boycott away bigotry any more than you can legislate it away. If those artists and politicians and corporations really wanted to do something for LGBT North Carolinians, they would come to North Carolina and use their influence and raise awareness, or better yet, funds for LGBT charities. Imagine the benefit concert possibilities. Of course, that takes effort. It's a lot easier to cancel a tour date or sign a travel ban from behind the safety of an expensive mahogany desk. No effort required.

And while everyone is busy shouting at North Carolina, I have some news for them: Most of us don't care where anyone uses the bathroom. In fact, before the Charlotte law domino that led to HB2, transgender people walked freely into whichever bathroom they chose and nary a person batted an eyelash. If you looked like a dude and you were entering a facility clearly labeled for dudes, no one was asking for confirmation of a Y chromosome for admittance.

It was government that created this problem that government had to swoop in and try to fix while royally botching it up.

But as a mother and a woman, shouldn't I be afraid of creepy men lurking in women's restrooms?

No, I'm not that delicate.

First of all, a public restroom is exactly that. Public. I have no more right to be there than anyone else. It's a shocker I know, but if my daughters or I enter a public restroom and there is a strange dude in a Dolly Parton wig with obvious intent to harm, we have as much right to leave as he has to be there. I assure you, we have enough brains to do so (I can't speak for the intellectual ability of every North Carolina woman, however). We don't have to use that facility. In fact, we could waltz right on over to the men's room and probably pee in peace. Here in North Carolina, there will likely to be a plethora of bold and noble cisgender men to protect us while we tinkle. At gunpoint if necessary.

And in a pinch, my girls and myself could scream and yell for help while force-feeding our attacker his own testicles if it came to that.

That's just how we ladies roll in the Old North State.

I have been teaching Krav Maga to women and girls for over 5 years and we teach a very effective technique which I feel should should be in every woman and girls arsenal.

The technique is the “groin grab” self defense technique which is to be used against a male attacker, which is now taught in many womens self defense classes, and there is actually a little trick to it…

To execute this technique, you’re going to take your hand and quickly grasp between the attackers thighs underhand. Its going to feel like you’re “cradling” the testicles. Quickly grab them and dig your fingertips into the fragile skin BEHIND the scrotum. Then, once you have a good grip, you turn your hand into a vice, with your fingers digging inwards, around the back and over the top of the testicles. If you do it right, you should feel the testes INSIDE your hand which is holding the scrotum. You want, whenever possible, to hook your fingers over and around at least one testicle. One of them is enough.

Then, with your hands in a claw and your fingertips latched around the testes, you turn your hand sharply, as though you were turning a doorknob. Simultaneously, squeeze hard and pull the testicles away from his body as fast and as hard as you can. DO NOT LET GO OF THEM. This is important. What happens then, is that your assailant usually screams out in pain and then tries to grab the wrist of your hand holding him in a futile attempt to try to get you to release him. Don’t. He then quickly loses one of the natural advantages he usually has over us (his strength) within a matter of seconds. Vomiting, curling over, collapsing and convulsing is common. Shock and unconsciousness can set in within 8 seconds. If he initially starts to fight back then you tuck your head in and keep squeezing his testicles until he faints. This only takes a matter of seconds. When he collapses, which he will, you get away to safety as quickly as possible and call for help.

It’s never too late to perform this technique at any stage of an attack, and that even includes the option of reaching down if he’s on top of you, but it is easiest to do when the testicles are exposed and closest to you where you can grab hold of them. I’ve actually met several women in my life who have fought off their attackers in this way and one did it when her attacker was on top of her and raping her at the point he lost control. Don’t ever hold back. Some women scream while they are doing this, and some women think of a loved one being harmed to help overcome any bad feelings of hurting someone else even if they are being hurt themselves. Do whatever you have to do if you feel it helps.

If done properly, and done with enough force, this technique can even lead to the testicles rupturing. It’s actually easier to do than most women believe, and just about all of us have the capability to injure an attackers testicles in this way – whether we are young girls still of school age, or whether we are great grandmothers. We, as women have no part of our bodies as vulnerable as a mans testicles. After all, if you think about it testicles are just small objects of extreme vulnerability to pain squishiness wrapped in a delicate layer of skin which offers them no protection at all from this kind of counterattack by a woman. Most importantly, this fact holds true no matter what size your attacker is, nor how strong he is. And no matter how angry he is, and how much he’s threatened what he’s going to do to you, he’s going to drop. Don’t let anyone (usually men who are very uncomfortable with thoughts of women beating them in combat) try to convince you otherwise.

I know that this advice would have been a difficult read for many women, but our lives are worth far more than a rapists testicles. Please help to share this advice with as many other women and girls in any way you can. It could one day be a life saver.