Do Electronics Steal Your Family At The Dinner Table?

My family took me out for dinner on Mother's Day. Apparently, a lot of other families took their moms out too, because the roads were packed and the restaurants were full. It's an easy way to treat mom to a night off of dinner and clean-up duty without having to actually cook or clean up. It's kind of a win/win for everyone involved, including the restaurant industry.

Since my children are older and actively working on their personal family exit strategies, I was keenly aware of the other families around us, especially the ones with younger children. I'm currently feeling overly nostalgic about the life that was raising small children. With the oldest off at basic training and his younger siblings so incredibly self-sufficient, I can't help myself.

So I watched them all like a creepy person. And I noticed something besides their cute faces and chubby fingers, something a bit disturbing. 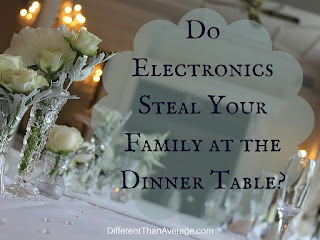 It was everywhere. Young children with their parents, and sometimes their grandparents, aunts, and uncles, at a nice restaurant, one complete with white napkins and candles and attentive servers who bring fresh utensils for each course, were almost completely unaware of their surroundings. No matter which direction I turned I saw little eyes glued to miniature screens.

To the left was the five year-old who held his tablet mid-game as his family entered the restaurant. As the host walked them to their table, where grandma and grandpa were already seated, he kept glancing down at the game like he couldn't wait to get back to it. He reluctantly hugged Grandma, and then, as soon as he was seated, his eyes got that glazed-over hypnotized look to them. Several times during the meal, Grandma attempted to engage her cute little bowtie-clad grandson in conversation, but he wouldn't have any of it. He whined when his mother made him put the device down to eat dinner, and couldn't manage to sit still in his seat, popping up regularly like a jack-in-the-box. He took maybe three bites before he was done and back to his game. The whole of his dining experience was a tiny pixelated screen.

In the center of the restaurant was another family. Accompanying mom and dad and grandma was an older child, maybe 10 years old. He had the look of disdain that you can only find on the face of a pre-teen. As soon as the family was seated, out came the tablet. Again came the glazed-over hypnotized look as the child slouched in his seat watching some insignificant movie on an 8-inch hand-held screen. His mother made him order, but his eyes never left the tablet in his hand. He just mumbled something to the waiter that mom had to ultimately translate. Several times, the child snapped at his mother for interrupting his show, and he didn't even put the device down when his food came. He ate while leaning all over the table, eyes attached to the screen as if by some invisible cord. Dinner went on around him. Several times I wondered if the kid even knew where he was.

I get it, parents. My children were small once, too. Taking them to eat in public is a daunting enough task at a restaurant where everything comes to the table wrapped in paper, but to brave an establishment that wraps its tables in white linen and its dining room in ambience, music, and candlelight, where diners are intolerant of noise and commotion, can cause stress-induced bleeding ulcers and a new slew of gray hairs. Under thaose circumstances, you will keep your kids quiet and seated at any cost.

Thankfully, my children were small before the prevalence of tablets and smartphones and wifi connections. When we took them out to eat, we had to actively keep them distracted. We had to engage them in conversation. We had to play games like Eye Spy. We had to play the "Sit Still Statue" game. It was exhausting work. We didn't have the luxury of handing them a smartphone and pretending they weren't there while they stared at a screen and forgot where they were.

And that's the biggest beef I have with electronics - that kids aren't really there. The kids in the Mothers Day restaurant were physically present, but they weren't really there emotionally or mentally. Their minds were trapped inside of their games and their videos. Their parents were paying for the experience of a nice meal, but the children weren't experiencing it at all. They were too trapped by technology.

The parents were so concerned that their children wouldn't know how to behave in that particular setting that they felt a need to distract them with inane entertainment. But the problem is that those children will never learn how to behave in that particular setting. Children learn important social cues and standards of conduct by observing the adults around them. When a child sees the way his father interacts with the waitstaff or the manner his mother uses her salad fork and engages in conversation, that is how they learn to do the same. They learn how others interact with their surroundings and that's how they learn. Those skills don't magically manifest themselves when a child turns five or ten or twenty. They are learned through observation and experience, both of which are powerful tools. The kids in this restaurant weren't observing or experiencing anything outside of their electronic screens. Their Mothers Day dinner became a lost opportunity.

So yes, parents. I know it's hard. I've been there, too. But remember that you aren't raising children. You're raising future adults. They won't always be able to lose themselves behind an electronic screen. Do the hard work now. Engage with your children. Make them engage with the world around them. They will be better people for it.They will one day have to interact with the real world.

Although the number of adults in the restaurant who were glued to their phone screens may suggest that I'm wrong.

As we were leaving, my oldest daughter told me, "Thanks for not ever letting us be assholes in restaurants, Mom." My children had been watching the other families, too.

"You didn't have time to be assholes," I told her. "We were too busy talking and being a family."

It must be hard to be a family when the youngest members are held prisoner by electronic devices. I should probably feel sorry for them.
Posted by ajoneswebb at 11:25 AM