I Am The Bad Mother At The Playground 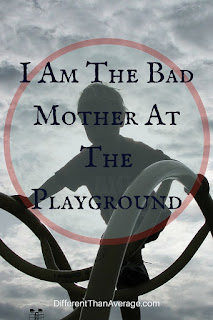 I have always been the mom at the playground all of the other moms hate. While those other mothers are hovering in helicopter patterns making certain their children follow the rules and play safely, I'm the slacker mom parked on a bench, nose buried deep in a book, while my children rip and roar their way across the playground equipment.

You know the kids at the park who climb on the outside of the play structures, who run up the stairs with large sticks in hand, the ones who climb their way up the slide? Those kids are mine. Mine are the kids sitting on top of the monkey bars. They are the ones shimmying up supportive columns and balancing on the safety rails. That kid squatting on top of the shade canopy? That one is mine. The one that refuses to go down the slide feet first, but instead rolls like a log, or barrels down head first, or pulls the next kid in line down with him? That one is mine, too.

I see the disapproving scowls of those other moms from where I hide in the pages of my book. I hear their loud voices as they instruct their children that they must come down the slide feet first on their bottoms because "those are the rules". I hear the obvious remarks about "safety first". I hear them command their sons to "put down the stick" as mine race past them screaming and dual wielding large branches. I sense the judgement and the ire. I know they think my children are wild, that they lack supervision, that they are being a horrible influence on their sweet little coddled children.

I sit on the bench out of design, not neglect. I'm watching them. Even from the depths of my book, my periscope is up. I'm not hovering and holding hands like the rest of the doting parents, but I'm ready to surface should the need arise. I'll be the first one on the scene in the event of blood or broken bones, but I will not make them follow arbitrary rules. I will not hover unnecessarily in attempts to prevent bruises or scrapes.

I don't want my children to be constrained by so many conformative boxes of thought and action, even if they are meant for safety. Security measures always inhibit freedom, but sometimes they do more harm than good.

It doesn't happen overnight, the scaling of walls. There are lots of failed attempts and scraped knees and almost-but-not-quite successes. But the triumph of finally perching on top and looking down instead of up at the watching parents is worth more to a child's self-esteem and confidence than any participation trophy. Self-confidence and ingenuity, problem solving and tenacity, bravery and caution are all things that should be learned on the playground, where the only dangers are bumps and bruises. Those qualities need to be developed by the children themselves, not instilled by parents quick to praise and offer help that isn't needed. Better for people to develop those qualities and skills as children than to struggle with them as adults.

So, scowl if you want when you see me sitting on the bench. I know you won't be inviting me back for play dates and park days. My children aren't in any real danger, though perhaps yours are, not from injuries but from a lack of confidence, originality, artistry, self-esteem. While mine might whimper occasionally over a few scrapes and contusions, at least they will know what they are capable of, at least they will know they have wings.
Posted by ajoneswebb at 12:56 PM

I let my kids barrel race. On horses. Living, breathing 800 pound mare and a stubborn little pony. T rode her first horse when she was 10 months old, not even walking. When they were 5 and 14 they were allowed to ride together up the road to a field. Without me. Alone. I stayed home on those days and read a book or mopped the floor (hahaha no I didn't mop the floor).

We made it through 20ish years with rough and tumble kids before one of them needed stitches. There were bumps, bruises and scars but no stitches for decades. Winning!

Kids are smarter than we sometimes give them credit. They can do a pretty good job of taking care of themselves.