Are Loyalty and Resistance to Change the Same Thing? - Saying Goodbye to the Family Minivan 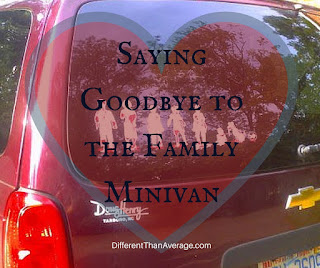 We once had a minivan. It was spacious and practical and thoroughly uncool.

For nine long years, that minivan was part of the family. It saw us through cramped car seats, then on to booster seats, and finally to epic Rock/Paper/Scissor battles for the privilege to ride shotgun. It was the first vehicle my son drove, the one that survived the little fender bender he caused in the parking lot of Waffle House on his sixteenth birthday. It was also the vehicle my daughter first tenuously steered with caution and trepidation, the one that helped her gain confidence to eventually venture out onto the highway.

That minivan carted home thousands of bags of groceries, family christmas trees, garden supplies, and new bicycles. It hauled this family and all of our luggage to upstate New York (to visit family), to Cleveland, Ohio (to visit friends), to Gatlinburg, Tennessee (for a karate tournament), to Stone Mountain, GA (where it almost drove away without one of our children). It toted camping gear and beach gear and karate gear and dirty laundry to the laundromat when our dryer croaked. It made family trips to the wilderness and to big cities, along back country roads and six-lane highways.

Along the way it acquired a new engine and picked up a few quirks. The passenger sliding door didn't close quite right unless shoved with muscular force. The air-conditioning quit working about two years ago, a great thing during muggy Southern summers ... very character-building. The defroster only worked when turned on full-blast. There was a crack in the windshield that kind of resembled a swan stretched out in flight, and an ant colony that had moved into the center console, making it's living on leftover car snacks and spilled or forgotten juice boxes.

But it was ours. Paid in full. Part of the family with all of its smudgy fingerprints and dog hair and stained floor mats and that petrified cheeseburger rammed between the seats.

Nine years is a long time for a rough family of six to maintain a vehicle, especially one that has been ridden hard and put away wet. The vehicle should have been let out to pasture (or something else more humane) long ago, but we don't give up easily in this family.

This weekend we finally succumbed and purchased a new vehicle. It's not a minivan (So now I can be the cool mom, right?). As we filled out the paperwork on our brand new "wagon" (It's really not any cooler, is it? Well, dang!) a pattern started to emerge.

How long have you owned your current vehicle? ...9 years.

How long have you been at your current residence? ...12 years

With each answer, the "product specialist" (just a non-threatening term for "car salesman") seemed genuinely surprised. Apparently people in this day and age don't stick with things quite so long, but remember, we've never been ones to give up easily.

But aren't they the same thing, differing faces of the same coin? It proves that you can put a positive or negative spin on just about anything.

We didn't want to give up on that van, so we pumped money into new engines and extensive transmission work, prolonging a life that just wanted to end. It cost us several hot North Carolina summers with no air conditioning and an extended hassle of impatient waiting after the keyless entry gave up the ghost. We paid for our loyalty with inconvenience after inconvenience after inconvenience. It makes me wonder if loyalty in such extreme circumstances is a virtue or a vice.

And now we have a shiny new (to us) vehicle with AC and power windows and cruise control that actually work. We have a view out the windshield unobscured by swan-like cracks snaking their way across our field of vision. We have doors that don't have to be slammed and a reliability that we haven't experienced in at least a handful of years. I wonder how long it will take us to release the nervous tension we've grown accustomed to holding as we cruise down the highway.

I should be happy, right?

And yet, I felt heavy and sad as we drove away from that car lot. As the back of that van with its "Proud Army Parent" and zombie family stickers across the back window grew smaller and smaller in the rear view, I realized that leaving behind that van was like closing a chapter, a chapter I'm not sure I'm ready to close, because I can still see those tiny faces smiling (and sometimes screaming) at me from their carseats in the back. I can still smell the sour juice boxes and the stale french fries. I can still hear laughter and silly songs and "Are we there yet?" questions. I can still see my son's face the first time he rode shotgun. I can still see my daughter's white knuckles the first time she gripped that steering wheel.

I am loyal to those things, committed to those values that are somehow expressed in those memories. There was joy and patience and strength and a large measure of grace there. It is those things that make me resistant to change, that make me want to hold on just a tiny bit longer.

The new vehicle doesn't yet feel like ours. It's like a new pair of shoes that hasn't yet been broken in - tight, unfamiliar, almost alien. I suppose it will take time to make new memories in this one. I'll admit that I'm slightly disappointed that I will never snap my children into car seats or pull over to soothe a crying child or sing "The Wheels on the Bus" an excruciating number of times in this new "wagon".

But doesn't the word "wagon" already make it sound like we are going on an adventure?
Posted by ajoneswebb at 11:47 AM