How Many Moments of Distraction Make A Bad Mother?

I wasn't going to write about the infamous Cincinnati gorilla incident that happened over the weekend.

"Opinions are like asses," my grandmother used to say. "Everybody's got one." And a lot of people have been seriously showing theirs, spewing hate and vitriol about crappy mothers, and the sanctity of gorilla lives, and bratty children all over the place. Like apes slinging their own poo.

I felt like everything that could be said about the incident had already been said.

Moms know. We've heard the Mission Impossible theme music that starts to play the instant we answer the phone, or close the bathroom door, or take too long blinking.

I wasn't going to write about the gorilla or the child or the mother. 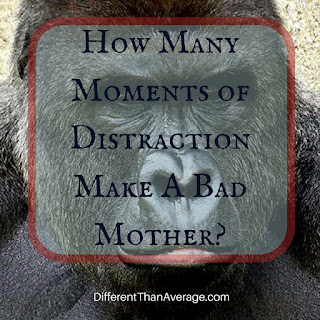 But there is actually a petition, as of this writing containing over 476,000 signatures, that demands the parents be held responsible for the gorilla's death. The signers of the petition demand an investigation by Child Protective Services "of the child's home environment in the interests of protecting the child and his siblings from further incidents of parental negligence that may result in serious bodily harm or even death."

Perhaps a list of more than 476,000 childless people, because I don't know a single mother who has watched the disturbing video of Harambe the Gorilla violently dragging that small child around the moat by his ankle who has not muttered words of thanks to whatever powers that may be, "There but for the grace of God go I."

Because I know I could have easily been standing in that mother's shoes. I've lost my children at the grocery store, the park, even my own front yard. While I'm thankful there weren't any large male silverbacks around to drag my lost wee ones away, it is the exact same attitude of inattention coupled with my children's spirit of adventure that led to me losing track of them. Perhaps the only difference is the location of our laxity.

And I am a good mother.

But I still lost track of my children.

Perhaps it is, ultimately the responsibility of the parents, because at the end of the day, it is our basic duty to keep them safe. And in that, this child's parents failed... if even just for one moment. But to cast a sweeping judgement of their parenting skills based on one single careless act is highly unfair.

One single moment, one manifestation of danger due to distraction, one moment of lowered guard, and the world wants to sweep in, declare the parents unfit, and possibly take away parental rights.

One moment of failure. One moment.

Meanwhile, also in Cincinnati, 19 juveniles were arrested at the Taste of Cincinnati event for charges ranging from curfew violations to fighting to discharging a firearm. That's right, children accused of firing shots into crowded areas. One 15 year-old arrested for assaulting an officer. Several others for fighting, and no one bats an eye. There is not one signature on one petition demanding that the parents be held responsible for their children terrorizing the general public. Not even one.

How many times must the parents of those Taste of Cincinnati juveniles have failed them? More than once if they are guilty of such dangerous and violent public displays. More than just one moment of distraction. Perhaps thousands of moments of distraction and inattention and lowered guard lead to that kind of behavior. These parents are guilty of neglect and endangerment stretched out over years.

And yet, we haven't even heard about it here in North Carolina. No petitions. No outrageous news stories. No accusations of neglect uttered at the grocery store or the coffee shop or social media news feeds. No judgement of parental skills. Where are the parenting experts and their assessments and convictions and decrees about unfit mothers? Why are they all so silent? If Zoo Mom is such a horrible parent, then certainly the parents of these teens are evil monsters. Why aren't we casting stones at them?

Perhaps it's because those mothers never took their sons to the zoo.