There Are Still Good Men, The Heroes in the Stanford Rape Case

There are a lot of men in the news this week.

First, there is Brock Allen Turner, the Stanford frat boy/Olympic hopeful/rich white kid that raped an unconscious woman behind some dumpsters after a raucous party and a night of binge-drinking. He was convicted by a jury of his peers of three felony counts of sexual assault. This is a boy who was caught red-handed in the act of rape, but still cried "Not responsible". "Alcohol made me do it!" "It was consensual!"

Then there is Judge Aaron Persky, the presiding justice in the Brock Allen Turner case, who ignored the three year minimum jail sentence, and instead handed down a much more lenient sentence with his all-powerful magisterial hand. Judge Persky felt Brock's good grades, athletic prowess, and family status balanced out his brutal attack of an unconscious woman. Six months is apparently harsh enough if you flash your Stanford alumni card and ask pretty please. Remorse? Judges these days don't need to see no stinkin' remorse, I mean.... boys will be boys. Right? A longer sentence would have had a "severe impact" on the Stanford athlete turned rapist. We certainly wouldn't want his egregious actions to have too great an impact on him.

Then there is Dan Turner, Brock's father, who felt his baby boy had already suffered enough. He's a good kid. Just look at his grades and his athleticism and his family's social standing. In Daddy's eyes, Little Brocky shouldn't serve any prison time at all. "His life will never be the one he dreamed about and worked so hard to achieve," whined Daddy in his letter to the court. "That is a steep price to pay for 20 minutes of action out of his 20 plus years of life." 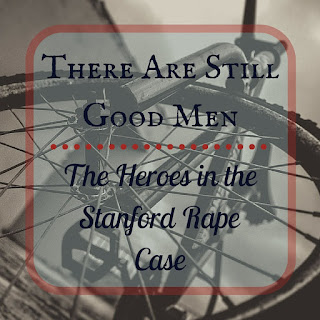 Yes, this week has been one long string of men behaving badly. This story is enough to make even the manliest of men throw up their hands and scream "Men are pigs!"

Yes, Virginia, there is rape culture. Even the most skeptical among us kind of have to admit that after watching this dog and pony show.

There are two other men in this story.

Carl-Fredrik Arndt and Peter Jonnson were riding their bicycles, on their way to their own Stanford party, when they saw Brock Turner behind a dumpster moving on top of his very still victim. They could have rolled their eyes, chalked it up to alcohol, minded their own business and biked away to their own party.

They confronted Brock. When he tried to run, they tackled him and held him down until police arrived.

By all apparent measures, Arndt and Jonnson should have identified with Brock. Afterall, they were Stanford students on their way to their own party, both white and male and privileged. In a Society ruled by rape culture, they should have ridden on laughing together about how "she must have asked for it" or "look at how she's dressed" or "that's what she gets for drinking so much."

But instead they felt empathy for the victim, not Brock. They saw a human being in need, unconscious, covered in dirt and pine needles, mostly naked and vulnerable, and they set aside their own safety in order to help her. The scene was so disturbing to these two men that one of them actually cried as he gave his account of events to the police. It wasn't Brock, the promising young white male with whom they should have identified that caused them concern.  There were no slaps on the shoulder or high fives and fist bumps or "Go gettum, Bro" encouragement.

Instead they felt empathy for his victim. A woman they knew was a person and not a piece of meat.

There are still good men in this world.

Because boys will be boys. And while some little boys do like to lurk behind dumpsters, more boys dream of superhero capes. I want my boys to be the kind that wear capes. Or at least the kind of boys that ride bicycles and aren't afraid to stop and help another human being in need.

Even when that human being is a drunk, unconscious woman.
Posted by ajoneswebb at 11:51 AM

Amazing article - thank you for exalting the true heroes in all this.