It's just over a week until doomsday, or as more optimistic people call it "election day." The past few weeks have been a swarm of negative political ads and cyber screamfests as both candidates' camps attempt to convince me that the only hope we have as a country is for their opponent to lose. No messages of real hope or promise or optimism are being offered. Instead, we're hearing about the doom and death and destruction that will commence the minute the other guy (I sincerely mean "guy" in its gender neutral form) is elected.

Everyone is too busy trying to persuade the undecided, exasperated, and generally demoralized voter that their candidate is at least slightly less evil than their opponent. No one seems concerned with the fact that their own candidate is, in fact, evil themselves. The only chance for this country's survival, and perhaps the world's, is for everyone to not vote for the other candidate. South Park had it right, this election is basically average citizens deciding between a giant douche and a turd sandwich. 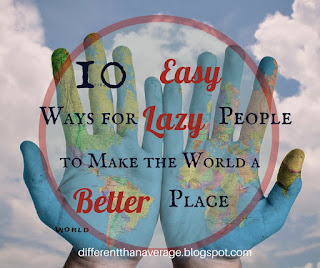 But there is hope for this country. Maybe I'm being overly optimistic, which may be a tad bit uncharacteristic of me, but I don't think its too late. I think there are plenty of ways to make this world a better place, and none of them even involve voting for evil. Actually, none of them involve voting at all. In fact, they all require very little effort. There are real things even lazy people can do.

Maybe it doesn't take politicians and public policy to save the world. Maybe it takes average everyday people deciding to be decent human beings to save us in the end.

Here are a few easy ways to make this dirt ball we're spinning around on a better place. This isn't difficult, people. Let's try it. It certainly can't make things any worse than they already are.

This is a list for lazy people, feel free to try harder if you feel motivated to do so.

2. Say Thank You. When someone holds the door for you, just give them a simple "thank you." It's what decent human beings do. Try to be at least superficially grateful. It's not going to kill you to show a little kindness and gratitude when someone else is doing the same. Bonus points if you smile and make eye contact.

3. Return your shopping cart. The road to Hell is paved with abandoned shopping carts. It isn't going to kill you to walk a few extra steps to push the cart into the cart return. Leaving it in the parking lot is just evil, and aren't we voting for enough of that? The thing has wheels so it's not like it takes a lot of physical effort. Leaving a stranded cart blocking the only available parking space within 150 yards of the door is not only rude, it's also pretty un-American.

4. Don't let your kids run wild.  I'm all for allowing kids to be kids, but standing on the table Irish dancing at Golden Corral or knocking down innocent shoppers while playing a one man game of hide-and-seek in the racks at Target is a little extreme.  Expecting kids to behave in socially appropriate ways in public is the first step in ensuring they become adults who behave in socially appropriate ways in public. I'm guessing some of our presidential candidates could have used a little more home training.

5. Look up from your cell phone. I mean, especially when you are ordering a meal or checking out at the grocery store or really anywhere that you are encountering a human being. I realize that your text messages and twitter accounts and funny cat memes are oh-so-very important, but just look up from your electronic tether and actually make eye contact with that human being who is serving you. They are offering you their time and attention (even if their employer is buying it for super cheap), the least you can do is offer them yours.  I promise that it is more than okay for you to treat human beings in the customer service field as actual people. Bonus points if you actually smile.

6. Use your turn signal. Maybe you're bopping along to your favorite song cranked up loud on your car stereo, too distracted to remember that there are other drivers around.  Or maybe you're busy with the cell phone call from your best friend while she complains about the hooker shoes So-And-So wore to the club last night. But it only takes a couple of extra synaptic sparks to hit that handy lever on your steering column and communicate to surrounding drivers and pedestrians your intentions to maneuver your 4,000 pound speeding metal death machine.  Most of us haven't mastered the art of telepathic communication, and body language is lost on us when it is masked behind the wheel of a moving vehicle.  So the turn signal is a super polite way to communicate with your fellow drivers and cut down on incidents of road rage.  To not signal before a turn or lane change is just plain rude. Besides, I bet the personal drivers of presidential candidates don't use turn signals. Do you want to be like a Giant Douche or a Turd Sandwich? I didn't think so.

7. Compliment someone. It's easy to be mean and confrontational when the people who are supposed to be role models are doing it, but we don't have to be like the presidential candidates. Tell someone how much you like their haircut, or the shoes their wearing, or how they aren't pestering you about who you're going to vote for in the election. It's okay to make it random, but make it sincere. Take a cue from Canada and say something nice.

8. Shop local. If you're feeling grumpy about corporate greed and how big business owns our politicians, do something about it. Skip the big box retailers and shop with the little guy. When you purchase goods and services from a local business, you aren't lining the pockets of multi-million dollar companies who care little about you but still spend your money to influence public policy in their favor. When you buy local, you're paying for someone's kid's braces or guitar lessons or new soccer cleats. It's a beautiful thing to invest in the lives of people you call neighbors.

9. Turn off the TV. Think of all the extra political ad-free time you'll have to do something productive (or not productive... I won't judge). The world needs people who can think for themselves. It's hard to be that kind of person when there is a constant stream of programming telling you what to think, who to be, and who to be mad at. Besides, what better way to stick it to the two evil candidates than to NOT watch all of the political ads they spent tons of money on just to call each other names and point fingers? We don't have to be their audience.

10. Give stuff away. I'm not talking about free college tuition or political favors, either. That stuff that's just laying around your house not being used, someone else could probably use it. Go through your closet, box up anything that you haven't used in over a year (especially your clothes), anything that doesn't have sentimental value, and just give it to someone. You can donate it to charity or give it to a friend, it doesn't matter. You'll feel freer without the clutter and someone else will be putting something that was just taking up space to good use.

Let's do this, people! A little bit more action like this from little people like you and me, and it won't matter who comes out on top on November 8.

At least that's what I have to keep telling myself to maintain some semblance of sanity.

Posted by ajoneswebb at 3:19 PM

Yes!! Thank you so much for this post. Truth and humor and we can do these things people!