This is Armageddon - College Students Cry and Why We're All Doomed

The presidential election is finally over, for better or for worse. I'd like to say that I'm relieved because my life could use a lot fewer political advertisements. By Tuesday afternoon I had a stack of political mail fliers that would put the old Sears and Roebuck catalogue to shame. My youngest had memorized most of the television ads and could recite them with frightening accuracy, including facial expressions and voice inflection. She's a scary kid.

Our family tucked in tight on election night. I spent the night stress drinking and wallowing in despair. My son checked the kitchen to be certain we were well stocked with milk and bread. "This is a shitstorm, not a snowstorm!" my oldest daughter fussed as she rolled her eyes in typical teen exasperation.

My youngest daughter was the only one who felt anything akin to excitement. She had a coloring sheet of the United States so she could fill in all the electoral votes as the results were announced. At thirteen, she is currently disappointed in her lack of opportunities to use crayons, so her coloring sheet was a thrilling chance to put her long-neglected red and blue Crayolas to use.

My oldest made a phone call home after jumping from airplanes and doing other badass military stuff. "Do we have a new supreme overlord yet?" "No... not yet," I told him.

At 1:30 in the morning I finally said, "Enough is enough!" (referring to the election coverage, not my wine consumption) and sent everyone to bed. It was starting to look like my greatest fear was coming to fruition. One of these two candidates was actually going to win the election.

And win one of them did. I'm sorry for the spoiler if you haven't been keeping up with the final season of America... but Trump won. (I know... I was shocked, too.)

I checked the kitchen to make certain we had plenty of bread and milk on hand for the ensuing political apocalypse. I wasn't certain what Armageddon would actually look like, but I figured bread and milk might be somehow important. But surprisingly, Armageddon looked like a fairly normal day. People went to work, dropped the kids off at daycare, folded laundry. The world didn't stop turning after all. 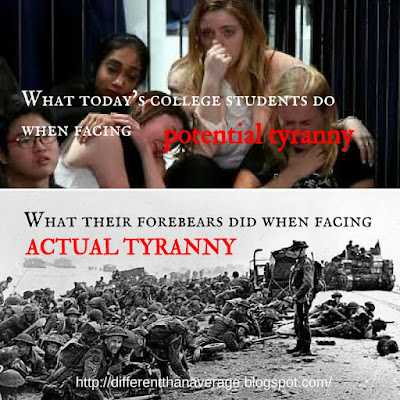 That is... unless you are a college student.

Many universities across the country cancelled classes on Wednesday and offered counseling to help their students cope with the trauma of the election results. Exams were postponed or made optional. Not only that, but therapy dogs, playdough, and crayons were made available in attempts to make the precious snowflakes feel better. And Cornell University actually hosted a "cry-in" to mourn election results, complete with staff handing out tissues and hot chocolate.

I understand that the results of this election have produced a lot of feelings of misery, discouragement, and out-right fear for the future. I totally acknowledge the gloom that has settled over portions of the population like yesterday's misty weather (Totally appropriate Armageddon weather. Thanks, Mother Nature). I get that things may seem bleak and confusing and frightening. I'm confused, too. I don't know whether to be ridiculously happy that Clinton didn't win or angrily upset that Trump did. Things are complicated right now.

But the images of despondent young adults weeping hopelessly while curled on the floor in the fetal position is too much. These are our future leaders we're talking about here. Are they just going to roll over, weep, and take whatever the government decides to dish out? If so, there truly is no hope for us.

Here's the deal, weepy tantrum-throwing young people. You are too old to behave this way. You're basically adults now. You don't get to scream and cry when you don't get your way. That's what two year-olds do, not the future of America. If you don't like the country you're inheriting, you get up off the floor, wipe the snot off your face, put on your big-girl panties, or grow a pair, or whatever gender-inclusive euphemism you choose, and you do something about it.

Sure, Trump might be the most disgusting incarnation of evil you could imagine. But Hillary was no sunshiny cupcake either. Stop calling your neighbors nasty names and accusing them of being hateful bigots. Most people left the voting booth (regardless of which candidate's name they marked with an X) feeling a mixture of guilt and shame, like they had just been complicit in spreading some nasty venereal disease. Very few people emerged feeling full of hope and progress and optimism. Keep that in mind while you're screaming and ranting at friends and family and members of your community who may have voted differently than you.

Besides, if Trump does turn out to be the tyrant you fear him to be, we're all going to need to work together to make things right again. So stop alienating your potential allies. Most people are basically good human beings with good intentions doing the best with what they've got in the moment. Just because they disagree with you, doesn't make them thoroughly wicked or vile... and it doesn't mean they hate you, either.

Perhaps all of these tears and whining and unwillingness to cope are because of too many years of soccer and t-ball, where trophies were handed out for just showing up and no one kept score. Maybe that's why you feel like maybe you should get the president you want because you voted. You showed up. You participated. That's not how the real world works. People lose. Teams lose. Sometimes even when it seems like they deserved to win.

But you know what you do when you lose? Sure, you can go cry in the locker room or run off pouting or angrily take your ball and leave, but what does that accomplish? If you want to be successful, you have to work so hard that you ache. You have to be tired and sore and you have to get dirty. If you want things to change, you have to make them change.

If you don't like where this country is headed, then do something about it. And you don't even have to wait four years to vote for it. We don't have to be victims of our government, even the one we've elected. There's more to social change than stepping into a polling booth. That's just one aspect. I promise you aren't helpless babies, no matter how our institutions of higher learning may be treating you. The fastest way out of despair is action.

Trump is only one person, although a person who will soon be handed a large amount of power. If we are this afraid of the wrong person being president, that is a hint that maybe the president . . . any president . . .even if it's the person you voted for, has way too much power. No one should have that much capacity for destruction, oppression, or domination, even if they have a pen and a phone.

Do you know what your forebears did when faced with cruelty and heinous evil? Do you know what they did when they confronted tyranny? They stormed the beaches of Normandy. They wielded bayonets at Yorktown. They waded through rice paddies in Vietnam. They didn't waste time coloring mandalas or squishing playdough or crying inconsolably on the floor. You should all be ashamed of yourselves. You come from better stock.

I'm not saying it's time to take up literal arms, but even virtual arms or symbolic arms or metaphorical arms would be better than this pansy-ass whimpering wuss fest happening on campuses of higher learning. Your parents are paying too much for your education to waste it on skipping class to do coloring sheets, even if you are feeling despondent.

Remember, it is better to light a candle than curse the darkness. Even when it seems really, really dark.

And speaking of dark... it's okay to do your crying there. But let's show the world a braver face, shall we?