Did Racism and Hate Really Win the Election?

Remember how the internet went crazy changing profile pictures to French flags after... I don't remember, I think something happened in France? And remember all of those hashtags of support when those school girls from somewhere had something bad happen to them? Well, apparently it's time to jump on the newest bandwagon of slacktivism. 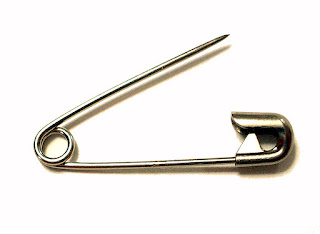 In the wake of what for many Americans was a rather upsetting presidential election, people are doing something about it, at least doing something that requires little time or involvement or inconvenience. All over college campuses and on subways in big cities, people are donning safety pins. It's a small simple gesture, but it's trending on social media, so it must be important.

In the wake of what has been a divisive political campaign season, many people are declaring themselves allies to America's marginalized groups. Donning a simple safety pin is claimed to be an act of unity and solidarity, a way to show that the pinned individual is "safe" for the teeming masses of the country's demeaned, deprecated, and criticized.

While the gesture may have begun as a display of kindness, it seems to have run rampant, becoming a way for the left to offer themselves a hearty pat on the back, a way to wear their self-righteousness on their sleeve... or at least on their lapel.

The kinds of marginalized people that make the acceptable list for safety-pin wearing slacktivists are women, blacks, latinos, muslims, and anyone who slaps a gender non-conforming label on themselves. But in their fervor to be helpful and inclusive and peaceful and sunshiny, they are forgetting a very important group of marginalized citizens.

I live in small town eastern North Carolina (I didn't vote for Trump, so don't come looking for me), in a county that has 25.3 percent of its citizens living in poverty. This is a rural county. Most people don't come to visit, it's just a necessary evil you drive through on the way to the beach. But if you had taken the time to pull off the highway, enjoy our scenic byways lined with cotton fields and hog farms, you would have seen quite a few Trump/Pence yard signs.

Earlier this fall, well before the election, my family took a weekend trip to the gorgeous North Carolina mountains. While winding through rural places where you can almost hear banjo music if you listen real hard, we saw even more Trump/Pence signs, some of them billboard-sized. They were planted in rocky unkempt yards next to rusty old pickups, plastic lawn furniture, and free-roaming poultry.

While the results from November 8th left a lot of people baffled and confused, if you take a good look at the county-by-county election map, you'll see an obvious trend. Places with large concentrations of population, i.e. large cities, almost unanimously voted for Hillary Clinton, very small pockets of blue when compared to the red that stretched across the country like a spreading bloodstain. Rural America showed up to vote for Donald Trump in uncharacteristic droves.

Progressive minds are pointing fingers from their pity parties and safe spaces, blaming Trump's surprising win on racism, ignorance, and closed-minded country bumpkins. You know, the rednecks who lack culture and education and intelligence? That's the only logical reason that someone so evil and despicable and inhumanly orange could possibly have won the presidency, right?

By and large, it wasn't racism that voted for Donald Trump. It wasn't hate, either. It was desperation.

If you have a few minutes on your next drive to the beach, pull off the highway and take the backroads. Drive through small town America. Take a look at the boarded up storefronts and the empty factories. Rural America is on its death bed.

Poverty isn't only an inner city problem. Those redneck country bumpkins that the left disdains actually suffer from higher rates of poverty than urban areas. They are also more likely to live in extreme poverty, to suffer from it longer, and to have limited access to services such as clinics and hospitals and social services and even soup kitchens. Maybe that's why rural Americans have a lower life expectancy and suffer from higher rates of depression.  While the scenery is sometimes nice, life in rural America is no metaphorical walk in the park. Life is hard and only getting harder. All while rural America has largely been forgotten.

In mid October, Donald Trump held a rally in Fletcher, North Carolina. Fletcher, NC isn't the kind of bustling political hub that tends to generate a lot of interest from presidential candidates. The town only has a population of 7,243 people. I've never been to Fletcher, but I hear they have at least one stop light. Thousands of people packed the agricultural center there to hear him speak. That's thousands of people, perhaps more people than actually live in Fletcher.

While the other side was busy framing the average rural voter as hateful, useless, or "Deplorable", Trump was reaching out to rural America. Trump spoke about jobs leaving the country and moving overseas, a subject that has been felt intensely by people in towns filled with boarded up buildings and brownfields.

For ill or for better, Trump seemed to reach a hand out to rural America and promise to help them.

While celebrities and politicians and college campuses have hugged and welcomed and fought for the rights of blacks and hispanics, women and muslims, and everyone on the LGBTQ spectrum, rural America has been actively marginalized by them. With large paintbrushes of progressive thought, rural Americans have been trivialized as hateful, illiterate, frightening, useless. Their votes shouldn't even count. They have been silenced, told repeatedly that they were nothing more than intolerant racists and misogynists.

And even now, after they sent their voices screaming in bright red from the voting booths, the self-satisfying safety pin wearing left, who claim tolerance and acceptance, are circulating petitions bent on upsetting the electoral college in their favor, ultimately silencing millions of desperate voting voices once and for all. For the good of the country, of course.

For good or for ill, millions of Americans voted for Trump. It was an urgent cry for change, a plea to be heard, an attempt to matter to the powers that be. Instead of trying to silence them, perhaps we should be listening. Maybe they aren't ignorant. Maybe they actually have something to say. Does your safety pin include them?

If you aren't a safe place for them, stop claiming to be a safe place for the marginalized. Because I contend there is no part of the population more criticized and disparaged than the backwoods, small town, hard-working citizens of this country. Their lives matter, too. Even if it isn't catchy or politically correct.

No one likes to be ignored. How many times do you slap a dog before that dog lunges at you with a vicious backlash? Unfortunately, this time the vicious backlash came in the form of Donald Trump.

Maybe we should have listened sooner.

And take off that damned safety pin. You look ridiculous.
Posted by ajoneswebb at 2:48 PM

Thank you for writing this. It is the more difficult perspective to accept but no less valuable, and truly eye-opening. It is the voice of desperation, or A voice of desperation as there are various ones we need to listen to and converse with. Each bears legitimacy and needs to be addressed if we are to move forward as a unified society. I agree with your perspective on that. However, I must express that the safety pin may not altogether be simply ridiculous. It sometimes spells out survival for some people in this environment of hate that PE Trump nurtures. Sadly.