Losing Loved Ones and Car Keys

I can't even count how many times I've heard that platitude recently. It has been written in flowing script across sympathy cards, whispered by family, friends, and acquaintances with kind eyes, posted in digital form on my social media platforms. It's the go-to sentiment when people really don't know what else to say to relatives of the dead.

I "lost" my dad three months ago.

It's damaging verbiage, the language of loss. Because it isn't as if I lost my keys, or my wallet, or last month's bank statement. It wasn't an act of carelessness on my part. It's not like I set him down somewhere and forgot where I put him. It isn't even like that time I lost my daughter in Target, where I was frantic and panicky, in spite of the fact that she was safely reading in the book section.

I didn't lose my father. His death wasn't caused by any sort of error or personal shortcoming. It wasn't like losing a football game, where if I'd only played better I might have won. "Lose" is an action verb. It hints at responsibility. As if taking a different course might have changed the destination.

And by calling his death a "loss" it implies that I might be able to find him if I just thoroughly check between the couch cushions. If I were just more vigilant. Maybe if I tried harder, I could turn this lost into a found.

I didn't lose my father. He died. 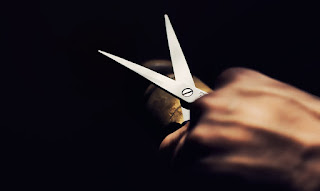 But we are afraid of death. So much so that we sweep the word from our vocabulary. Instead of acknowledging death and its power, we trade reality for empty euphemisms about being "in a better place". By sugar-coating our expressions of death and grieving, all we do is perpetuate Society's phobias about death and dying. It is social decorum that keeps us from talking about death as a reality.

Maybe if we don't use the word, it's like it never really happened.

But it did. And the only thing worse than hearing the empty pity in the sorry-for-your-loss bromide is encountering the people who know but don't acknowledge. They want to avoid discomfort so they pretend they can't see the gaping hole in my soul. But it feels like they are actively denying that my father ever lived, that he ever meant something to me, that we can all just carry on as if nothing significant happened.

Our culture really sucks at coping with and acknowledging death.

We need better words. But we also need better ways of dealing with grief. My world is never going to be the same no matter how much we pretend, no matter how we try to act like life has somehow returned to normal. No amount of fluffy language is going to change that.

When my father first died, I fought the urge to slice deep grooves in the flesh of my arms, to somehow do something concrete and drastic with the emotional pain I was experiencing. Instead, I chopped off my hair. I cut it shorter than it has ever been, right up to the nape of my neck. It wasn't quite the drastic measure I desired, but it did seem a lot less destructive than knocking over a liquor store or punching holes in plaster walls.

My hair is growing back now. I don't think I'm ready to feel normal yet. I'll probably chop it short again.

I once lost my car keys at McDonald's. I frantically dug through my pants pockets in search of them. My oldest son dug through the soggy garbage and half-eaten burgers of the McDonald's trash can. The kids and I looked under tables and in the parking lot, thinking that the keys had been dropped somewhere when I wasn't paying attention. I was certain that I had lost those keys for good. We were stranded without them. Stuck alone in a dark fast food parking lot. I dialed my husband in tears to inform him of my loss, and just as he answered the phone, I found those keys.

They had been in my coat pocket the whole time. They were never really lost.

There's probably some grand existential message in that story. Maybe I'll think on it some more when my hair grows back.