Why the Yale Hunger Strike Makes Me Feel Old

I was beginning to think I was getting old. I figured I was turning into an old lady partially because I can no longer make out the letters on a restaurant menu without my reading glasses. There's also the embarrassing fact that I constantly have to ask the kids how to work the darned TV remote.

But mostly, I was feeling rather old because I just don't understand young people anymore.

You see, just a little over a week ago, eight Yale graduate students went on a hunger strike. They've parked themselves in front of the home of the university president in mild 65 degree weather to suffer for a cause. It sounds noble. Surely these eight brave students will go down in history right alongside other noble heroes of the hunger strike like Ghandi against caste system, Alice Paul for women's suffrage, and Soviet dissident Andrei Sakharov.

This has got to be serious stuff right?

But do you know what human injustice they are protesting? Their sweet $30,000 a year teaching stipend (for teaching about 14 hours a week), free health care, and a tuition-free ride to one of the world's most prestigious universities. The onerous conditions under which these poor privileged graduate students live makes me shudder in horror.

Back in my day, we had to work our way through college...five miles through the snow. Uphill both ways.

But then their handy little protest pamphlet hit the internet airwaves. It isn't a REAL hunger strike. It's only a symbolic one. If they get too deliriously hungry, they can just leave to grab a burger (although they would probably prefer some tofu, but I might be jumping to grand conclusions). Someone else will just hop in and take their place. It's like a tag team hunger strike. That way no one has to be too uncomfortable.

And that is why I was almost convinced that I am old. I read this news story and I just couldn't relate. And when you can't relate to people in their youth, when they annoy you, when they mostly bother and irritate you, you've become a crotchety old curmudgeon.

I must be old because all I really want to do is smack those coddled, entitled, idiotic whippersnappers upside the head. Maybe it would knock some sense into them.

What is wrong with young people these days?

Older generations have traditionally scorned the ideas and attitudes of the young. Look at how our grandparents treated our hippie parents. It's tradition that the mature generation misunderstand and even scorn the simplistic idealism of the younger. It's the way the wheel turns.

Is it because young people are immature? Or that they just have a radical utopian vision? Or is it because the older generation understands life in a way that the young can't for lack of experience?

Or maybe those are all the same thing. 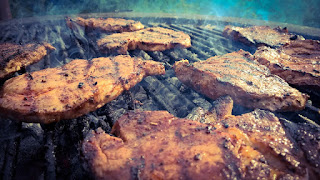 See? I'm becoming overly cynical, too. Another sign that I'll soon be taking up knitting and needing a walker. When I can no longer empathize or connect with today's youth, I figure I've just become an old crab... especially when I start using the word "whippersnapper".

But then I discovered that some of the protestors' fellow college students hosted a barbecue, complete with delicious-smelling beef ribs, baked beans, and corn on the cob. And they parked their barbecue directly downwind from the symbolic hunger strike so the hungry protestors could enjoy the smell of grilling meat.

And I thought, "Now that is a beautiful gesture."

That's when I realized I was okay. My kids are going to have to wait on getting me that room at the nursing home.Maybe I'm not getting old at all. There might still be a little spring left in my step after all.

Because this is young student action that I can totally relate to, maybe even support. Passive aggressive trolling.

I'm full of all kinds of warm fuzzy empathy for these young Yale barbecuers.

Ah, youth. Somebody pass me some barbecue.
Posted by ajoneswebb at 2:35 PM