What This Mother Thinks of the "Mother of All Bombs"

Last year on Mother's Day, my oldest child was several hundred miles away. I got a lovely letter from Fort Benning, Georgia the day before Mother's Day. On the back, he had traced an outline of his hand.

His hands are huge now. Man-sized hands. My entire hand fit inside the outline of his. But I have his toddler hand prints, stamped in bright-blue acrylic paint inside of an old Mother's Day card, that prove they once fit entirely inside of mine.

This Mother's Day I'm lucky. He's stationed just 2 hours away at Fort Bragg, where he is a proud member of the 82nd Airborne Division, the primary fighting arm of the XVIII Airborne Corps. Chances are good that he will find his way home this weekend and, if I can tear him away from his girlfriend long enough, I might just get to eat lunch with him.

I realize that I am blessed. There are plenty of military mothers who may only get a hurried phone call from their sons and daughters who are stationed thousands of miles away.

I still have a hard time reconciling the 6'2" man in combat boots, who walks toward me with purpose and an infantry swagger ,with the memory images of my son in a Thomas the Tank Engine T-shirt, strapped inside of his booster seat, happily tossing pieces of his cheese toast to the family dog. That dog loved him almost as much as I do.

We buried that dog in my grandmother's flower bed almost 10 years ago.

This week, the American people are all kinds of pissed and upset and preoccupied with Trump's firing of FBI director, James Comey. Meanwhile, the fact that Trump is most likely planning to send another 5,000 U.S. troops to Afghanistan is mostly being ignored.

My son was five years old when the war in Afghanistan began.

He was busy tossing cheese toast to the family dog. 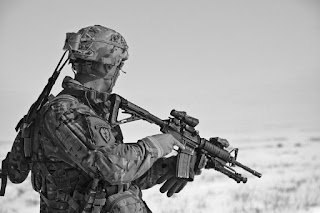 Since then, more than 2,200 Americans have been killed and another 20,000 injured fighting in Afghanistan. It has been the costliest and longest war the United States has ever been involved in. And yet, we really haven't accomplished much. So it seems logical to send more troops, right?

While large portions of the population have conveniently forgotten about the conflict in Afghanistan because it is old news, I am painfully aware. I suspect a lot of military mothers keep one finger on the pulse of the Middle East. Because our precious sons and daughters aren't tossing cheese toast anymore.


Just a few weeks ago, the U.S. military tossed "The Mother of All Bombs" on Afghanistan. MOAB actually stands for "Massive Ordinance Air Blast." But hey... Mother's Day is right around the corner and we need to be festive.

Critics of the move have asked the rhetorical question, "Would a mother ever conduct such an act of violence?" 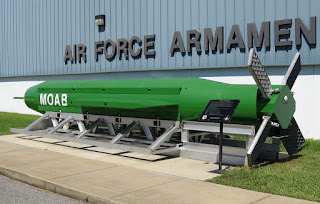 MOAB is a very destructive weapon, but it is precise. The 22,000-pound bomb leaves a large footprint of destruction, but that destruction isn't random. It is capable of hitting very distinct targets. The MOAB that was tossed on Afghanistan targeted a system of tunnels and caves that ISIS fighters used to move around freely, making it easier for them to target U.S. military advisers and Afghan forces in the area.

Just a week before the "Mother of All Bombs" was unleashed, Staff Sergeant Mark De Alencar, a Green Beret and a father of five, was killed in the same area.

The MOAB struck the epicenter of ISIS operations and cleared the imminent threat so that Special Forces could go in with lower risk. The use of a MOAB meant Afghan and U.S. troops, which launched a mission in that region in March, did not have to fight in the areas where they were at a distinct disadvantage.

That sounds exactly like what a mother would do - set forth all the power of Heaven and Hell to keep her child from harm.

To them they aren't patriots. They are pawns in political games of power.

I watch the chess game with trepidation, holding my breath as our sons get moved around the chess board by egomaniacal world leaders. Some promised to send them all home and then yelled "Sike!" (Cough, cough... Obama), and others frighten and frustrate me in entirely different ways (I really have to question the decision making abilities of anyone with such a horrible combover).

While I question whether our troops belong in Afghanistan at all, if they have to be there... send in the mothers first, whether in bomb form or otherwise. Drop the "Mother of All Bombs" like so many tiny pieces of cheese toast all over the kitchen floor. Clear the way for our sons and daughters to go in so all that's left in their way is empty sand.

Because while I would love to see peace in our time, if it comes down to my child or yours... I would tear yours apart with my own two hands.