The Problem with Women Infantrymen

On Friday, the United States Army graduated 18 women from the very first gender-integrated infantry basic training. This comes a full year after the Army lifted the ban on women serving in the armor and infantry branches, what many would consider the primary fighting arms of the US Army.

These 18 women are the first to earn blue cords and become junior enlisted female infantrymen.


I have mixed feelings about this.

I'm fairly certain that there are going to be people who come out of the woodwork like swarming cockroaches to tell me how behind the times I am. I'll be called a misogynist and a sexist and probably closed-minded. Internet bullies will shout about me being old fashioned and a product of the patriarchy.

I'm okay with that.

But before we go any further, let me just point out that I've always been one to bust through gender stereotypes. I can accurately shoot high-powered weapons without flinching. I've field dressed my own game and dragged my own deer over mountainous terrain. I can bait a hook, clean a fish, build a campfire, and skin a squirrel.

I'm also no stranger to combat sports. I hold the rank of second degree black belt, and I'm not afraid to scrap with the guys, even the ones who outweigh me and can out-muscle me. I can take a punch as well as deliver one, and I've currently got some badass bruises to prove it.

So there is a part of me that is cheering on these eighteen women, because they've completed some amazingly difficult training in an area that isn't exactly welcoming to anything feminine. I kinda want to fist bump them and acknowledge their strength, bravery, and general badassery.

I have a son in the infantry.

And everyday I pray that all 6 foot 2 inches and 220 pounds of him stays safe.

While all 18 of those female infantrymen have passed stringent qualifying tests of marksmanship and skill. They are physically women. Most of them are under 5'4" and weigh somewhere in the 100 to 120 pound range.

The Army has already lowered it's minimum requirements for Basic Training PFT in order to even the playing field and ensure women can actually make it into the Army.  As it stands, women are required to perform less than half the push-ups expected of their male peers and are given more than an extra three minutes to finish their two-mile run.

That's fine.  There are plenty of military positions for females where their weaker physical prowess is NOT an issue.  Shoot.  There are even combat positions where a woman's inferior physical strength might not be an issue. Flying planes and helicopters or operating other equipment, even serving as snipers leaves their typically weaker build out of the equation.

But this is the infantry. Some of these women, after they've completed Airborne training at Fort Benning, will be off to Fort Bragg where they will serve alongside my son. These women will be serving alongside men, potentially in fire fights and hand-to-hand situations, because in a fit of blind feminism and political correctness, we've turned our military fighting force into a freakin' social experiment. And it isn't the brand new physically fit, stereotype-breaking women infantrymen that will pay for it, either. It's the men whose ranks they are about to enter.

It isn't a matter of whether these women can handle the emotional stress of combat. It isn't about their skills with weaponry or warfare. It isn't about whether they are capable of earning the respect of male soldiers. It isn't even about how they will mange peeing in the field or dealing with Aunt Flo.

Under most circumstances, their gender means absolutely nothing.

As a mother, the thought of my son being injured in a fire fight with his only chance of survival being that one of his fellow soldiers carry his injured 6'2" 220 pound body, dressed in heavy combat gear, out of harm's way... that the only soldier available to perform that duty might be a 5'4" 120 pound female who made it through OSUT because the physical requirements were lowered for her gender to make things more progressive and politically correct...  that is something I cannot emotionally handle. 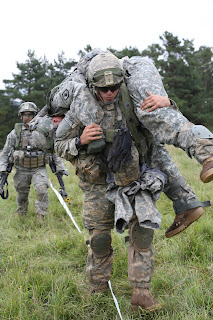 At the end of the day, does it really matter if she can shoot, or clear a room, or march in formation, or recite the Infantryman's Creed? Does any of that matter if she would have to abandon an injured soldier on the battlefield because she is physically incapable of getting him to safety?

It's not about being fair.  It's not about how hard women work or train. It's not even about whether women can handle the emotional or mental strain of intense combat situations.
Because a woman, even a woman in top physical form, is still a woman. And a small 5-foot tall woman may not be capable of supporting her comrades-in-arms in necessary, life-saving ways.  We can't afford to sacrifice the safety of our sons for the sake of some feminist social agenda. Maybe the US military isn't the place for complete gender integration. At least not until we make the physical standards. at least for every combat MOS, the same for both men and women.
Because that's just not "fair" to the men who have to count on those women infantrymen, sometimes for their very lives.

Perhaps there is a reason the term is "infantrymen" and not "infantrypersons." Or maybe I really am just a product of the patriarchy. But just because we all have equal rights doesn't mean we are all created with equal abilities.

Posted by ajoneswebb at 1:17 PM