On Monday and Wednesday afternoons, just before dinner, I teach a karate class. It is a small class of rambunctious 4 and 5 year-olds that keeps me on my toes and often stretches my patience. But it is usually the highlight of my week.

I've been teaching this class of small children for two years, and it has been overwhelmingly populated by boys. I don't know if it is because more boys want to learn to punch and kick with skill and authority, while maybe their female peers are wanting to dress in pink tutus and learn to pirouette. Maybe it's because the mothers of boys desperately want an activity that will burn off some of the excess energy that drives their sons to climb walls, knock over furniture, and ride the cat.

I don't know. But for whatever reason, until very recently, my class has been almost entirely boys.

And then in walked one little girl and like a dropped domino two more followed her. Now there are three girls forming a minority at the end of the class line-up.

I don't treat them any differently than I do the boys. They get high fives when they succeed, are encouraged when they don't, and told to "suck it up" when they get hurt. As far as I'm concerned, there is no gender on the training mat.

Last week, we were working on forward rolls, a skill that the little boys who've been around a while can mostly execute with an amount of clumsy confidence. But one of the little boys seemed concerned when it was the newest girl's turn.

As if to dismiss her or excuse her potential failure. Do even small boys expect less of their female peers?

Three little words from a boy who has yet to reach 3 and 1/2 feet tall. And yet the weight of them fell heavy on my soul.

And then that new little girl executed an almost perfect forward roll in front of the entire class.

Thank you, Universe for your well-timed poetic justice.

She got a high five.

I know that little boy didn't have any feelings of ill will toward his female classmate. He didn't say those words to insult or demean or ridicule, at least not intentionally. It was likely an innocent observation. But his choice of words has hummed around like a swarm of angry irritated bees in my brain for days.

Because this sweet little baby-faced boy is only five. He has yet to be subjected to the mind scrub that is public school. Too young to understand sexist programming, or gender stereotypes, or to see women as mindless objects. He must still think his mother is a super hero.

And yet somehow, it seems to have already crept like some dark scourge into his young and impressionable mind. To so easily dismiss someone's ability to succeed because they are female seems like it could have long-reaching effects, like the creeping tendrils of a pesky choking weed. Who is to blame? Parents? The media? Other children? The evil marketers of children's toys? How is sexism passed on into the subconscious of nursery school children?

There is a good possibility that I am over-reacting. Preschool children are just beginning to understand their own gender identities. And since small children tend to think in rigid terms of black and white, it makes sense in their developing brains to compartmentalize males and females and what they are capable of doing.

As they mature, children's thinking tends to become more flexible. Chances are good that he will grow out of the strict stereotypical views that he now holds in an innocent attempt to make sense of a confusing world. 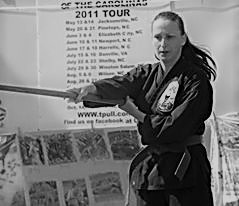 In the mean time, a karate class led by strong and capable female instructors is right where he needs to be Hopefully, it will also help those three little girls believe that they are capable, strong, and able. And when those capable, strong, able little girls in class start pushing his small 5 year-old body around the mat, well that's only going to bring home the message that women aren't weak and frail, that they aren't something to be dismissed, that they can command their own respect.

And just to be on the safe side, I think I'll kick the bag extra hard before class. Because that's how I plan to fight sexism. One powerful roundhouse kick at a time. Powerful role models are the only thing strong enough to combat both the subliminal and the overt messages our children are pummeled with relentlessly.

You Rock! Thank you! For I am the Mother of 2 OUTSTANDING young girls.
Two young girls that stand tall and know their worth. I'm not saying that one or the other doesn't get discouraged or down trodden sometimes...but then they dust themselves off determined to overcome whatever got them down. They make me so proud everyday!
The world need make way...as the women are rising.