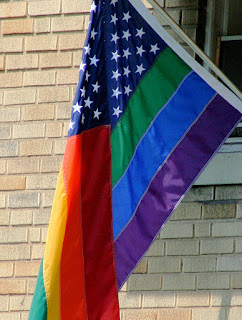 Yesterday, Trump announced via tweet that he was reinstating a ban on transgender people serving in the United States military. This is a reversal of an almost last minute policy President Obama made on his way out the Oval Office door.

“Effective immediately, transgender Americans may serve openly,” then Defense Secretary Ashton Carter announced, on June 30, 2016. “They can no longer be discharged or otherwise separated from the military just for being transgender.”

He said that the Pentagon would cover the medical costs of those in uniform who wished to undergo gender transition, and that it would begin a yearlong training program for service members on the changes.

I can't help but wonder if that yearlong training program for service members was included in the Pentagon's predicted policy-change cost of $4.2 million dollars a year.

Even though I am the mother of an army soldier, which gives me a specific perspective on military current events, I am no military expert. Claiming to be an expert on the grounds that my son is active duty military would be like giving advice to brain surgeons because my uncle is a brain surgeon. That would be stupid. (Although I did read American Sniper

and even saw Lone Survivor

in the movie theater, so I am obviously more qualified than most, right?)

Anyway, please be advised to take my opinions with a grain of salt. Certainly not more than several grains of salt. And maybe some tequila and lime. It will be more interesting that way.

It didn't take long for lines to be drawn and sides taken over this policy announcement. As news of Trump's transgender ban hit the internet's social media shit fan, people either joined in a virtual standing ovation or started screaming fits about taking away transgender rights.

First, I would like to remind everyone that the avatars you are insulting are actual human beings. Sure they may not think like you, and maybe they didn't vote like you, but they are in fact people. Most of them get up each morning, drink a cup of coffee, drop their kids off at school, and worry about how they are going to pay the bills.

Even people who are different than you deserve to be treated with dignity and respect. Isn't that the whole concept behind LGBTQ rights? I'm talking to you here, Liberal Left. You shouldn't have to belong to some trumped up marginalized group in order to be treated with at least basic common courtesy.

And to the Right... this isn't a sporting event. And even if it were, taunting the opposition when you score is really, REALLY poor form.

But here's the deal:

No one has taken away anyone else's rights.

Nowhere in the Constitution is "military service" listed as an inalienable human right.

You see, you don't get to join the military just because you want to. It isn't some summer recreational activity you just waltz into the local YMCA and sign up for. It isn't a summer soccer league or swim class. The United States military is one of the most selective organizations on the face of the planet.

Everyday, Uncle Sam discriminates on the basis of age, intelligence, education, fitness level, body composition, drug use, medical history, and mental health. The United States military can deny your enlistment for anything from ingrown toenails to low scores on the ASVAB ( Armed Services Vocational Aptitude Battery).

According to the Pentagon, approximately 71% of the 34 million 17-to-24-year-olds in the U.S. do not qualify for military service.

The vast majority of those who want to serve are denied. Currently, the U.S. military only takes about 20% of the eager applicants who walk through the door of their local recruiting office.

The number of citizens serving in the military is a very small slice of the American pie. Military personnel make up LESS THAN ONE PERCENT of the total U.S. population.

That's not very fair, is it? Well, war isn't exactly fair, either.

Uncle Sam is not an Equal Opportunity Employer, and military service isn't a right. It's a privilege.

A privilege is something enjoyed by a group of individuals beyond what is available to others. It is something often regarded as an honor, although in today's culture the word "privilege" is almost a dirty word. In spite of that, not everyone who wants to serve in the armed forces actually makes it past the aptitude tests, physical assessments, and psychological screenings required for service.

It's like this: You may have a right to use the bathroom, but you don't have permission to use this particular bathroom. Individuals may have the right to employment, but that doesn't mean he/she/they have to be employed by the U.S military. (And yes, I'm using the bathroom analogy on purpose.)

When the United States military claims to have an elite fighting force, they really mean it.

The reason there are so many screenings and tests and evaluations and hoops to jump through is important. Military service is a privilege only given to those best equipped to defend us against those who wish to do us harm.

There are barbarian and savage forces knocking at our door, bent on our destruction. Even if it may be true that we're worthy of their ire. They don't want to hug it out. We can't keep them at bay with good intentions, inclusiveness, political correctness, or fluttering rainbow flags.

No, what keeps those forces from busting down our door is an elite fighting force. And it needs to remain elite to be effective. The card-carrying members of our armed forces should be mentally and physically capable of beating back the wolves at our doorstep. The more selective, the better in my book, because I enjoy sleeping soundly at night.

But before you send me hate mail bitching about how bigoted I am or call me awful names because I'm condoning the dehumanization of a subset of the population, let me clarify something.

I don't care if you claim gender dysphoria. I don't care what you do to your body. I don't care if you play with your own hormone levels, or undergo gender reassignment surgery. I don't care whether you float from identifying as a boy to a girl to a frickin' toaster on a day-to-day basis. I just don't care. I won't think you are less of a person because you may slap a "Transgender" label on yourself. I will treat you with all of the respect and dignity I can muster. I am Southern, after all. I'll hold the door for you, smile and comment about the weather, and even "bless your heart." That's just common human decency.

However, I don't think thrusting individuals with gender dysphoria into the military is a wise idea, and it has nothing to do with treatment costs, social stigma, or backwards bigotry.

Whatever the causes of these often traumatic mental issues is immaterial. Will acceptance cure these mental issues? Maybe. But we shouldn't be gambling on it by tossing these individuals into an environment riddled with its own epidemic of mental health issues.

According to a 2014 study published in JAMA Psychiatry, nearly one in four active duty military members show signs of a mental health condition. With rates of depression five times higher than non-military populations, and suicide rates almost three times those in the civilian world, military life is obviously mentally stressful.

I suppose if that makes me a bigot, I'll just have to wear the label. I'd rather be a logic-driven bigot than a blind idealist if it saves the life of even one fragile person.

And there's way more on the line here than the lives of these "marginalized"people. Because in comparison to the barbarians lurking at the door, we're all pretty fragile.

Posted by ajoneswebb at 2:10 PM

I'm not even particularly liberal and I think you're a bigot.

Justin, I'm not a liberal at all and I think you're a fucking idiot incapable of rational thought.

Verrill F. Madden- And you are a fucking troll. This post is full of gross exaggerations and is devoid of rational thought...and yet you fell
for it.