5 Ways Not to Sexually Harass Your Co-Workers at the Office Christmas Party. 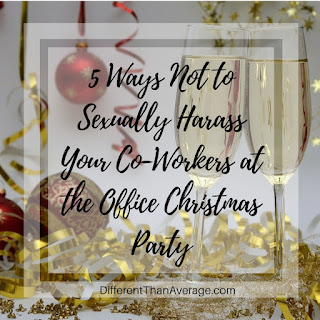 'Tis the season for office holiday parties. Normally when this time of year rolls around, we don those ugly sweaters, get drunk on the company's dime, and engage in some "Dirty Santa" shenanigans.

But the times, they are achangin'.

The most sacred traditions of the holiday are in jeopardy. This year, when everyone from Harvey Weinstein to Matt Lauer to Al Franken have had their careers end in flaming wreckage after accusations of sexual assault or harassment, everyone everywhere is wondering who is next.

Many companies have decided to just do away with the holiday office party altogether. Others have watered them down so that an evening spent answering the customer service line seems more fun.

Who actually wants to hang out with their co-workers when there isn't any alcohol involved? Most of those people are the reason I drink in the first place!

The solution seems fairly clear: "Don't sexually harass your co-workers." But it may be a bit more complicated than that. The lines are still being drawn between what is acceptable social behavior and what is vile, unacceptable, and will send your ass straight into the fiery pits of Hell (aka the unemployment line care of Human Resources).

Things are fuzzy right now. I understand everyone's apprehension and confusion. Don't worry. I'm here to help. Here is the short list of Ways Not to Sexually Harass Your Co-Workers at the Office Christmas Party.

It is a short list, because time didn't allow for my 45 minute Power Point or 378-page Resource Guide. Expect those at the next business meeting.

Now. When you are tempted to comment on how totally hot your female co-worker is in that tight red sweater, ask yourself if you would make the same comment to Doug from Accounting. Would you tell Doug from Accounting, "Wowza! You look hot in that sweater" while staring at his moobs? No. No, you would not.

Would you instead say "Good evening, Doug from Accounting. That's a nice sweater" while maintaining eye contact. Perhaps.

Or maybe you just wouldn't comment on Doug from Accouting's sweater at all, because that's weird and you wouldn't want poor awkward Doug to feel uncomfortable or get the wrong idea about your sexual preferences. Yeah. You probably shouldn't say anything.

The bottom line? Ask yourself "Would I say that, do that, give that to, or otherwise think that about Doug from Accounting?" If the answer is no, then don't do it.

2. Drink responsibly. You aren't at a college frat party. You are an adult now and this should really go without saying.

I'm not about to suggest you shouldn't drink at all. That's the whole point of an office party, and after the year we've had, I think we all deserve to down a few (just be sure to hand over your keys and maybe call an Uber). However, if drinking tends to lead to sexual assault for you, it's time to step away from the cash bar.

Ladies, this one is for you, too. Having a few glasses of wine is one thing, but getting passed out drunk in the corner of the office party is never a good idea. Too many women have been groped or worse after they've had a few too many cosmos. Besides, that sort of thing isn't exactly professional, and this IS an office party. Drooling on that pretty red sweater while your co-workers watch isn't going to land you that next promotion.

And yes, I realize this is "victim blaming" so go ahead and send your hateful emails. I will continue to believe the person ultimately responsible for a woman's safety is the woman herself.

3. Limit physical contact. Handshakes are always appropriate. A hand on the shoulder might be okay, but let's keep this professional. Don't let that hand linger. Don't start rubbing. And I don't care how soft her red sweater is...

No! Don't let it drift any further south!

And you should definitely NOT grab her by the you-know-what. Unless you are the President of the United States, you're definitely not getting away with that.

If you have trouble keeping your hands to yourself, just shove them in your pockets. Sure you might look awkward like Doug from Accounting, but he's never had a sexual harassment charge, has he?

5. Make an early exit. Like Mama always said, "Nothing good happens after midnight." Hanging around until the wee hours of the morning while the alcohol flows is just begging for trouble. The minute someone says, "Hey, Doug from Accounting! Hold my beer while I grope this passed out chick in the red sweater," it's time to hit the road.

"Hasta la vista, co-workers. I'm off to work on my end-of-the-year reports."