Homeschooling to Prepare for the Zombie Apocalypse 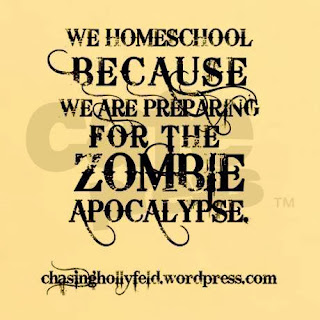 I swiped this and posted it on my Facebook just a little while ago.  Ours is a family that loves all things zombie.  On Sunday nights, you'll find us in our zombie hunter shirts (Mine features Darryl Dixon) with large bowls of popcorn, glued to the television for The Walking Dead.  Halloween often finds us dressed as a zombie family.  And you know those little stick figure families that are glued to the back window of every minivan in town?  Yeah...ours is a zombie family.

Now we homeschool for a lot of reasons.  I have a list of several hundred reasons, actually, and while prepping for the coming zombie apocalypse isn't on the official list, perhaps it should be.

A casual observer of our homeschooling activities might actually be convinced that we are in zombie apocalypse training.  Here are just a few activities the kids have initiated in the past several weeks.  I'm pretty sure I've got the A team right here.

1. The boys made their own water filtration system with cotton, charcoal, fabric, and plastic bottles.  They successfully filtered mudpuddle water to almost crystal clear drinkable water.  They purified it with iodine tablets before consumption, just to be on the safe side.

2.  The oldest has drawn up plans for a rain collection system complete with spigots and hose attachments, a dual barrel system to collect rainwater from the roof of the house.  He even has a system for extra run-off.  I'm pretty sure this project will be built to completion by the end of the year.

3.  After researching snares, the kids placed several different types of wire snares in the trees in the backyard in attempts to snare one of the neighborhood squirrels.  No success so far.  They are currently experimenting with different baits.

4.  Three of my four children are archery enthusiasts and have even competed in several archery tournaments.  (Silas has won first place in his division several times).  We recently practiced with a cross wind to see how it affected arrow projection.

5.  The boys recently started a camp fire from scratch with flint and steel at the riverfront park a short walk from the house.  They then commenced to fix themselves lunch over the fire.  I found all of this out after the fact, but since Daniel is 17, that's almost the same as "adult supervision".....right?

6.  Daniel's big project this summer was his very own vegetable garden.  He did everything on his own from start to finish (planned the layout, spread manure, sprouted seeds, transplanted, tended and harvested).  He had a HUGE crop of tomatoes, but also had success with okra, zucchini, peppers, and cucumbers.  He even helped me can a large batch of homemade spaghetti sauce made almost exclusively with produce from his garden.