It's Columbus Day.  And while it may be nice for government employees and school kids to have a fun-filled three-day weekend, it's pretty inconvenient for banks and the post office to be closed.

But there are the Columbus Day sales.  And who doesn't love a good sale.

Now before you rush off to the malls  to celebrate this holiday with some extreme shopping, there are a few things you should know about the guy this holiday is celebrating.

Probably way back in grade school you learned about Columbus.  Recite it with me: 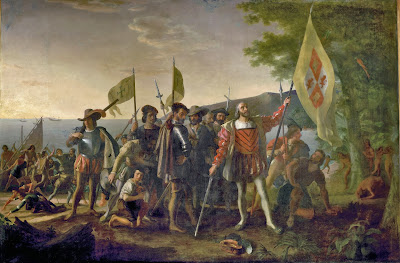 In fourteen hundred ninety-twoColumbus sailed the ocean blue.He had three ships and left from Spain;He sailed through sunshine, wind and rain.He sailed by night; he sailed by day;He used the stars to find his way.A compass also helped him knowHow to find the way to go.Ninety sailors were on board;Some men worked while others snored.Then the workers went to sleep;And others watched the ocean deep.Day after day they looked for land;They dreamed of trees and rocks and sand.October 12 their dream came true,You never saw a happier crew!"Indians!  Indians!"  Columbus cried;His heart was filled with joyful pride.But "India" the land was not;It was the Bahamas, and it was hot.The Arakawa natives were very nice;They gave the sailors food and spice.Columbus sailed on to find some goldTo bring back home, as he'd been told.He made the trip again and again,Trading gold to bring to Spain.The first American?  No, not quite.But Columbus was brave, and he was bright.

Cute isn't it.  Makes Columbus sound like a pretty nifty guy what with how nice the natives were to him, and how happy his crew was, and all that spice.  They were probably some pretty neat guys to know. Maybe buy a round of beers for.

Except they weren't.  Columbus and his crew were pretty stinking mean to the natives, even after they had helped rescue them from the wrecked Santa Maria (one of Columbus's three ships if you can't remember all that useless crap teachers attempted to cram into your brain back in 3rd grade.)  Great upstanding human being that he was, Columbus repaid the natives by enslaving them, feeding them to hunting dogs, and chopping off their hands if they couldn't give him enough gold. 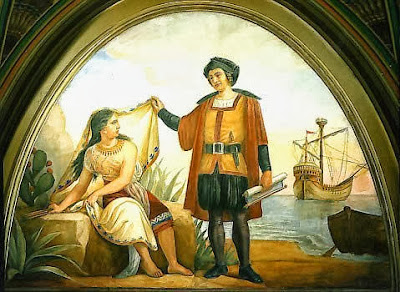 But wait!  His atrocities didn't stop there.

Columbus was known to reward his officers with gifts of young girls...to be used as sex slaves.  Young girls were especially in high demand.

Columbus wrote in his journals:


"A hundred castellanoes are as easily obtained for a woman as for a farm, and it is very general and there are plenty of dealers who go about looking for girls; those from nine to ten are now in demand."

Plus with introduction of catastrophic diseases like small pox to the New World and the imbalance in the population's work force brought about by the slave trade resulting in widespread malnutrition and starvation, Columbus is directly and indirectly responsible for the deaths of about 3-5 million people.

So sleep in if you get the chance, but don't "celebrate" this inane "holiday".  Maybe take a moment of silence for the people, and families,....heck whole societies this man tore apart and destroyed.  It should be a day of reverent and sad remembrance, not a day of festivities and parades and department store sales.

Unless the sales are on designer small pox infested blankets, that is.