"The family is one of nature's masterpieces." ~George Santayana

Family is a beautiful thing, especially when it functions like a well-oiled machine of love and compassion and neatly folded laundry, which is seldom.  Most days our family is loud and chaotic and more than slightly rude, full of snark and dirty socks and junk food...but even on those days, it's still beautiful.

I was born an only child, and I grew up out in the boondocks surrounded by marshy swamp and my father's coon hounds.  With no real friends (other than those wonderful floppy-eared dogs) and no siblings, my life was quiet and lonely.  For this reason, I knew when I first thought about having children, that I wanted a large family.  I looked at sibling relations through the rose-colored glasses of an only child.  Wouldn't it be wonderful to have built-in friends, sisters you could tell all of your deepest and darkest secrets, brothers who could squash bugs and tie knots and open tightly screwed jars?

Like most clueless mothers, once that second child came barreling into the family, I expected my beautiful first born son to thank me for giving him his little sister.  And I remember quietly standing in the doorway, unnoticed by my curly-haired angelic son, as he gazed misty-eyed at his tiny little sister.  I'm pretty sure I got a little misty-eyed  too as I listed in my head all of the feelings I thought he must have...feelings of wonder and love and protectiveness.  And then he swatted her on the head.  And she cried.  And he genuinely attempted to comfort her...by saying, "You ruined everything! ...but I guess you aren't too bad."

And that first interaction about sums up how her brother loves her.  Maybe with resentment and against his better judgement and more than a little begrudgingly....but fiercely and unconditionally all at the same time. 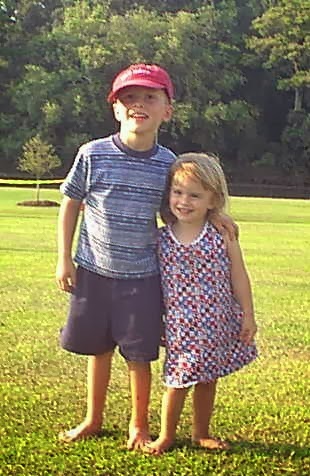 A few years later, after their relationship had blossomed and my son concluded that he really couldn't send her back,  I watched him carefully and tenderly help his toddler sister to the top of the slide, whispering words of encouragement and a hand to hold the whole way...and when they reached the top...he pushed with one violently forceful shove, nearly giving her whiplash and sending her barreling down the slide screaming (whether from fear or delight, I'll never know).  And when she went airborne at the bottom of the slide and planted face first into the playground sand, he yelled from the top of the slide, "Get up!  You're not hurt!"

And perhaps that is the real beauty of brother love, that he can in the same action offer support and reassurance, yet so mercilessly push her to her limits.

Now they are navigating their way through difficult teen years.   I've witnessed them quietly help one another through hurts.  When I have wanted to rush in and fix things, I've seen them simply sit together in silent understanding...or distract one another with random jokes and shared memories.  All of those lessons learned on the playground and at the dinner table and over large Lego projects have bound them together with a mutual respect and understanding.

They know one another's faults, desires, virtues, accomplishments, failures, exactly how long each one can hang from the monkey bars, and how hard a punch they can take.  And they will stand by in complete and brutal honesty and yell exactly what the other needs to hear, as painful and dirty and real as it might be.  They will let each other know when they've crossed the line (just like they did when they were little by riotously tossing the offender out of the blanket fort for passing gas). But they will just as riotously scream encouragement from the sidelines of a little league baseball game or karate belt test.

As much as they might want to smack each other (and often do), they are still bound together by some primal law, some pack code that I don't understand as the outsider (aka their mother).  Their relationship constantly teeters on some fine line between loyalty and distrust.  And they tap dance all over that line.

I've witnessed them call each other the ugliest of names and then threaten immediate painful bodily injury to the outsider who shouted the very same insult they had just laid down.

Perhaps the reason our children are so brutally honest with one another and yet so fiercely protective is because they have so much at stake in the relationship.  It is in their best interests that they each become decent and respectable human beings, after all the sibling relationship is one that outlasts all others.  They greeted each other coming into this world, and they will see each other out in old age.  The relationship between brothers and sisters lasts longer than most marriages, survives the deaths of parents, and subsists through some of the harshest and despicable disagreements that would destroy any other human friendships.  Friends and significant others, coworkers and classmates will shift in and out of our lives, but brothers and sisters will be there, even if hiding in the background shadows, through all of life's moments.

Last week, when his sister had her first outing with a boy (GASP), Daniel immediately started what he called reconnaissance and surveillance, a big brother kind of background check.  And when the boy came to pick her up, Daniel lamented the fact that he had left his black belt at the dojo, but commenced to gun cleaning in the living room anyway...just to send a clear message.  Because, dammit, he's not letting anyone hurt his little sister...only he can shove her off the top of the slide...

Because he loves her...even if he did want to send her back.
Posted by Alice Jones Webb at 1:59 PM