Fifty-one years ago today, Martin Luther King, Jr. delivered his famous "I Have a Dream" speech from the Lincoln Memorial steps in Washington, DC.  It was a defining moment in the American Civil Rights Movement and landed Dr. King a spot in history as one of the great shapers of modern American culture and thought.

"I have a dream that my four little children will one day live in a nation where they will not be judged by the color of their skin, but by the content of their character." 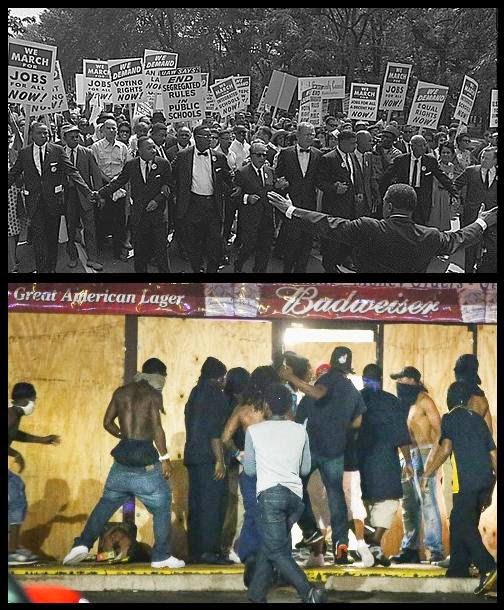 The subject of modern day racism has been right in our faces for the last several weeks.  The fatal shooting of 18-year-old African-American Michael Brown by a white police officer in Ferguson, MO and the resulting riots and militarized police presence sent the subject of racism sprawling across national headlines and raised chatter on social media.

Accounts of what actually happened couldn't be more disparate.  I don't know what happened between the officer and Michael Brown, and neither do you.  And if someone tries to convince you that they know exactly what happened, you probably shouldn't believe them. (If you do, I have some really fabulous oceanfront property in Kansas that I'm trying to sell on the cheap.)  It's a he said/she said nightmare that will probably never be completely sorted out.  Good luck to the sorters, and should it be found that the officer in question used force outside the scope of his duties, he should be appropriately prosecuted.

There are some things we know for certain about Michael Brown.  For instance, it is undisputed that he was unarmed.

We also know that Brown was the chief subject in a reported store robbery that occurred just minutes before the fatal shooting.  Brown was seen by witnesses and recorded on video surveillance carrying a box of cigars from a local liquor store and aggressively shoving and using his significant size to bully the store clerk who attempted to confront Brown on his way out of the store.

We also know that more than half a dozen photos were recently discovered of Brown flashing gang signs with known gang bangers.

We know that Brown, a dabbling rapper, left behind a string of violent thug-like lyrics.  His songs contain flagrant boasts of murder and drug use and sex with hos. They feature poetry like this, "My favorite part's when they bodies hit the ground. I soak 'em up like I'm wringin' out a sponge."

Of course, performing and writing thug music doesn't inherently make Brown guilty of being a thug (although it does make him guilty of using horrible grammar). Nor does flashing gang signs prove gang involvement. However, it does give us insight into his mind and values.

While vulgar rap lyrics, incriminating photos, and liquor store theft certainly don't give local police carte blanche to gun down an unarmed man in the middle of a neighborhood street, it suggests that Michael Brown's character was at best questionable.  And as more information surfaces (the release of his juvenile record is imminent), the half truths and blatant lies of his family, friends, and neighbors are being exposed.  (Could their lies be further proof that Brown was involved in gang activity?  Whole neighborhoods have been known to lie to protect local gang members out of fear or loyalty or both.  No certainties here... just something to think about.)

In spite of Michael Brown's questionable character, his funeral this past Monday was quite the spectacle.  Thousands of mourners filled the sanctuary of Friendly Temple Missionary Baptist Church and spilled out of the building into the streets.  Among the grieving were celebrities like Snoop Lion, Diddy, and Spike Lee.  Famous public figures such as Rev. Jesse Jackson, Rev. Al Sharpton (who delivered the eulogy), Martin Luther King III and Rev. Bernice King were in attendance as well as three White House officials (Broderick Johnson of the White House's My Brother's Keeper Task Force, Marlon Marshall and Heather Foster both of the White House Office of Public Engagement... There are apparently White House Officials for stuff I didn't even know existed.). The funeral was televised and broadcast over the internet via LIVESTREAM (You can still view it here).

I wasn't going to say any of this.  I wasn't going to publish this blog.  In our current society, being accused of racism is like a kiss of death.  There is no crime more heinous in our society, where political correctness has run amok and ruined many a good person, and kept many more silent.  People lose jobs, receive death threats, and suffer harassment or persecution, even when the accusations are unfounded and absurd.

Morgan Freeman said, "How are we going to get rid of racism?  Stop talking about it."

I deeply and passionately agree with Mr. Freeman.  The more attention we give racism, the bigger and more real the monster becomes.

But here I am talking about racism, which kind of makes me a hypocrite.  However, I also deeply and passionately believe that there are things that need to be said that aren't being said unless whispered in dark corners.  There are greater hypocrisies that can't go unchecked.  Either we want people to be judged by the content of their character or we don't.  Either we want them judged by their skin color or we don't (and I sincerely hope we don't).  We can't continue to pick and choose depending on whether the situation fits our political or social or personal agendas.

So I may be labeled a racist.  (It wouldn't be the first time.  See my blog essay on The Irony of Black History Month.)  But before you stitch that big red "R" on all of my sweaters, let me just clarify a few things...

Criticizing black people who deserve criticism isn't racism.  It's judging them by the content of their character.  Their being black has nothing to do with it.

Minorities don't get a free pass when it comes to criticism. Even though the fear of a racist label sometimes causes critics to keep denunciation to themselves, race shouldn't be a veil worn to hide from consequences of bad decisions or poor morality.

I'm siding with Dr. King. We should still be judging people by the content of their character... especially when their character is suspicious.
Posted by Alice Jones Webb at 12:43 PM