Whatever Happened To Officer Friendly? 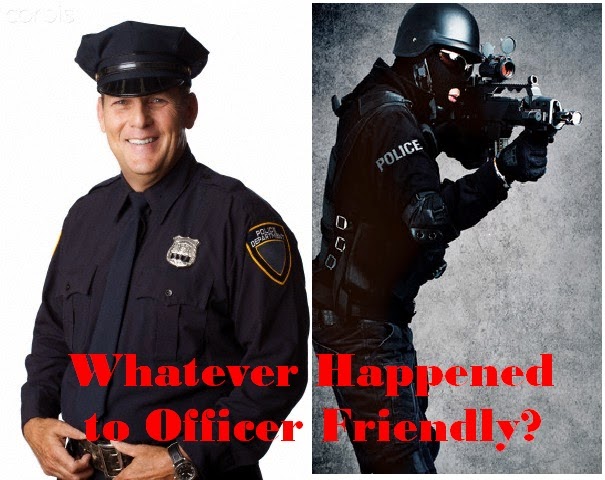 Way back in the Dark Ages, which I like to nostalgically refer to as "the early 80s", I remember meeting Officer Friendly.  Because I was a wide-eyed and innocent little girl in patent leather shoes and pigtails, I honestly believed the guy's name was Friendly, which seemed rather unusual to me, but certainly handy for speaking at elementary school assemblies about how the police are our friends.  Officer Friendly was a super nice and overly smiley law enforcement officer dressed in a crisp uniform who talked to us about stranger danger, street safety, and dialing 911.  If we were particularly well-behaved, at the end of the assembly we got to shake Officer Friendly's hand and maybe even pet his super-cool dog.

It was awesome.  Not only did we get to spend an hour away from the school day drudgery of memorizing multiplication tables, practicing our cursive writing, and learning all 9 planets of the solar system, we got to meet a real-life super hero.  We learned that the police were incredibly awesome, and definitely on our side, and if we were ever lost or in danger all we needed to do was find a policeman and he would save the day.  I grew up believing the police were always the good guys, that they were always there to protect normal people like me from all of the horrible evil bad guys of the world.

Either times have changed or I was a seriously naïve little girl. 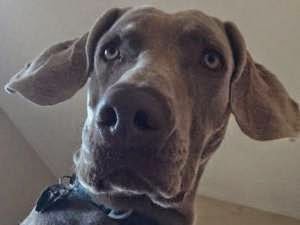 Because Officer Friendly would never have shot this family dog in his own back yard. Geist was shot in his owner's private fenced-in yard by a Salt Lake City police officer conducting a search for an allegedly missing child (it was later discovered that the missing child wasn't missing at all, but safe and snug in his own home).  The officer entered the back yard even though there was no evidence suggesting the child was on the property.  The family dog approached him, and BAM.

Because Officer Friendly would never have used a banned choke hold maneuver to subdue New York City's Eric Gardner.  Gardner was being arrested for selling single untaxed cigarettes on a street corner.  The asthmatic, who was heard telling police repeatedly, "I can't breathe" was pronounced dead on the scene.

Because Officer Friendly would never have ignored a stop sign; t-boned another vehicle, seriously injuring it's occupant; and then arrested the sober driver for DUI. 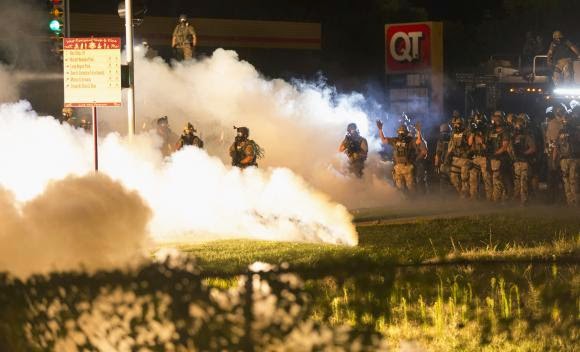 If you are paying half an ounce of attention, you've seen the disturbing images of an overly militarized local police force.  It's like a frightening  post-apocalyptic nightmare or the latest cheap dystopian teen flick.  Complete with gas masks and assault weapons, the local police have bullied up on demonstrators (both peaceful and violent) with tear gas and rubber bullets, and they've shouted obscenities.  They've arrested news reporters and pointed guns at unarmed individuals and pretty much spread terror. It's pretty serious stuff (and I won't even get into the shooting incident of an unarmed teen that sparked the riots).

The Ferguson police department looks a lot like militarized force.  They hide their faces and brandish weapons in a way that makes them look more like monsters than those who are supposedly dedicated to protect and serve the public.

The use of surplus military equipment by possibly under-trained police units has come under scrutiny since the images from Ferguson hit the press.  There have been questions about the level of training the police are receiving in the use of military surplus equipment, and questions about the necessity of military-grade equipment to keep peace on our civilian streets in the first place.  But you can't hand people flashy new toys and expect them to let them sit up on some storage room shelf collecting dust.  Just because you hand some a guy a rope, it doesn't make him a cowboy.  Giving a cop military-grade equipment doesn't make him a soldier... although he'll probably want to play at being one.

President Obama once said, "Weapons of War have no place on our streets."  Perhaps he should have qualified that statement by adding, "unless they are wielded by an under-trained police force using terrorist tactics."  Because these are arguably acts of terrorism.  The police are using intimidation and threats of violence to frighten and coerce.  That is terrorism.

With all of the news about police misconduct hitting the news on an almost daily basis, it's starting to become harder and harder to believe in good ol' Officer Friendly.  The police are starting to look more and more like the bad guys, like egotistical thugs who can do what they want without retribution because... well... they're police officers.  They ARE the law (and how dare you think otherwise or bother them with all of that Constitutional bull crap).

We can no longer cling to the notion that every policeman is our friend.  Statistically we are more likely to be killed by a policeman in the line of performing his "duty" than we are to be killed by official terrorists.  Innocent men go to prison after being falsely arrested.  Crime labs tamper with evidence.  Most police brutality cases are never investigated or are investigated from within, all but assuring that the offending officer is found to be operating within his official capacity.  There are cops that have their video equipment "fail" at very convenient moments.  Excessive force is rarely reported.  This is the way it is.

I know some police officers who are wonderful people.  They take their jobs seriously and generally have the public's safety and well-being in mind.  But police officers are, at the end of the day, just human beings doing jobs with a gun and a badge.  They deal with violent people on a frequent (if not daily) basis and could be justifiably jumpy.  After all, when their work day is done, they just want to go home to their families in one piece.

Policemen aren't morally perfect infallible super heroes.  They never were.  And because of their lack of super-human infallibility, we need more accountability for police officers.  Both individual officers and the agencies that employ them need to be held responsible when they step outside of the actions absolutely necessary to maintain order and control crime.  We can't allow the power they brandish to go to their heads.  They must obey the same laws that they are employed to enforce.