Over the weekend, a local news station reported on a house robbery. On the surface, it sounds pretty run-of-the-mill.  People's homes are broken into and their possessions stolen with frightening regularity. Most of those cases never make the evening news.  But this one, which took place in Cumberland County, North Carolina, was definitely not your ordinary garden-variety house robbery.

According to authorities, an M-4, M-14, AK-47, and a STG-77 as well as extra magazines for the weapons, boxes of ammunition, and military camouflage vests with body armor plates were taken from the residence.

This family was seriously ready for the zombie apocalypse. 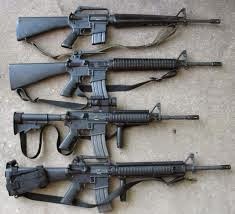 Regardless of whether or not you can understand why this family had this type of arsenal in their possession (zombies...duh!), please keep in mind that their home was invaded and their property stolen. They are victims of a crime, a crime which has certainly shaken their sense of security in their own home, a sense of security which may have already been tenuous considering their impressive weapons cache.

Opinionated local viewers have filled up the news station's Facebook feed with comments about the gun owner's irresponsibility.  When people suggest that it was the gun owner's fault the weapons were stolen, that he should be prosecuted for "allowing" someone to steal his guns, and that if no one owned guns there wouldn't have been any guns to steal... Well, that sounds a lot like victim blaming.

You might be familiar with "victim blaming" from another weekend news story concerning Jennifer Lawrence's second round of leaked nude photos. Any suggestion that maybe it wasn't such a great idea to store naked photos on a cell phone is met with accusations of "victim blaming".  As if you are blaming the victim of the crime for the crime itself.

The term "victim blaming" is most often used in cases of sexual assault.  Suggesting that the victim had anything to do with the assault, whether by her dress or her actions (or lack of actions) is criticized as victim blaming. Miss Nevada was accused of "victim blaming" for her brash and insensitive suggestion that women could learn martial arts to protect them selves from sexual violence during the interview portion of the Miss USA pageant. The four college students who invented innovative nail polish that changes color when it comes in contact with several common :"rape drugs" have also been accused of victim blaming, because women shouldn't have to worry about guarding their drinks.  Maybe we should just teach men to not rape.

If we were to turn around some of the Facebook comments about the burglarized gun owner to apply to other victims, say victims of sexual assault, we can see how duplicitous the criers of victim blaming really are.

"Only paranoid people believe they need that kind of firepower!" versus "Only skanks and whores dress like that!"

"If you want an arsenal like that, then you need to make sure they are locked away safely." versus "If you want to go dancing in the clubs, then you should go in a group to ensure safety."

Call me crazy, but suggesting a gun owner is responsible for the theft of his guns isn't much different than suggesting Jennifer Lawrence is responsible for her leaked photos or a rape victim is somehow responsible for her assault. There are victims and there are criminals.  Even if there was something that maybe the victim could have done to possibly prevent the crime, it doesn't negate the injustice of the crime. And just because you don't agree with the victim's actions (whether it's wearing a sleazy outfit or owning military-style weapons), it doesn't give the criminal a free pass.

But maybe victim blaming is only for those that make it onto the acceptable, socially-approved list of victims (i.e. women, minorities, the impoverished).

Gun owners definitely don't make it onto the list. (It tends to be a liberal-designed list, after all.)

Maybe it's because they refuse to wallow in victimhood.

Heck, that's probably why they bought their firearms in the first place.
Posted by Alice Jones Webb at 10:53 AM