At least the Obama administration is consistent in the securing of it's borders.

Not only did the knife-wielding, Iraq war veteran fence-jumper sprint seventy yards across the lawn unstopped, he opened an unlocked door and waltzed right into the executive mansion.  He overpowered the first Secret Service Officer to confront him before he was finally tackled on the far southern side of the 80-foot-long East Room by an off-duty Secret Service agent.

While it is indeed surprising that this man managed to get through several layers that should have been secure, it may be even more surprising that the first Secret Service agent to actually confront the intruder was overpowered.  Although, the agent was female.

The word overpowered seems to be the word most of the news agencies are over-using to describe what Gonzales did to the female agent who attempted to stop him.  It's pretty vague and could mean a lot of things. But considering how much further Gonzales managed to get into the White House after the altercation. I am lead to believe she was not a significant factor in stopping him. She may have been laying incapacitated on the floor of the entryway... or Gonzales may have just shoved her and then outrun her. Either way, he dominated her physically.

I mean no disrespect to the woman's position.  It is certainly no easy task to become a member of the Secret Service.  There are stringent requirements of education and experience and background clearance and even physical fitness. This was not your run-of-the-mill soccer mom expected to guard the president and his family. I certainly admire and recognize her level of commitment and training.  She is certainly a member of an elite group of special individuals.

But she is still a woman.

There is a reason that most bars don't hire women to serve as bouncers and instead tend to rely on big burly muscular men.

Certainly the safety of the President of the United States and his family is of far greater importance than whether or not Bubba has too much to drink and smashes up the local pub.

Are we potentially sacrificing the safety and security of our highest-ranking public official for the cause of political correctness?

Last month, women were also extended an invitation to apply for U.S. Army Ranger school.  While the invitation doesn't signify the acceptance of women into the special ranks of combat Rangers, it does mean the Army is attempting to determine how it should open combat military occupational specialties to women.

Nothing is yet set in stone.  The school is still in the planning process, identifying volunteers and selecting them over the next few months.  However, the Army Ranger school has monstrously grueling physical demands.  The minimum PFT requirements are enough to keep most women from even getting in. The first of the three phases of sadistically taxing training should cull out most of the ones who do land a spot in Ranger school. 80 push-ups in 2 minutes, 12 pull-ups, a 2-mile run in less than 13 minutes, a 16 mile hike with a 65-pound pack (that's more than half my body weight!) should keep even the fittest, beastiest women from moving on to the next phases and then on to graduation.

Unless, in a fit of blind feminism and political correctness, the powers that be lower the standards for women. You know... just to make it fair.

The Army has already lowered it's minimum requirements for Basic Training PFT to even the playing field and ensure women can actually make it into the Army.  As it stands women are required to perform less than half the push-ups expected of their male peers and are given more than an extra three minutes to finish their two-mile run.

That's fine.  There are plenty of military positions for females where their weaker physical prowess is NOT an issue.  Shoot.  There are even combat positions where a woman's inferior physical strength might not be an issue. Flying planes and helicopters or operating other equipment, even serving as snipers leaves their weaker build out of the equation.

But the Army Rangers is quite a bit different and strikes a little too close to home.

My son wants, with all of his heart, to be an Army Ranger.  Chances are good that he will enlist at the beginning of the year.  While I have some major trepidation over his decision, especially considering the threat of ISIS and unrest in the Middle East, he is an adult and I fully support his pursuit of his dream, even if it isn't what I would have chosen for him.  I know he will make one hell of an Army Ranger! 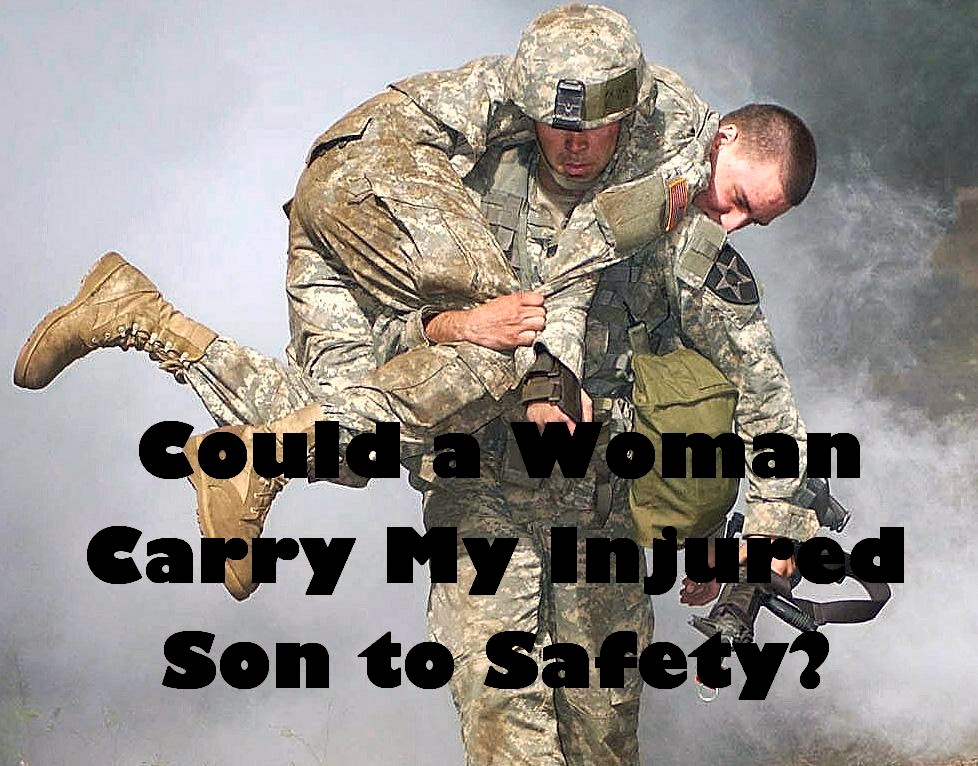 But as a mother... the thought of my son being injured in a fire fight with his only chance of survival being that one of his fellow soldiers carry his injured 6'2" 185 pound body out of harm's way... that the only soldier available to perform that duty might be a 5'5" 135 pound female who only made it through Ranger school because the physical requirements were lowered for her gender in order to be more politically correct... that is something I cannot emotionally handle.

It's not about being fair.  It's not about how hard women work or train. It's not even about whether women can handle the emotional or mental strain of combat situations.

At the end of the day a woman, even a woman in top physical form, is still a woman. And most women are not capable of physically carrying out the same duties a man is capable of.  We can't afford to sacrifice the safety of our sons (or our president in the case of the overpowered female Secret Service agent) for the sake of being "fair" to women.

Because that's just not "fair" to the men who have to count on them, sometimes for their very lives.
Posted by Alice Jones Webb at 1:49 PM

This is such an interesting blog. You are very knowledgeable about this subject. Please check out my site.
Army Rangers