On Monday night, I watched my tiny eleven year-old daughter hip toss three grown men. (Don't worry, it was during a karate class. She's not out thugging on the streets.) The average weight of her victims is well over 200 pounds and one of them, at almost 6' 2" towers over her by significantly more than a foot. She accepted the challenge with confidence and skill. It seemed almost effortless on her part as body after body landed with a booming thud on the mat. It was a thing of beauty.

Her performance was met with light applause and some pats on the back, a few high fives from the adults she had thrown. She beamed. I know she's still thinking about it several days later, because she keeps bringing it up in conversation. She has commented on how easy it seemed and how surprised and pleased she was by that. She's anxious to do it again and can't wait for the next opportunity. She is so apparently proud of herself (as she should be. Not every eleven year-old kid spends their days flinging hefty grown-ups around).

Those short moments when she hoisted those heavy men and slammed them on the floor, and the moments afterward when she basked in her accomplishment boosted her self-confidence and self-esteem in ways I never could have accomplished as her mother . There are not sufficient compliments or assurances or affirmations I could have whispered in her ear. And while I could have perhaps tossed those men (although admittedly without the grace and skill she mustered) for her... it wouldn't have had the same benefit. 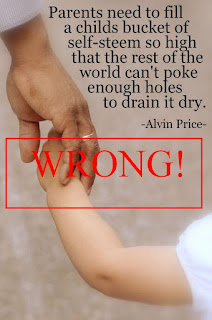 Within hours of watching my daughter bask in the thrill of accomplishment, I saw something online that was so starkly contradictory to her experience.  There are a few nifty little internet inspirational images floating around out there with a quote from Alvin Price. It seems like a nice enough saying. Plus it's most often paired with the stereotypical cheesy picture of small children smiling or playing on the beach, but I think it might be sending the wrong message to parents who sincerely want their children to be successful.

"Parents need to fill a child's bucket of self-esteem so high that the rest of the world can't poke enough holes to drain it dry..."

Perhaps I cringe a little because I am imagining a hovering mother shouting praises at her child all day  long for the most insignificant things, telling him how wonderful he is, how smart, how attractive, how proud she is of him. The quote conjures up super-sappy mom pouring platitudes of praise into her bratty little kid's puffed up ego.

But it's all a sham.

You see, there's a huge difference between egotism and self-esteem. Egotism is a superficially inflated opinion of one's self-importance. It's superficial because the poor waif hasn't done anything to feel good about himself. He just thinks he's wonderful because Mommy and Daddy have told him again and again and again how special and talented and awesome he is. Egotism is what is built daily by overly complimentary parents. Filling a child's bucket with unsubstantiated praise doesn't defend him against the holes the world tries to poke - and the world is a cruel and heartless place sometimes that's all too willing to poke ginormous holes in a person's self-esteem.

I admit that I haven't read any of Alvin Price's work. It's quite possible that this quote has been taken out of context and isn't at all cringe-worthy. However, it's easy for parents to forget about the most important part of self-esteem... SELF.

Self-esteem comes from inside, not outside. That's what self means.

My daughter's feelings of confidence and accomplishment didn't come from compliments or hollow praise. She was proud of herself. She knew she had done something worthwhile, and she felt good about herself because of it.

That's how self-esteem - real self-esteem - is built. It's not a bucket that can be filled by the parents at all. It must come from inside the child. It comes from achievement. It comes from setting goals and reaching them, from taking on challenges and conquering them, from setting expectations and surpassing them. The most parents can do is put their children in situations that foster those inner feelings of pride and accomplishment.

And sometimes the self-esteem is formed BECAUSE of those holes the world keeps trying to poke. Overcoming adversity builds confidence and self-assurance. Maybe those holes aren't so evil. Maybe they are just opportunities for your child to plug them up all on his own, and then feel good about it. Not because his parents told him he was clever, but because he proved it to himself. Nobody can take that away from him.

Sometimes those holes come in the form of big, heavy grown-ups.

Sometimes all it takes is a good hip toss to plug those holes back up again.
Posted by ajoneswebb at 2:33 PM