8 Things I Want My Sons To Know About Women

I am the mother of two teenage sons. What that means is 1) my laundry room usually smells like sweaty cotton t-shirts and dirty socks, 2) they think a lot about girls, and 3) they have everything figured out.

I recently overheard my oldest son tossing some pearls of wisdom about women  his younger brother's way. While there was definitely some good stuff being discussed (especially that tip about girls appreciating men who regularly shower. I hope that one sinks in), the whole discussion made me keenly aware of the gaps I've left in their education.

I don't want my sons to grow up believing so many of the lies society often tells about women.

Women have the reputation of often being irrational and overly emotional, then there is the image of the angry feminist, add on the subliminal programming of women as objects of desire and it's understandable why young men are more than a little confused about what to think of females. I know my time is running short - that soon these raging bundles of testosterone will be out of my home, unleashed on the world, and that any influence I have over their thought processes is rapidly fading. Still, I am a woman, and as a woman who loves them and who also wants to, in some small way at least, make the world a better place, there are some things I desperately want them to know. 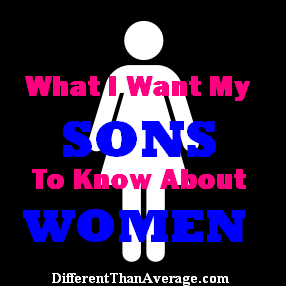 Sons, I hope you are reading this. There will likely be a quiz at the family dinner table.

1. Women are not just like men.  I have worked ferociously to be an example for you of what women can do, busting down gender stereotypes one baited fishing hook, roundhouse kick, and gunshot at a time. I hope in your brains I've planted seeds of equal respect, fairness, and non-bias. Still, I want you to know that just because women can do the same things that men can do - just because women should be considered your equals - doesn't mean that women are exactly the same as their male counterparts.

Whether it's social programming or brain chemistry, women and men are different in more ways than genitalia. While I tend to have a major dislike for sweeping generalities, women do tend to be more nurturing, intuitive, emotional, and better at remembering things. Men tend to be better at spacial processing and motor skills. That's why the stereotypes about bad women drivers and men forgetting anniversaries run rampant through society's tasteless jokes. Humor is, unfortunately, often based in truth.

The cool thing about gender differences though: together men and women make a good team. Too many times, typically male patterns of thinking and behavior have been held up as the gold standard, much to society's detriment (at least in my opinion). For example, in the on-going battle to narrow the (almost mythical) gender wage gap, we are shoving women toward higher-paying STEM careers. Perhaps a better focus would be to place more value (and therefore increased wages) on nurturing and interpersonal careers, like nursing and teaching - careers that already attract a greater percentage of females.

Bottom line: Value what women bring to the table, even though it's probably going to be different than what you brought to the potluck. It's variety that makes a good meal.

2. Women are not objects. They may be pretty to look at and fun to play with, but women are more than their bodies. Underneath the arousing attractive exterior is a person with very real hopes, fears, and dreams. Try to see the whole package, not just the wrapping paper. Like elaborately wrapped birthday presents, what's inside is the real gift.

Likewise, you might find yourself unwrapping an amazingly attractive package just to find that the box is empty, or worse - filled with stinky sewage. Don't be fooled by flash and glitter. In the long run, substance and character will make you a happier man.

3. Be careful who you sleep with. There are consequences to having casual sex, consequences that a lot of people just don't like to talk about. If you are having sex, there is always the chance of pregnancy. Always. Even if the chance is relatively small. While women have the choice to end a pregnancy or carry it to term, to raise a child or place it for adoption, a man's choice pretty much ends at ejaculation.

If that woman decides to raise your child, the child that shares both your DNA and hers, even if  you offered to fund an abortion or pushed for adoption, you will be financially responsible for that child until he or she turns 18. And should she decide to keep the child, you will be tied to that woman (a woman who may have been just a casual drunk lay), and her to you for the rest of your lives.

I want you to always ask yourselves this question, "Would I want this woman to be the mother of my children?" Because if you sleep with her, even if you use birth control, there is a chance of pregnancy. I may be old-fashioned, but I think I'm just being prudent. And if animal desires are stronger than logical caution, please wear a condom, even if she's "on the pill". A back-up plan that you are in control of is a really good idea, because...

4. Women lie. Not all women. Not all the time. But some women will lie to trap a man or to keep a man. One missed dose of birth control and you'll be answering to "Daddy", for the rest of your life tied to that woman (see #3). (And yes, I know that men lie, too... but we're talking about women right now.)

And while we are on the subject, you need to be careful with your affections and especially with consent. One false accusation of rape can ruin your reputation, your career, and maybe your whole life.

5. No means no. It doesn't mean maybe. It doesn't mean you just need to try harder. It doesn't mean you need to sweet talk her or otherwise convince her. If she says no to your advances, just respect her decision and walk away if you need to (This is where cold showers come in handy). Please understand that saying no in the heat of the moment is often just as hard as hearing it. Don't push the issue. Remember what I said about false rape accusations? The only thing worse than a false accusation is a real one. And  in these days of "rape culture" and consent forms and "silence isn't a yes," the lines between rape and consensual sex are heavily blurred.

6. PMS is real. So are pregnancy brain, post-partum depression, and menopausal mood swings. The natural ebb and flow of a woman's hormonal system often turns into raging out-of-control feelings. It's not because women are weak, or hysterical, or overly sensitive. It's not because they just need to suck it up and get over it. Women don't need to "grow a pair". It's just that sometimes, women are very real victims of their hormones. The best you can do is take us seriously when clinical help is needed. Otherwise, be patient and as empathetic as is possible while sitting there with your annoyingly steady hormones.

7. There is no such thing as women's work. Especially now that the majority of women are holding down full-time jobs and still doing most of the housework. That's not fair. I taught you how to do your own laundry, fix your own meals, and wash your own dishes for a reason. Housework and child rearing aren't just for the women in your life. They should be team sports.

It's not demeaning. It's just necessary for any home to function. Please, don't be one of those beer-guzzling couch potatoes who shouts at his woman from in front of his NASCAR race to "fix me a sammich!" It's rude. And unattractive. And liable to land you in divorce court.

Just pull your weight. It's not that hard. And folding some laundry really won't kill you and shouldn't bruise your ego too much.

8. Just a little chivalry. I know that it is quite a contradiction to insist that women are equal and shouldn't be the only ones folding laundry and making sammiches while also promoting gentlemanly chivalrous behavior. But I think that bubbling under the surface of most women is a desire to be cherished and protected.

Hold the door for her. Pay for the date. Compliment her appearance. Walk her to her car. Most ladies won't be offended.

But that's kind of the trick, isn't it? Finding a lady in this day and age. Because the lady and the chivalrous knight exist in a sort of symbiotic relationship. Like yin and yang, the one can't exist without the balance from the other. Ladies (not just random misbehaving girls) are deserving of chivalry. They almost command to be treated like ladies by their character and behavior. A lady isn't running around being offended by men holding doors.  Real ladies also aren't grinding against the crotches of perfect strangers on public dance floors or losing count of their sexual partners. (A side note to the girls out there reading this: If you want to be treated like a lady, first you have to act like one... But if you'd rather be treated as a sexual object, that's dandy, too. Carry on.)

Basically, find a lady for your life partner and then treat her like one.

Unless you're into the wild life and enjoy a good tryst... which is fine ... just see it for what it is...

And wear a condom!

And maybe think twice about bringing her home for Thanksgiving... because your sisters will eat her alive.