8 Things I Want My Daughters to Know About Men

Here it is! Different Than Average's very first guest post! (I'm excited. Are you?)

I'll admit to being more than a bit enamored by the author, but it's okay because he's my husband.

Let me know what you think in the comments.


8 Things I Want My Daughters to Know About Men
A Guest Post by Keith A. Webb 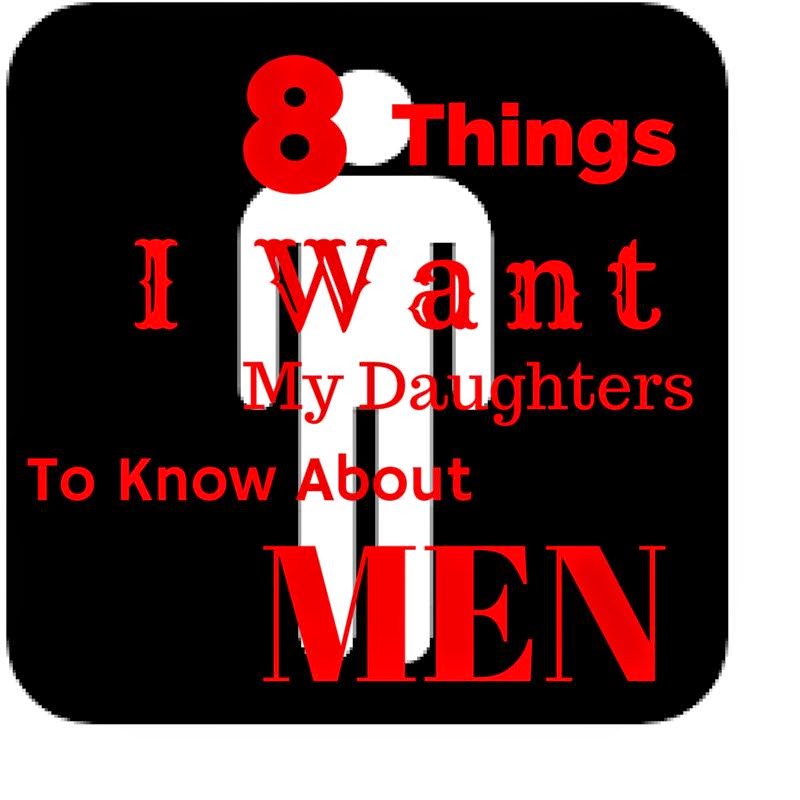 Back in March, Alice wrote a blog, 8 Things I Want My Sons to Know About Women.  It’s a blog flowing with truth and wisdom forged by years in the crucible of parenthood.  It gained quite a readership, so it was, I suppose, an inevitability that someone would eventually ask her, “Why doesn’t your husband write an accompanying blog for your daughters?”  Alice was intrigued and responded with something to the effect of, “I’ll have to ask him.”  Then the reader threw down the gauntlet: “I bet he can’t do it.”

Here, Dear Reader, is my contribution to the cause.

I am the father of two beautiful girls.  As one might expect, I am hyper-protective of them, even though I am sure that they really don’t need it.  Nevertheless, as a father and a man, I know the ins and outs of maleness about as well as such things can be understood - and that fact alone scares the unholy hell out of me.

Lucky for me, my daughters are smart, so they will be far less likely to fall prey to the wiles of rampant male teenager manipulation.  I am, however, their father, and a part of my duties as ‘Dad’ include preparing them for the world out there.

1 - Until they prove themselves otherwise, males are pigs.  It’s been awhile since I was a teenage boy, but I still remember the locker room conversations and the general way that guys talked about girls.  Those scenes you see in movies where guys are talking about which girls do what and what they want to do (or have done) to girls they’ve been ogling - yeah, that stuff happens.

In the inseminator stage in life, men are driven by one simple thing - testosterone.  They are driven by an innate urge to spread their DNA far and wide with as many females of the species as possible.  You don’t want to be one of those females.

Treat men with a healthy dose of caution and skepticism until they demonstrate tangibly and believably that they are interested in you for more than the physical pleasure they can derive from your body.  And even when they come through with a believable expression of love and/or compassion, it’s still a good idea to keep them at arm’s length for a while.

Believe me; you don’t want to be the subject of one of those locker room talks.  Ever.

2 - Despite the gruff outer appearance, men are emotionally intricate.  Sure, they’ll put on the brave face a lot of the time and behave as though nothing bothers them at all, but the truth of the matter remains - men are emotional creatures.  The difficult task for you, dear Daughters, is to sort out which emotions are normal in a healthy relationship, which ones are acceptable in moderation, and which are the sign of potential danger in the relationship.  And given that far too many men are either incapable of or unwilling to talk about emotional topics, figuring things out is that much more of a challenge.
Your mom fell for me when she saw how I treated a turtle.  Yes.  A turtle.  Keep your eyes open for those not-as-noticeable times when a man demonstrates that he’s emotionally capable of more than offering platitudes and taking advantage of you.

Here are a few givens: inappropriate displays of anger, excessive jealousy, debilitating fear, depression, guilt, and lust.  All of these are venom in a relationship.  Gentleness, tenderness, strength of character, bravery, and passion - these are the things of lasting relationships.

3 - Men are not your betters.  This is not intended to be a feminist screed in any sense of the word, but you aren’t required to kowtow to the will of man simply because he’s a man.  You bring a pretty healthy dose of alternate thought and ability to the table of life.  Any man that doesn’t at least acknowledge your talents isn’t worthy of them.  Even better is the man who is willing to recognize your strengths and create a mutually beneficial situation with them - and that applies to work, volunteering, friendships, and romantic relationships.

You have my standing permission to tell any man who attempts to lord his masculinity over you to go play in traffic.

4 - Be careful who you sleep with.  Your mother mentioned this to your brothers, but it goes double for you.  A sexual relationship means different things to guys than it does to you.  Remember the advice in #1above: you don’t want to be the subject of locker room banter.  Beyond that, you’ve got to honestly look at a guy before intimacy occurs and decide if this is a man to whom you want to be emotionally, financially, and legally obligated for the rest of your life.

For you, sex is quite often an emotional event.  Men are far more capable of making sex a purely physical act.  That is the danger - the detachment.  It’s where locker room conversations begin and end.  You are far more likely to be emotionally bound to him than him to you.  Unless you’re prepared for the kind of pain that comes with male indifference after the fact, it’s a really good idea to keep your clothes on.

5 - It’s a lot harder for men to switch off than it is for women.  A little intimacy goes a long way for a guy, and once he’s worked up, he’s hard to bring down.  Once he’s reached the point at which hormones and desire overrule reason, he will push for resolution.  And yes, there’s a danger that he will push harder than you would like.

The smart move is to never reach that point unintentionally.  Don’t allow yourselves to reach the point where he has to come back from the edge or you have to push him away.  The opportunity for frustration, anger, or regret is too great.

6 - Sometimes men want you to take control.  More times than not, the onus to take initiative falls squarely on the shoulders of the man.  While men will usually embrace that responsibility, sometimes they would prefer that you take control of things from time to time.

Start with date night.  You choose the day & time.  You choose the activities for the evening.  Doing so is an opportunity for you to show him your creative side and to introduce him to new ideas and interests - and it allows him to get to know you a little better.  Believe me when I tell you that he’ll appreciate not having the responsibility of planning a winning date for a change.

7 - Men are not mind readers.  What you consider to be an obvious clue, men hear as a casual statement.  “Gee, that sure is a pretty bag,” gets interpreted by a man as, “She thinks that bag is pretty.”  Sure, your birthday, your anniversary, or Christmas may be just a few short weeks away; that doesn’t matter.  The hint isn’t a hint, and the bag you expected will instead be a set of pots and pans and toe socks.If you want a man to recognize the potential for a thing to be a gift, tell him.  If you want him to do something, tell him (note - this isn’t permission to nag; that’s an entirely different point).  If you like something he does, tell him.  Don’t expect a man to read the signals and behave according to your intentions.  You’ll wind up terribly disappointed if you do.

8 - Men are way simpler than you might think.  Despite everything I’ve said above about the relative complexity of the male persona, men are actually very simple creatures.  In general, men desire to be appreciated for their efforts in a variety of areas - work, relationships, home upkeep, parenting, and intimacy to name a few (and you don’t need to start working on those last few for several years, thank you).  A simple ‘thank you’ or ‘you’re awesome’ goes a long way to building a lasting relationship.  Just make sure it’s genuine and deserved.
Posted by ajoneswebb at 10:54 AM